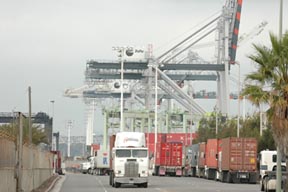 In the United States, there are 361 public ports. The Port of Oakland, the fourth largest, processes about $30 billion of exports and imports annually. Oakland’s enormous cranes, unloading gigantic ships, mean a lot of money is changing hands. But critics say local communities are being short-changed on benefits and plagued with negative impacts. “It’s not a private business, it’s a public agency and its revenue is not profit. It belongs to the people.” So says Rob Smith of Urban Strategies in Oakland.
Tweet
Related Stories:
Global Trade
Transportation 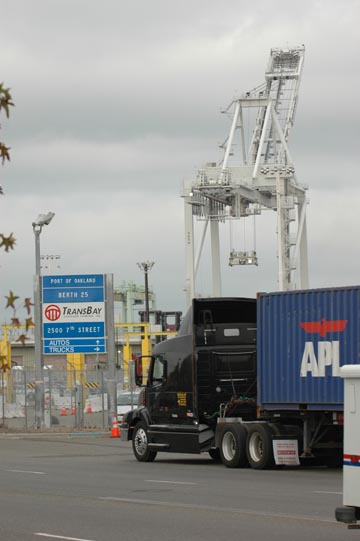 Democracy is not a spectator sport.”  But what happens when you get into the game and participate, only to find that the rules have been rigged against you?
Tweet
Related Stories:
Urban Justice
Transportation

By Guillermo Mayer and Richard A. Marcantonio 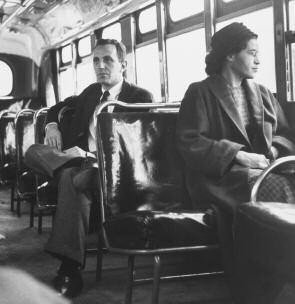 When the late Rosa Parks protested an apartheid bus system 50 years ago, transit riders in Montgomery, Alabama, whether black or white, poor or well-off, all rode the same bus. Today’s segregation, while less obvious, is in some ways more pernicious. Affluent whites have left urban bus systems the way most left New Orleans on the eve of hurricane Katrina: in their cars. Of those who commute on public transit, most now ride deluxe rail systems, leaving people of color to rely on a second-class and deteriorating bus system.

This is the scenario many low-income communities of color face in the San Francisco Bay Area, where substandard bus service operates as a “separate and unequal” transit system. Darensburg v. Metropolitan Transportation Commission, filed in April, 2005 by East Bay bus riders and civil rights advocates against the region’s transportation planning agency, challenges today’s pervasive and insidious form of discrimination.