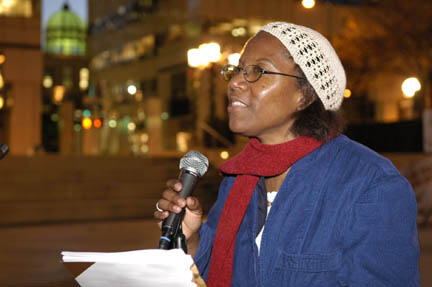 Fifty years after the Montgomery Bus Boycott, transportation equity is still a crucial issue for communities of color across the country. While legal segregation of public transportation is a thing of the past, one only has to step onto any urban bus system to see that racial inequality is alive and well in the United States. The passing of Rosa Parks, a pioneer of transportation justice, reminds us of the distance we have traveled, and is a fitting occasion for a rededication to undertaking the hard journey toward justice.

On December 5th 2005, exactly 50 years after the boycott started, music and poetry rang against the stony façade of Oakland’s city hall as Bay Area bus riders and transportation justice advocates gathered to honor the memory of Rosa Parks. 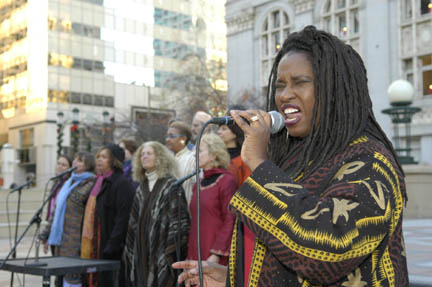 Joy Gospel Choir started the event with passionate songs of celebration and spiritual resistance and their uplifting rhythms were well complemented by  thoughtful reflections from Reverend Ruth Elliot from Allen Temple Baptist Church of Oakland, Joshua Abraham from the Ella Baker Center, and Sylvia Darensburg and Communities for Better Environment, the co-plaintiffs in a discrimination lawsuit against the Metropolitan Transportation Commission (MTC) which controls public funding for Bay Area transportation systems.

Reverend Andre Shumake of the Richmond Improvement Association says that  “for years the MTC has under-funded AC Transit and the transportation needs of low-income people in comparison to highways and rail built to serve affluent suburban commuters.  Service cuts and fare increases caused by MTC’s under-funding mean that today, there is increasingly no seat on the bus at all for the urban poor.” 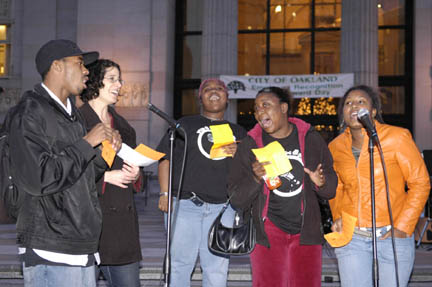 Also onstage for the event were members of Kids First! an Oakland youth group fighting for social justice performed a skit about transportation justice. Kids First organizer Julie Iny, says the students in the group are part of the third generation of activists to follow the paths blazed by Rosa Parks in the 50s--and they want to be the last generation of high school students whose education is compromised by an unjust transportation system.
Iny points out that because Oakland Unified School District doesn’t fund the familiar yellow school buses seen in suburban districts, Oakland high school students rely on AC Transit buses to get to school and to after-school programs.  On the bus, they sit--or stand--with the  other nearly 80% of AC Transit riders who are people of color.  Iny reports that because AC Transit doesn’t  provide enough buses to cover the routes to school,  the buses that Kids First members ride are crowded, messy and unreliable.  She says it’s not unusual for children to be late for school because an overcrowded bus passed them by while they waited at a poorly lit bus stop with no shelter.   Rounding out the picture—because of the fact that the Bay Area Metropolitan Transportation Commission (MTC) refuses to fund AC transit or any other operator, to prioritize the needs of low-income people bus fares are high--61 % of students surveyed by Kids First have had to use their lunch money to pay for transportation to school.

According to Richard Marcantonio, an attorney with Public Advocates, lawyers in the suit against MTC “As a result of MTC’s knowingly discriminatory funding practices, AC Transit riders receive a public subsidy of only $2.78 per trip while CalTrain passengers receive more than five times that - $13.79.”  As a result of this unequal funding AC Transit has been forced to cut bus service and raise fares.

The event was sponsored by Urban Habitat.  Urban Habitat works in partnership with low-income communities and communities of color to advance social, economic, and environmental justice in the Bay Area region and beyond. Urban Habitat is building a democratic society in which all communities have the power to influence and benefit from the decisions that impact their neighborhoods.