Oakland -- On Monday September 28, at 6:00 p.m., there will be a
hearing at the Oakland Housing Authority in the commissioners meeting
room that is designed to assist in the further taking of Oakland's
public housing units from the poor, through the promotion of the
proposed LHAP (program) being discussed to facilitate the disposition
of over 1,600 public housing units, from Oakland's poor.

Rebuilding efforts in St. Bernard Parish, a small community just outside New Orleans, have recently gotten a major boost. One nonprofit focused on rebuilding in the area has received the endorsement of CNN, Alice Walker, the touring production of the play The Color Purple, and even President Obama. But an alliance of Gulf Coast and national organizations are now raising questions about the cause these high profile names are supporting. 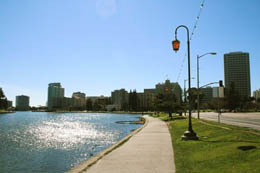 Last year, when I told friends I was moving to the Bay Area, they would all respond with equal parts joy and jealousy. "The Bay? Man, you're going to love it. The weather, the culture, the politics -- they've got all that." When I told them I was going to be living in Oakland specifically, the responses started to sound a little different. "Oh shit, The Town? You better watch your back." While folks were still down with the left-leaning, hip-hyphy, biracial baby that is the city of Oakland, they also made sure to tell me that this baby would jack me for my stroller if I wasn't smart.

But those were just scare stories. Right? Growing up in Washington, DC in the mid-90s, I'd seen both the reality and the exaggerated stereotype of the "murder capital." Violence at my high school and in some neighborhoods was all too real, but it was also an excuse for suburban commuters and absentee politicians (in this case, Congress, which controls DC's purse-strings) to disinvest from those same schools and neighborhoods, creating further inequality and violence.

On September 1, San Mateo Superior Court Judge Steven Dylina granted plaintiff's motion for a preliminary injunction in the closely watched Oberle v. Page Mill Properties class action lawsuit. The injunction will bar Page Mill and its related companies from collecting or enforcing rent increases that do not comply with the limits of the East Palo Alto Rent Stabilization Ordinance. The ruling represents a major setback for Page Mill's plans in East Palo Alto. 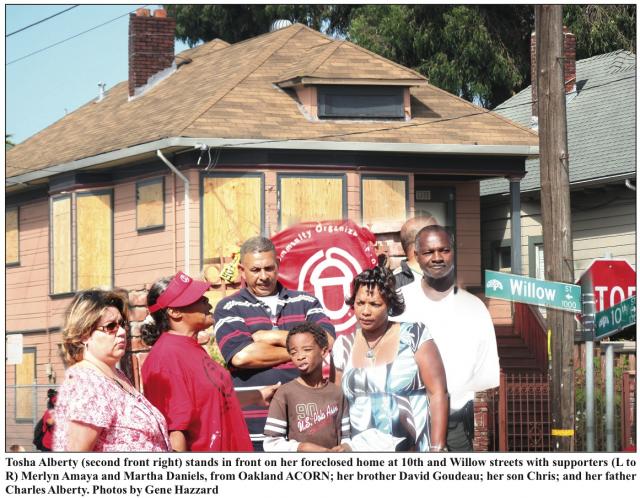 By Ken A. Epstein

Tosha Alberty, holding back the tears, stood in front of her West Oakland house Tuesday, explaining how she, her chil- dren and grandchildren had been evicted that morning from their home by the Alame- da County Sheriff’s Depart- ment.

“I’m here, standing by the grace of God, doing all I can to keep this home,” said Alber- ty, who was born and raised in West Oakland and had bought the home at the corner of 10th and Willow streets in 2005. “Who are they helping with all the (bank bailout) money?” she asked. ”I need the money. I’m a worker, and I’m trying to raise my children.”

The sheriffs had forced their way into the home at 8 a.m. while Alberty was at work. The children were moved out onto the street, with many of their possessions still inside the home. The locks were changed and the windows boarded up. She has the organized back- ing of Oakland ACORN, as well as help from the offi ce of County Supervisor Keith Carson and City Councilmem- bers Rebecca Kaplan, Desley Brooks and Nancy Nadel.

At the time of this week’s eviction, with the backing of ACORN she had headed off two previous eviction attempts, and she was under the assump- tion that negotiations with the bank were still under way. When Alberty originally purchased the home, she paid $550,000 and had monthly payments of $3,800. Though she was unemployed at the time, a real estate broker ar- ranged a loan and told her that she would be able to refi nance in six months, she said. The family struggled to make their payments. Alberty found a good job – as a union employee working for the county – where she continues to work today. For two years, despite how high the payments were, she paid her mortgage on time and never missed a pay- ment.

Then her payments went up about $1,000 a month more, and she and her family could no longer pay. The mortgage Alberty called the bank to ask for help but was told there was nothing they could do, she said.