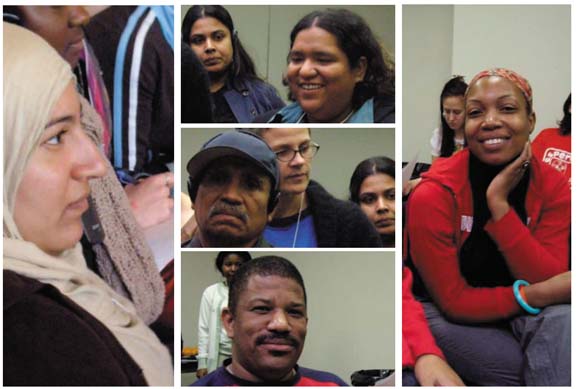 “The only way change is going to happen is from the bottom up.”

I believe that popular education starts from personal experience and builds a deliberate intentionality about trying to help people look at the conditions and issues they are dealing with on changing things and making things better.

I first heard about popular education when I was doing HIV prevention work in San Francisco with immigrant women. I started learning about some of the models that had been used in Latin America with immigrant communities, like the promotora de salud model. The premise of promotora de salud was that people in the community were the best messengers to other folks in the community. That was my introduction to popular education as a tool to help individuals learn and as a method of empowering and organizing communities.

Through my work, I became more and more convinced that movements need to be led by the people most affected. The way to do that is not to just go in and say, “This is what you’re going to do.” you need to start from where people are and honor their experiences. Immigrants and poor people in general are always being told that their knowledge and experiences don’t matter. Folks have a lot of self-esteem issues because the education system has failed them, and they believe it’s their fault—they think they’re stupid and dumb and ignorant. Popular education has the potential to strengthen their self-esteem around their own life experiences.

I always go back to the experiences of Mujeres Unidas y Activas (MUA) in the Bay Area. When women come to MUA, they are not thinking about organizing. They are coming in because they have issues that need to be resolved, urgent issues. Domestic violence is a big issue for a lot of women. They come in seeking help and support. MUA deals with some of the immediate survival issues and provides a great deal of support. Over the course of a couple of months, women start getting involved in some of the organizing, leadership, and political activities that MUA does.

This happened with a campaign to defeat Prop. 187.[1] It was a very grassroots-oriented campaign, but a lot of the folks affected by the proposition were not voters. They felt like they needed to do something, that they couldn’t just sit with their arms crossed. MUA got involved. We started trying to figure out the role for immigrant communities in these electoral campaigns that were targeting them. Strategies developed to let immigrants know about the bill and to help educate other members of the Latino community—this happened throughout the anti-immigrant campaigns in the ‘90s, throughout all the other bills with immigration-law changes, through the 1996 Illegal Immigration Reform an Immigrant Responsibilty Act (IIRAIRA) and welfare reform stuff. We developed a popular theater workshop that Mujeres members would perform to educate and elicit conversation in the base.

Transformation happens within people. In many cases, immigrant women come in feeling like they’re worth nothing. They’re afraid to talk and to participate in a public hearing or a protest; they’re afraid just being out there. The fact is that their vulnerability as undocumented immigrants really hasn’t changed—if anything it’s gotten worse, because things keep getting worse. But they become stronger and stronger as they participate and become leaders and support other women to become leaders. I’ve carried their model with me to the South to give people concrete examples of how they can organize.

When I first got to Highlander, we had a program designed to support the formation of grassroots Latino immigrant organizations here in the South. It was an important program because it gave people the opportunity to gather periodically and network with each other and break their isolation, both geographical and psychological. You have immigrant communities in some very rural areas of the south, hostile areas that are dealing with a growing immigrant population for the first time. The opportunity for immigrants to share with other folks what they’re living with and to realize they’re not alone—that it’s happening in other communities—is really critical.

That was an important first step. When immigrants are starting out in a place with no infrastructure and no other organizations supporting them, there is a tendency to try to address the entire range of needs of the community. People see immediate needs, so they try to form a Hispanic or Latino community center. People are working under tremendous pressure, with no opportunity to take a more strategic view of what’s needed. So there’s not a lot of community organizing in those initial stages. They are surviving in the service provision model, which is necessary but limited in its potential for change.

Grassroots leadership in communities is critical. We felt that leaders had the potential to transform how organizing was approached and to spur more organizing. So part of it was helping communities figure out why organizing as a strategy was important and why it was crucial to build people’s organizing skills.

INDELI really provided people with a different model for what leadership is. When people hear, “This person’s a leader,” they tend to think of the individual, charismatic, boss-type leader. But we were offering leadership trainings focusing on collaboration, with the idea that anybody can be a leader. We believed that leadership could be exerted differently to create more democratic organizations and avoid some of the downfalls of many grassroots organizations.

Another aspect of INDELI was to give people concrete organizing and organizational skills— know how to facilitate a meeting, how to recruit people, how to assess the needs of your community.

The third component was political education focused on bringing in an anti-oppression framework, so people could see their struggles connecting with other people’s struggles. Particularly here in the South, immigrants should know more about the struggles and history of the African-American community. Political education also looked at the framework and particulars of the debate on immigration. The Fall 2005 Sensenbrenner bill was the perfect laboratory to test the organizing skills that we were trying to help people develop and to try to analyze the political dynamics around immigration reform.

One of the ongoing issues is that well-established organizations in the South like the Farm Workers Association (Florida) and El Centro (Durham, North Carolina) have been around for a while—they have resources. At the same time, the demographic shift in the South has been different in different states. Georgia and North Carolina have had Latino communities for more than 15 years and have had a chance to build organizations. Other places—Kentucky, Tennessee, Mississippi—are just starting to see the immigrant influx as a visible, palpable presence. So the varying development of the immigrant community has implications for where they are organizationally.

For instance, the longstanding, funded organizations are really different than a group of two to three people who are gathering to try to form something but don’t even have a consolidated organization. Likewise, a group of people who come in with an idea of organizing is very different than an organization that is primarily services, and so on. We were looking for organizations that were really grassroots, and there weren’t that many. We realized that we had to be flexible and open to some of the people who did not yet have a full political framework but did have a sense of their work being connected to social justice—whether or not they were actually organizing at that point.

Providing a Framework for Change

We had a clear sense of what we wanted to do: form small organizing committees in communities to teach people how to do “know your rights” workshops and use that as a tool to organize people. Folks weren’t ready for that. A lot of folks came back and used the “know your rights” workshop that we had, but it was on their timeline, not ours. That’s part of what it makes it popular education—you have your methodology and plan, and it can go out the window. The information was useful for people; they just weren’t ready to go out to do a workshop yet.

That’s why we had such a heavy emphasis on political education and skills-building: we provided a framework so that people would start changing the way they thought about what they were doing. Instead of just being focused on one particular campaign, they could see how it fit into a broader effort to do movement-building. We saw that clearly in the way folks looked at some of the legislative proposals from last year.

I believe that the only way change is going to happen is from the bottom up. Popular education is a key part of that process.

Based on an interview with Mónica Hernández, Highlander Research and Education Center, New Market, Tennessee, by Diana Pei Wu, National Network for Immigrant and Refugee Rights.

Monica is the lead person on Highlander's Pueblos de Latinoamérica project, which seeks to develop Latino grassroots leadership and organizations in the Southeast. She is also Chair of the Board of the Tennessee Immigrant and Refugee Rights Coalition. A native of Mexico with roots in both countries, Mónica joined the Highlander staff after working at the Northern California Coalition for Immigration Rights in San Francisco for 13 years. At the Coalition, Mónica worked in various capacities: as a hotline operator, HIV prevention educator/program coordinator, community education and action team member and co-director, and executive director.

[1] California Proposition 187 was a 1994 ballot initiative designed to deny undocumented immigrants social services, health care, and public education. It was introduced by assemblyman Dick Mountjoy (Republican from Monrovia, California) as the Save Our State initiative. A number of other organizations were involved in bringing it to the voters. It passed with 58.8% of the vote, but was overturned by a federal court. The measure prompted support for similar bills in Illinois, Florida, New York and Texas.

Download or view a pdf of this article (247KB).

END_OF_DOCUMENT_TOKEN_TO_BE_REPLACED
History of Exploitation: from Slavery to Domestic Work