Four years after they began organizing, workers are still battling the Woodfin Suites Hotel in Emeryville, California. Their fight for decent wages and working conditions sent ripples throughout the community. It fueled a successful drive for a living wage ordinance in the city, and brought together a new coalition advocating for low-wage immigrant workers. 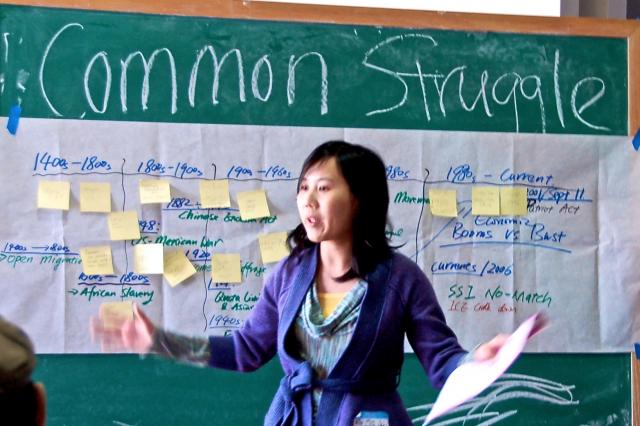 Under the living wage ordinance, Measure C, the Woodfin owes dozens of working immigrant mothers some $200,000 in back wages for shifts they worked in 2006. The hotel pledged to take the matter to court rather than pay up—but the workers say they’re prepared to fight one day longer than their employer.

When I first met the housekeepers at the Woodfin Suites Hotel several years ago, they were hurting. Literally. As one worker, Lorena,* explains:

“I would get home with my feet very swollen, my hands swollen, and with a headache. When we couldn’t finish, they made us punch out after eight hours—and finish off the clock. I even started wondering if we were living in times of slavery. I asked God to open up a way for us to get justice because it was too much.”

Nationwide, the lucrative hospitality industry had been cutting costs by increasing housekeeper workloads—a cost transferred directly onto the injured backs and shoulders of its low-wage workers, most of whom lack health insurance. On top of that, hotels were vying for guests by offering more amenities, like bigger beds and in-room kitchenettes, all of which add to the workload of their already exhausted room cleaners. As Lorena suggests, workers were at a breaking point.

So, in November 2005, the East Bay Alliance for a Sustainable Economy (EBASE), UNITE HERE Local 2850, and the Alameda Labor Council worked with Emeryville voters to adopt an ordinance establishing living wages and fair workload standards for large Emeryville hotels. The ordinance set a modest $9 per hour minimum wage for hotel workers, and required workers to be paid time-and-a-half if asked to clean more than 5,000 square feet of rooms in an eight-hour shift.

But by Spring 2006, workers hadn’t seen the change. Lorena and her co-workers were still cleaning 16 suites per day, each the size of a studio apartment, not the 10 rooms maximum suggested by Measure C. Fed up, dozens of Woodfin workers signed a petition to management demanding their rights, testified at city council, and spoke out in the media.

The Woodfin immediately moved to fire about 20 worker-leaders, including Lorena. The hotel claimed they had received Social Security “no-match” letters for the workers and had no choice but to terminate them, even though many workers had been employed at the hotel for years, and the letters themselves instruct employers not to take any action against workers.

After months of worker actions, growing community picket lines outside the hotel, a statewide boycott, interfaith prayer services, and multiple city complaints and lawsuits, the Woodfin finally brought the workload into compliance with the living wage law. Workload dropped nearly in half. However, by that time, the hotel owed workers around $200,000 in back wages.

Lorena and her fired co-workers never got their jobs back. But that didn’t mean they were going away. A broad-based community coalition raised $50,000 to support them and their families as they staged six-hour-per-day pickets outside the hotel demanding their back wages.

Tired of the worker-led protests, the Woodfin Suites—owned by wealthy San Diego Republican Sam Hardage—used its political connections to have Homeland Security investigate the immigration status of Emeryville hotel workers. In an apparent effort to drive workers from the picket lines, federal Immigration and Customs Enforcement (ICE) agents showed up at workers’ homes, interrogating one leader, Mariana,* in front of her daughter. “Having ICE at my house affected me a lot. I got so sick from the stress that I had to go to the hospital. Then Woodfin brought a racist hate group to our pickets. Sometimes I can still hear their insults,” says Mariana.

Today, over three years since the living wage law went into effect, Woodfin workers still haven’t seen a single penny. Some are owed up to $10,000. The city administration has twice ordered the Woodfin to pay but hotel management has vowed to take their appeals to the Supreme Court. Meanwhile, workers like Lorena and their community supporters are still battling it out on the picket lines and in court, hoping for “God to open up a way.”

As Woodfin workers keep fighting for their back wages, worker justice advocates have seen unscrupulous employers all over the country use raids, deportations, and Social Security “no-match” letters to intimidate immigrant workers from raising workplace standards or joining unions. While such retaliation can be daunting, as Measure C worker-organizer Sarah Norr notes, “People assume that immigrant workers are too vulnerable to organize. But at the Woodfin, we have seen that they are willing to take risks to defend their rights.”
And non-immigrant workers are coming to understand that when some workers are denied their civil liberties, the rights of all workers suffer. “Fighting our employer’s English-only rule, we found that if we want a strong union, we have to fight united,” says Kathryn Lybarger, a gardener and a steward in her union, AFSCME 3299. “But we can’t be united when our immigrant co-workers are under attack. They are some of our strongest workplace leaders.”

For this reason, EBASE decided to help found and staff the Workers Immigrant Rights Coalition (WIRC), a growing alliance of more than a dozen Bay Area labor unions and worker organizations advocating for full labor rights for all workers, for healthy and inclusive communities, and for an end to immigration raids.

“Unions have been organizing low wage workers for years, and employers have frequently threatened to call ICE on worker leaders,” says Wei-Ling Huber, president of UNITE HERE 2850 and chair of WIRC. “But the Woodfin was a clear example of how work authorization policies weaken immigrant workers’ and all workers’ rights to organize. It created a sense of urgency and brought us together in a new coalition.”

WIRC has been fighting back against employer intimidation, leading know-your-rights and political education classes for worker and union leaders, training worker spokespeople, leading mobilizations at local ICE offices, and building consensus in the labor movement for progressive principles for immigration reform. Together, we are building a movement that will protect the rights of Lorena and other brave fighters for workplace justice.

Brooke Anderson is the deputy director at the East Bay Alliance for a Sustainable Economy (EBASE), which is celebrating 10 years of fighting for economic and social justice.