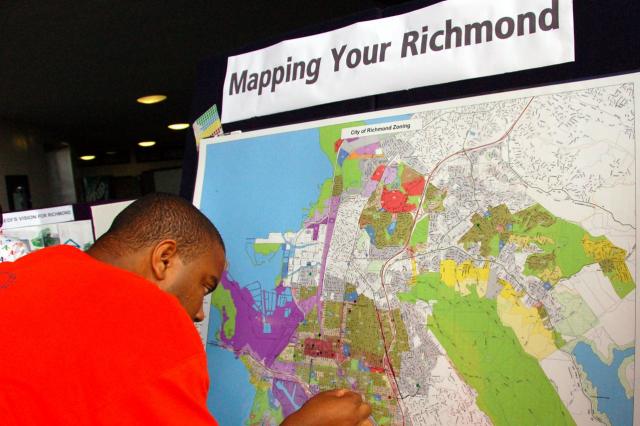 Housing as a human right is under threat, perhaps as never before. Richmond is one of cities most impacted by the housing crisis in the San Francisco Bay Area. Richmond’s Iron Triangle neighborhood, home to St. Mark’s, saw 254 homes go into foreclosure last year.

As Peregrina and others testified, images of abandoned and blighted properties flashed on a wall behind them. The abandoned properties themselves drag down the quality of life in the neighborhood, one resident said. One longtime resident (who wants to remain unidentified) says she is surrounded by foreclosed properties that have been taken over by illegal activity. Drug dealers set up shop in several homes while others are used to traffic stolen property. Someone was gunned down in front of her house. Her friends are afraid to visit and she is afraid to go outside.  “Eventually, something’s going to go down and someone’s going to get hurt,” she says. “Bullets don’t have eyes.” She has called the police department hotline and nobody answers. She has called other city departments, but nothing has been done.

The testimonies evoked tears and outrage, but the church erupted in cheers when Richmond Mayor Gayle McLaughlin and a majority of the City Council members signed on to REDI’s comprehensive housing program and committed to meeting with the group within 30 days to begin making the proposals real.

Already on the ground for two years working on local employment, just cause eviction and fair rents, REDI’s collaborative efforts crystallized with the General Plan Campaign. A city’s general plan defines the type, amount, and location of future growth and development. It guides decisions made by city officials and staff and can have a deep impact on people’s lives. For example, a general plan can require developers to include a certain percentage of affordable housing units in new projects.

When Richmond’s General Plan came up for revision in 2006, REDI saw an opportunity to influence city policies affecting the lives of low-income people and people of color. Through research, community meetings, and trainings with city officials and members of its partner organizations, REDI developed several policy recommendations. One of these called for strengthen­ing Richmond’s Inclusionary Housing Ordinance.
Redi's Housing Platform

Keep Families in Their Homes
Require banks to modify loans to make them affordable. We urge Congress to enact bankruptcy reform as quickly as possible.
Require the State of California to provide clear data on which banks comply with the state moratorium on foreclosures and which banks modify loans.
Pass county legislation requiring banks to identify, disclose, and record all investors on foreclosed properties and to fine them $1,000 a day if they do not comply. Apply the fines to a job training program that rehabilitates homes to “green” standards.
Pass state legislation to protect tenants impacted by foreclosure by allowing families who are paying rent to remain in their homes and requiring any notices or legal documents to be written in the tenants’ native languages.

Create Long-Term Sustainability for Affordable Housing
Adopt a Just Cause Eviction/Fair Rent ordinance.
Modify the law that requires new developments to include affordable housing to make more units available. Increase the in lieu fee so that it covers the actual cost to construct an affordable unit.

Create a Safe and Healthy Living Environment
Adopt city policies and programs to rehabilitate substandard rental housing without displacing existing residents or raising their rents. Require the city to make an annual report on the number of rental units inspected and their general conditions.
Provide a city rehabilitation assistance program to ensure that rental units are maintained and rehabilitated to comply with health and building codes.
Create a city fund for educating tenants on their legal rights under health and building codes.
Use the General Plan to ensure that contaminated lands near current or planned residential areas are cleaned up to meet state health standards and that improvements funded by the city benefit low-income communities.

Delegations of community leaders, residents, and organizers met with elected officials to present this and other recommendations, and a large, well-attended community forum followed.

But land use planning moves at a slow pace. Richmond was supposed to adopt its new General Plan in early 2008. By 2009, a draft had yet to be published—and the housing crisis had thrust itself to the top of the public agenda.

In Richmond, with a population of just over 100,000, more than 2,000 homes were in foreclosure as of March 2009. The Richmond Finance Department projected that 3,000 more would go into foreclosure in the next year. The hardest-hit neighborhoods—the Iron Triangle and North and East—have large populations of African Americans, Latinos, and Laotians, many of whom have low-to-moderate incomes.

REDI’s report, “Transforming the Housing Crisis in Richmond,” [1] indicates that nationally, subprime lenders disproportionately targeted communities of color, regardless of income. The report goes on to describe how in 2004, minority homeownership surged past 50 percent for the first time in history, with a foreclosure rate below one percent.[2] Now, however, minority homeownership gains seen in the past are slipping away, with African American homeownership rates nationwide falling back under 50 percent.2 Black borrowers will lose between $61 billion and $122 billion during this crisis, while Hispanic borrowers will lose between $76 billion and $129 billion.[3] A 2008 United for a Fair Economy report indicates that the current foreclosure crisis will result in the greatest loss of wealth for people of color in recent United States history.[4]

The Universal Declaration of Human Rights identifies adequate housing as one of the most basic human needs and a human right. In the United States, the right to quality, affordable housing is under attack, and the current economic crisis exposes how vulnerable historically marginalized communities continue to be. The current crisis requires accountability from financial institutions and new policies at all levels of government that will keep families in their homes, revitalize neighborhoods, and promote affordable housing.

REDI developed its Housing Platform to guide organizing and program development towards these goals. (See box above.) The platform, as presented to Richmond officials at the March 12 Town Hall, includes modifying loans so they are affordable; establishing a community land trust composed of foreclosed properties purchased from banks; a city revolving home loan fund; tenants’ rights education programs; passing just-cause eviction and fair rent legislation; and funding employment-training programs to teach residents to rehabilitate homes according to green standards.