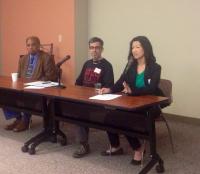 More than 50 people from 28 different organizations joined us for the re-launch on March 27. Our opening panel (RP&E Editor Emeritus Carl Anthony, APEN Executive Director Miya Yoshitani, CCHO co-director Fernando Marti, and Reimagine Project Director Jess Clarke) grounded us in our shared history and affirmed the need we see for this project.

“The environmental movement has introduced the concept of deep history,” Carl Anthony said. “We’re the end point of 13.7 billion years of life on this planet, and we need to begin thinking of that as our heritage,” he said. Fast-forwarding, he noted the great displacement of African Americans with the transatlantic slave trade—somewhere between 7.5 and 12 million African slaves crossed the Atlantic between 1500 and 1800, compared to around 1.5 million Europeans. Slavery, along with the genocide of Native Americans, was part of the expansion of the global economy, “this capitalism we struggle with,” the system underlying the toxic racism and regional inequities RP&E has spotlighted since its first issue 24 years ago.

One of RP&E’s first issues looked at the effects of environmental racism on Asian-American communities, and prompted the creation of APEN, according to Miya Yoshitani. She participated in the first People of Color Environmental Summit in 1991. From the beginning, she said, “‘We speak for ourselves’ was a basic EJ tenet.

“That was what Race, Poverty &amp; the environment helped us to do, to speak for ourselves, to form our own stories, do our own research and explain how our communities are affected by the cumulative impacts of environmental pollution plus the degradation of poverty plus racism and classism,” she said. Today that role is no less critical. “We aren’t going to get the regenerative economy we need unless communities of color that have been most impacted by the previous economy are in the center of the frame, can see themselves in the stories that we tell about the future we’re building. Places like RPE absolutely critical to spreading that frame,” Yoshitani said.
Fernando Marti challenged us to think of ourselves as cultural workers, moving beyond policy and ideology to work on the levels of values and stories, and set those stories in context.
“In San Francisco as evictions have skyrocketed and cranes are everywhere building new luxury housing, the gist of the mainstream media conversation about housing is always about trickle-down economics, supply and demand,” Marti said.
“When there is a human story about eviction, it’s about an individual incident, not about displacement. The challenge we’ve had is how to reframe the issue as “housing for all,” how to have a conversation that’s about housing supply, talking about the stability of communities, a story that isn’t just about isolated cases but shows the very concerted efforts to break communities, move people out, and move the resources they depend on, the commercial space, the non-profit services.”
After the panel, we broke into work groups that spoke to the overlapping, intersecting nature of the issues that concern us: housing, transportation and urban planning; climate justice, environmental justice and extractive industries; and women and economic justice. These groups generated pages of story ideas for the reimagined RP&E. Here are just a few highlights of their brainstorms: 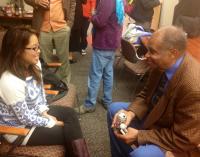 The housing, transportation, and planning group talked about

—The new geography of race/the suburbanization of poverty and its impact on organizing. (Antioch is the only Bay Area city with a growing African-American population. Who lives there? How did they get there?)
—How the free MUNI for Youth movement ties back to civil rights struggles, 50 years after Freedom Summer and the passage of the Civil Ri
ghts Act.
—How the city of Richmond, faced with the ongoing foreclosure crisis and the displacement it causes, is using the power of eminent domain to help save housing. Can this model spread, and where’s the resistance?

Discussion in the climate justice, environmental justice and extractive industries group centered around the concept of “Just Transition,” with Richmond as an example of a community fighting to shift away from the toxic extraction economy. 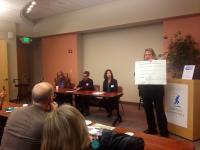 —How can we create a vision and build the power to fight for it?
—Where else are communities organizing for local control and resiliency, and making translocal connections?
—What is the impact of other proposed solutions to climate change, especially cap and trade?
—What is happening in the ongoing fights against “extreme energy,” such as fracking and exploitation of tar sands? What are the pitfalls of a “ban only” strategy? 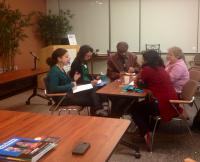 The womn and economic justice group looked at

—The intersection of low-wage work and women’s work—especially with the increasing commodification of “care work,” such as child care, elder care and domestic work.
—Who provides care and who purchases it? The new tech app for hiring domestic workers highlights the role of the tech industry in creating inequity in the Bay Area, particularly San Francisco.
—The confluence of women’s work and low-paid work is nothing new; look at the historical perspective, including the attack on welfare and public assistance.
—Some groups in the Bay Area have tried “new” models for collective childcare. We have history as well as current practice.
—Many EJ issues have specific impacts on women—the endemic violence against women that comes along with extractive industries, for example.

The Reimagine production group is envisioning April 24 as a giant story conference. Writers, photographers, radio producers and videographers will be able to sit down with the organizers and activists in each work group and get background and resources to jump-start the priority stories identified by the work groups. We’re also open to other work groups starting, as new people join the project.
Updates (Legacy term) Delete?
Tweet