The economic development deal usually offered to low-income communities is very much like a bad trade deal: it offers minimal jobs and ignores environmental sustainability. The jobs created tend to be the dirtiest and most dangerous and—especially in the case of retail—jobs without living wages. The result is unchecked degradation that pits unions, environmentalists, and communities against each other. The only winners are the businesses that profit from the divide.

The Coalition for Clean Air and Safe Ports in Oakland, a blue-green partnership of local environmental groups, unions, faith-based organizations, workers, and community groups, has embarked on an innovative campaign to reverse the old development standard and make the port work for all. While the shipping industry booms at the Port of Oakland, neighboring communities and the truck drivers who work there choke on a cloud of smog. Fixing port trucking for workers and the community is one key to unlocking this cycle.

Container trucking at ports is where pollution, low wages, danger, and inefficiency meet. Heavy-duty trucks produce 30-40 percent of the pollution at ports, making them a significant health hazard. Groups such as the West Oakland Environmental Indicators Project have long pushed the Port for more accountability on the environmental impacts associated with this industry. Their studies show there is five times more diesel exhaust per person in the communities surrounding the Port of Oakland than in other parts of the city. Residents near the ports are plagued by asthma and bronchitis, and have some of the highest incidences of cancer in the region. Truck drivers also experience the effects of direct exposure to exhaust. 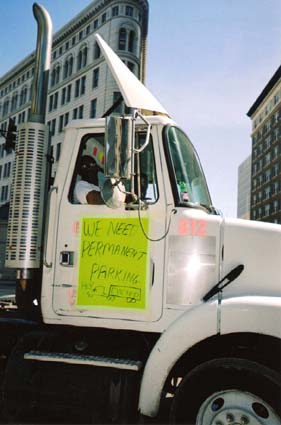 Port trucking is like working in a sweatshop on wheels.1 Because they are misclassified as independent businesses, drivers have no employment protections. Paid by the load instead of the hour, drivers spend up to half their time—with engines idling—waiting at the port to transfer loads. Motor carriers they work with have little incentive to speed up the wait times. At this point, drivers are struggling to pay for fuel and rent, and have little power to improve their conditions. Drivers must purchase their own trucks, so they often buy aged rigs that lack modern safety and clean air technologies.

At the Port of Oakland, over 100 small motor carriers contract with over 2,500 truck drivers. Motor carriers undercut each other in pricing in a race to the bottom with razor-thin margins. The sector is plagued by inefficiency, instability, and a driver shortage.

Drivers have poverty-level earnings with median income of $25,000 after truck expenses.2 The majority of workers are immigrants; many are undocumented.3 Turnover is high, making it nearly impossible to monitor who has access to the port. The Port of Oakland, which handles over one million containers a year, offers truck replacement incentives to reduce pollution, but that only addresses one piece of the puzzle.4 We need a holistic vision in order to serve drivers, community members, and the shippers that use the ports.

The Port ranks among the top four in the nation and top twenty in the world in terms of annual container traffic,5 but the “global gateway from the West Coast to the world” hasn’t been sharing those benefits with the community closest to it.

To move ahead, we need to create new relationships with the Port of Oakland. The Coalition for Clean Air and Safe Ports in Oakland advocates that port trucking must be included in the Port of Oakland’s purview. The Port needs to take responsibility for the trucking operations on its property, just as it does for the concessions which operate on Port property at the Oakland Airport. At the Airport, businesses who win contracts for concessions are expected to meet minimum operating standards. For the trucking industry at the Port, this would mean clean, fuel-efficient trucks, off street parking that frees the neighborhood from unnecessary truck traffic, union scale wages, and clear recognition of the truckers’ employment rights, including of course, their right to form a union and engage in collective bargaining.

Together, we can create a new model that promotes environmentally and economically sustainable growth. This sort of organizing, to hold a public agency accountable to the standards the community demands, can create stable, quality union jobs, which will create lasting benefits to the economy of the region. Truckers will have employment protections, employers will have incentives to switch to clean technologies, ports will have more checks in place for safety, security, and efficiency, and communities will have cleaner air and quieter streets.

1.    “Clearing the Air: Reducing Diesel Pollution in West Oakland.” A West Oakland Environmental Indicators Project Report by the Pacific Institute, in conjunction with the Coalition for West Oakland Revitalization, November 2003.

Doug Bloch is the coordinator for the Coalition for Clean Air and Safe Ports in Oakland. Reach him at dougbloch@changetowin.org.