Community Benefit Agreements, says Cecilia Estolano, the new executive director of the Los Angeles Community Redevelopment Agency, “work best when there is substantial agency money invested, when they’re big projects, and when they’re in hot markets or emerging markets.” In much of Los Angeles—in much of urban America—none of those conditions pertain. Which compels Los Angeles Alliance for a New Economy (LAANE), now the primary architect of Community Benefit Agreements (CBAs) across Los Angeles, to go project by project, creating an archipelago of decent living standards in a sea of working-class stagnation.

Working often in close partnership with a Los Angeles city council member from Hollywood, Jackie Goldberg, LAANE has steadily enlarged the scope both of CBAs and the living-wage ordinances within Southern California. Its successes have inspired unions and community organizations across the nation to create their own campaigns linking growth to justice. Living wage ordinances have now been enacted in more than 120 municipalities across the country, while CBAs—which now may require developers not merely to provide decent jobs to local residents, but to build affordable housing, parks, health clinics, and other social amenities—have been implemented on at least 48 major projects from Seattle to Miami.

This is, of course, justice by increments, but in the absence of a federal government interested in raising the minimum wage, providing health coverage for all, or enabling workers to join unions, incremental justice is as good as it gets. So it falls to the states to hike the minimum wage, and to more liberal cities to enact living wage ordinances covering employees of city contractors. And for now, even in a city as liberal as Los Angeles, passing an ordinance mandating CBAs for projects that aren’t recipients of city funding or redevelopment district tax abatements is not possible.

Even though they are negotiated on a project-by-project basis, CBAs have become, in less than a decade, the way that major developments get built in Los Angeles. For one thing, while CBAs clearly impose additional costs on the developer, they also help ensure that the project will get green-lighted. “The best way to get our project approved is to join with the community,” says Cliff Goldstein, a partner in J.H. Snyder, one of Southern California’s largest commercial developers. “Once we’ve crafted an agreement, we walk hand-in-hand downtown to the council. We become a formidable foe if someone wants to make us their foe.”

Birth of a CBA

Since Goldberg and LAANE first established the CBA in a project in Hollywood, a distinct process has emerged on subsequent projects. One group—often, but not always, LAANE—organizes residents in the vicinity of the proposed project, and links pre-existing community organizations and institutions with other affected parties: the building trades unions that want to construct it, the building maintenance unions (usually, the SEIU), and the hotel union (UNITE HERE) that may staff the facilities the project will contain, and environmental organizations concerned with the effects of the project on the area. The local council member may serve as a liaison to local institutions—community colleges, for instance—that will be called on to offer job training to local residents hired by the project. 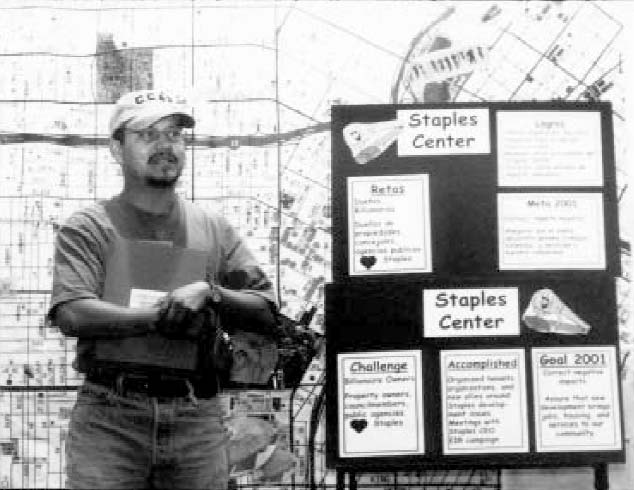 The expanding scope of CBAs is apparent in looking at the agreements crafted for three major projects over the past half-decade. In the late 1990s, two right-wing billionaires—Rupert Murdoch and Denver’s Phil Anschutz—announced that they wished to develop the area surrounding the Staples Center, home to the Lakers, with luxury hotels, condos, stores, office buildings, and theaters. A coalition of 25 community groups from the area—a neighborhood consisting largely of desperately poor immigrants—already had come together to deal with problems of housing relocation, increased traffic, and the like. Separately, Miguel Contreras, head of the Los Angeles County Federation of Labor, entered into negotiations with the developers on behalf of five unions that sought to represent the parking attendants and the hotel, theater, and maintenance workers who would get permanent jobs once the project was completed, and the building trades unions that would construct it. The unions reached an accord with the developer first, but refused to sign it until the community groups reached their own accord, which included a commitment to hire half the permanent employees from the neighborhood, to set aside one-fifth of the new housing units for low-income residents, and to create neighborhood parks. Once these accords were reached, the city council gave the go-ahead for the project, which is under construction today.

LAANE crafted an even larger and more diverse coalition in dealing with the proposed expansion of Los Angeles International Airport, which had been stymied for more than a decade when Mayor James Hahn finally sought council approval for the proposal, shortly after he took office in 2001. In deference to labor’s political clout, Hahn had given Contreras a seat on the Airport Commission, which helped ensure local hiring, living wages, and union contracts for workers at the airport’s many concessions and retail outlets. Also, the city committed $500 million over the next decade to noise abatement improvements in the schools near the airport and to air-quality improvements throughout the area. “The muscle of the labor movement was the linchpin” in broadening the coalition, says LAANE’s Executive Director Madeleine Janis, since it was apparent that Contreras’ commitment to a far-reaching CBA ensured that a deal would be struck. “It convinced the environmental movement—the Environmental Defense Fund, the Coalition for Clean Air, the Natural Resources Defense Council—to switch its approach from suing at the back end, to helping come up with solutions at the front end.”

On the one hand, the range of community benefits continues to grow with the varied needs of the impacted communities. On the other hand, both in Los Angeles and in cities around the country, the vast majority of CBAs contain no genuinely enforceable language covering the wages and benefits of workers in the retail establishments that the project owners lease. Only where the city itself has owned the development—that is, at the airport and at a new mixed-use project slated for development across the street from Frank Gehry’s Disney Concert Hall—have retailers been required to set pay rates in accord with the city’s living wage ordinance. “The problem is, unionized supermarkets and Costco are the only retailers to pay a living wage,” says Roxana Tynan, who is now LAANE’s chief negotiator of CBAs. Most CBAs require the developer to seek out retailers who will pay such wages. The agreement at one North Hollywood project even imposes some manageable financial penalties on the developer, J. H. Snyder, if it fails to have its retailers pay a living wage to a specified percentage of their employees.

But if CBAs have often failed to raise the pay levels of non-supermarket retail workers, they have plainly boosted the wages of the construction workers who build the developments, the janitors who clean them, and the workers who staff the markets, hotels, and theaters (if not clothing stores) therein. Between 2000 and 2006, 104,000 construction jobs and 113,000 permanent jobs were covered under CBAs, according to an estimate from the Partnership for Working Families, the national coalition of local CBA advocacy groups.

Surprisingly perhaps, in cities where the NIMBY (Not In My Back Yard) mentality has routinely blocked development, many in the business community welcome the emergence of this growth-with-justice political constellation. Economist Jack Kyser, who as vice president of the private Los Angeles County Economic Development Corporation is the closest thing the city has to a business community spokesperson, is no fan of living-wage ordinances or, more generally, increased regulations on business. He has kind words, though, for CBAs, which he believes, often “defuse the opposition to very high-profile projects. Purists may say this is not the best way to go. But if you want to get something built, especially in an area as contentious as L.A. can be, it’s a good way to go. You get your project, and everybody benefits.”

The success of CBAs in Los Angeles, and the willingness of LAANE to commit its resources to the development of kindred campaigns in other cities, means that CBAs and the coalitions demanding them have now sprung up in roughly 20 cities across the nation.

To some degree, of course, the scope of a CBA is a function of the power of the forces demanding it. It is hardly an accident that these local strategies first appeared in cities with strong unions, organized neighborhoods, and progressive city councils. CBAs are inherently a second-choice strategy, a narrow attempt to create broadly shared prosperity at a moment when broad attempts that rely on state policy or large-scale unionization are beyond the horizon of the possible. Their limited scope notwithstanding, they represent a considerable achievement—intellectual, organizational, and political—at a time when working-class America is otherwise losing ground. And if more of America were organized, there would be more such local achievements, as well as more complementary national policies.

This excerpt is reprinted with permission from Harold Meyerson, “No Justice, No Job Growth,” The American Prospect, Vol. 17, No. 11: Nov. 05, 2006. All rights reserved.

Harold Meyerson is editor-at-large of The American Prospect and political editor and columnist for the L.A. Weekly.