Paving the Road Out of Poverty

The crisis in America’s urban communities of color takes many shapes, but underlying these various manifestations are problems of economic segregation and persistent poverty. The emerging consensus among community leaders and advocates is that addressing lack of income and wealth must be at the top of the urban agenda.

Our organization, East Bay Alliance for a Sustainable Economy (EBASE), is a labor-based economic justice organization, dedicated to raising standards and building power for working families. Along with our sister organizations in the national Partnership for Working Families network, we are confronting poverty and economic inequality through a two-part strategy: expanding access to family-supporting employment and improving job quality. For urban community activists skeptical about labor’s record on race, we hope that EBASE’s work and that of our allied organizations will illustrate how new partnerships and new policy models are directly benefiting communities of color, while building a revitalized labor movement.

Expanding Job Access: Running Ahead of the Boom in Richmond

The inner urban community of Richmond, California, whose residents are overwhelmingly people of color, has long struggled with persistent poverty. EBASE’s research found that while there is no shortage of high-wage jobs in Richmond, they are disproportionately held by non-Richmond residents. Richmond residents face unemployment or employment in low-wage jobs that cannot possibly sustain a family.

Today, Richmond stands on the brink of a development boom. The city’s large tracts of undeveloped or underdeveloped land and waterfront proximity are attracting developers, speculators, and higher income residents from other Bay Area markets. Locals openly wonder whether lower income Richmond residents will be squeezed out during the city’s impending economic expansion.

Advocates took notice when Richmond’s Local Employment Ordinance (LEO), requiring local hiring for public works construction, was set to expire in the fall of 2004. The Richmond Equitable Development Initiative (REDI), a collaborative including EBASE, Urban Habitat, and Contra Costa Faith Works, decided to make renewing, expanding, and strengthening the LEO a centerpiece of its efforts for equitable development in Richmond. Connecting residents with living wage employment is a key anti-displacement strategy; it stabilizes low-income communities and enables residents to weather neighborhood change. REDI reached out to allies in the Contra Costa Central Labor Council and Contra Costa Building Trades Council, as well as leaders in Richmond’s faith communities and neighborhood councils. EBASE and Contra Costa Faith Works took the lead in developing a policy proposal that expanded the LEO to cover city-subsidized developments, applied it to operational jobs (those beyond the construction phase of projects), strengthened enforcement, allocated staff resources to monitoring, and increased the local hiring requirement from 20 percent to 30 percent for most jobs.

Some business groups and City Council members initially feared that placing any requirements on city projects would hamper growth. REDI responded to these concerns with an “inside-outside” strategy: negotiating and working cooperatively with city staff and businesses, while also mobilizing residents and community leaders to demonstrate support and demand action. In July 2006, the City Council approved a proposal that achieved nearly all of REDI’s goals for improvement of the LEO. Projections indicate the policy will expand access to 2,000 permanent jobs and 5,000 construction jobs in the coming years. Of equal importance, the campaign built solidarity between community, labor, and faith organizations around a common agenda of good jobs.

Moving forward, EBASE, Urban Habitat, and the other partners in the REDI collaborative are working on a campaign to ensure that the city incorporates equitable development principles into all its planning decisions. The City of Richmond is currently in the process of updating its general plan which is the master plan for all development and zoning decisions. This updating process is an opportunity for Richmond to create a general plan promoting equity for low-income and people of color residents in the areas of housing, health, land use, transportation and economic development. EBASE is working with REDI on researching how the city’s general plan can promote economic development that encourages businesses to pay higher wages and benefits.

Three years ago, Eva Benitez was a housekeeper earning $8.75 per hour at a hotel in Emeryville, a small, heavily commercial city nestled between Oakland and Berkeley. “Not a single housekeeper can afford the rents here in Emeryville,” explains Eva. “We can’t afford the $160 per month medical plan either…. Our workload has gone up every year. Today we are cleaning more than 14 suites per day.” Injuries at work are common, because of the heavy equipment and the dangerous ergonomics involved in cleaning the rooms.

To raise standards for the Emeryville hospitality industry, EBASE and Local 2850 of UNITE HERE (the hospitality union) put Measure C, a hospitality industry living wage initiative, on the ballot. Emeryville voters passed it on November 2005. EBASE had already advocated successfully for several local living wage policies, including a 2002 ballot initiative covering 3,000 workers at the Port of Oakland. Measure C, however, was the first industry-targeted employment standards law of its kind in the country. It not only guarantees workers a living wage, but also sets maximum safe workload levels for room cleaners. 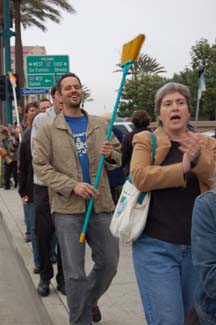 After passage, workers began to organize and demand their rights under Measure C. In response, Woodfin Suites hotel began to intimidate and harass workers. One outspoken worker was fired, and management claimed, among other things, that the law would get immigrant workers in trouble with immigration authorities. In October, nearly 30 workers were given written notices claiming the company had found problems with their social security numbers, and that they could not continue to work at the hotel unless they corrected the problem. Some workers believe these notices were issued in retaliation for their support of Measure C.

Workers remain uncowed by the intimidation. They’ve organized protests, filed a class action lawsuit to claim back wages owed to them under Measure C and to stop retaliatory firings, and called for a boycott of the hotel. “If we stand up for our rights here, then it won’t just help us, it will help many people who work in other places,” explains Alma Cruz, a housekeeper at the Woodfin since it opened six years ago. “We are very few here in this hotel, but if the people realize that we can win by uniting, that will have a big impact. We can help people realize that they have to inform themselves of their rights and then defend them, no matter where they work.”

Bringing it All Together

Perhaps the most inspirational example of the two-fold strategy of expanding job access and improving job quality in the last year was the Hotel Workers Rising campaign. This national campaign to elevate standards throughout the American hospitality industry raised issues much bigger than a standard labor negotiation. Hospitality workers—overwhelmingly people of color—asserted their right to join the middle class, just as factory workers and construction workers had done before them. Workers won significant victories: raising wages, winning pensions, and maintaining access to health insurance. 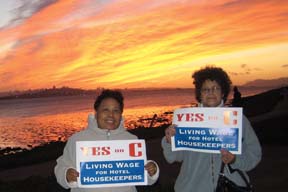 At the same time, hotel workers challenged the racial hiring and employment standards of the hospitality industry. Like many other sectors, the industry has replaced most of its African-American workforce with immigrant Asian and Latino workers, often at lower wage and benefits standards. Hotel workers called for and won the creation of an industry task force and a commitment to dismantle hiring barriers for African-American workers. They also won a landmark code of conduct for ethical treatment of immigrant hotel workers, and pushed the hospitality industry to join the union in lobbying for comprehensive immigration reform. In an era when desegregation policies are under attack and anti-immigrant sentiment dominates public policy, hotel workers and their union won important protections for workers of color largely outside of public policy, directly in the workplace. “Our members understand that they are not just fighting for themselves, they are fighting for all working people,” sums up Anand Singh, organizer with Local 2 of UNITE HERE. “That’s what it means to build a movement.”

Download or view a PDF of this article (378 KB)