Visit urbanhabitat.org/rpe/research to read from our collection of
research and resources on racial, economic and environmental justice.

Melting Pot Cities and Suburbs: Racial and Ethnic Change in Metro America in the 2000s 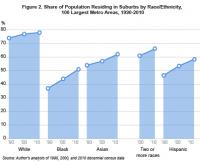 Old images of race and place in America are changing rapidly. Nowhere are these shifts more apparent than in major U.S. cities and their suburbs. An analysis of data from the 1990, 2000, and 2010 decennial censuses reveals that: Hispanics now outnumber blacks and represent the largest minority group in major American cities. The Hispanic share of population rose in primary cities of the largest 100 metropolitan areas from 2000 to 2010.  Across all cities in 2010, 41 percent of residents were white, 26 percent were Hispanic, and 22 percent were black. Well over half of America’s cities are now majority non-white. Primary cities in 58 metropolitan areas were “majority minority” in 2010, up from 43 in 2000. Cities lost only about half as many whites in the 2000s as in the 1990s, but “black flight” from cities such as Atlanta, Chicago, Dallas, and Detroit accelerated in the 2000s. Minorities represent 35 percent of suburban residents, similar to their share of overall U.S. population. Among the 100 largest metro areas, 36 feature “melting pot” suburbs where at least 35 percent of residents are non-white. The suburbs of Houston, Las Vegas, San Francisco, and Washington, D.C. became majority minority in the 2000s. More than half of all minority groups in large metro areas, including blacks, now reside in the suburbs. The share of blacks in large metro areas living in suburbs rose from 37 percent in 1990, to 44 percent in 2000, to 51 percent in 2010. Higher shares of whites (78 percent), Asians (62 percent), and Hispanics (59 percent) in large metro areas live in suburbs. 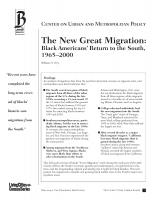 An analysis of migration data from the past four decennial censuses at regional, state, and metropolitan-area levels indicates that: The South scored net gains of black migrants from all three of the other regions of the U.S. during the late 1990s, reversing a 35-year trend. Of the 10 states that suffered the greatest net loss of blacks between 1965 and 1970, five ranked among the top 10 states for attracting blacks between 1995 and 2000. Southern metropolitan areas, particularly Atlanta, led the way in attracting black migrants in the late 1990s. In contrast, the major metropolitan areas of New York, Chicago, Los Angeles, and San Francisco experienced the greatest out-migration of blacks during the same period. Among migrants from the Northeast, Midwest, and West regions, blacks were more likely than whites to select destinations in the South. Atlanta and Washington, D.C. were the top destinations for black migrants from all three regions; white migrants moved to a broader set of areas including Miami, Phoenix, and Los Angeles. College-educated individuals lead the new migration into the South. The "brain gain" states of Georgia, Texas, and Maryland attracted the most black college graduates from 1995 to 2000, while New York suffered the largest net loss. After several decades as a major black migrant "magnet," California lost more black migrants than it gained during the late 1990s. Southern states, along with western "spillover" states like Arizona and Nevada, received the largest numbers of black out-migrants from California.

Captive Constituents: Prison-Based Gerrymandering and the Distortion of Our Democracy

By the Political Participation Group

Most state and local governments count incarcerated persons as residents of the prison communities where they are incarcerated when drawing election district lines, despite the fact that prisoners are not integrated into those communities and are not residents there. This practice, known as “prison-based gerrymandering,” artificially inflates the population count—and thus, the political influence—of the districts where prisons and jails are located. At the same time, this practice reduces the political power of everyone else. The viability of our communities, integrity of our democracy and basic principles of equality suffer as a result. The United States Constitution requires that election districts must be roughly equal in size, so that everyone is represented equally in the political process. Elected officials (with the exception of United States Senators) must represent roughly the same number of people, and each constituent is entitled to the same level of access to an elected official. This is known as the "One person, one vote" principle.

By Wendy R. Weiser and Lawrence Norden
Legislators introduced and passed a record number of bills restricting access to voting this year. New laws ranged from those requiring government-issued photo identification or documentary proof of citizenship to vote, to those reducing access to early and absentee voting, to those making it more difficult to register to vote. In total, at least nineteen laws and two executive actions making it more difficult to vote passed across the country, at least forty-two bills are still pending, and at least sixty-eight more were introduced but failed. As detailed in this report, the extent to which states have made voting more difficult is unprecedented in the last several decades, and comes after a dramatic shift in political power following the 2010 election. The battles over these laws were—and, in states where they are not yet over, continue to be—extremely partisan and among the most contentious in this year’s legislative session. Proponents of the laws have offered several reasons for their passage: to prevent fraud, to ease administrative burden, to save money. Opponents have focused on the fact that the new laws will make it much more difficult for eligible citizens to vote and to ensure that their votes are counted. In particular, they have pointed out that many of these laws will disproportionately impact low-income and minority citizens, renters, and students—eligible voters who already face the biggest hurdles to voting.
Related stories:

This Changes Everything; Occupy Wall Street and the 99% Movement 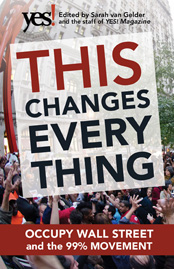 The Occupy Wall Street movement named the core issue of our time: the overwhelming power of Wall Street and large corporations— something the political establishment and most media have long ignored.

But the movement goes far beyond this critique. This Changes Everything shows how the movement is shifting the way people view themselves and the world, the kind of society they believe is possible, and their own involvement in creating a society that works for the 99% rather than just the 1%.

Attempts to pigeonhole this decentralized, fast-evolving movement have led to confusion and misperception. In this volume, the editors of YES! Magazine bring together voices from inside and outside the protests to convey the issues, possibilities, and personalities associated with the Occupy Wall Street movement.

This book features contributions from Naomi Klein, David Korten, Rebecca Solnit, Ralph Nader, and others, as well as Occupy activists who were there from the beginning, such as David Graeber, Marina Sitrin and Hena Ashraf. It offers insights for those actively protesting or expressing support for the movement—and for the millions more who sympathize with the goal of a more equitable and democratic future.

Tweet
‹ On Occupy: Roundtable Discussion with Angela Davis and Rev. James Lawson up