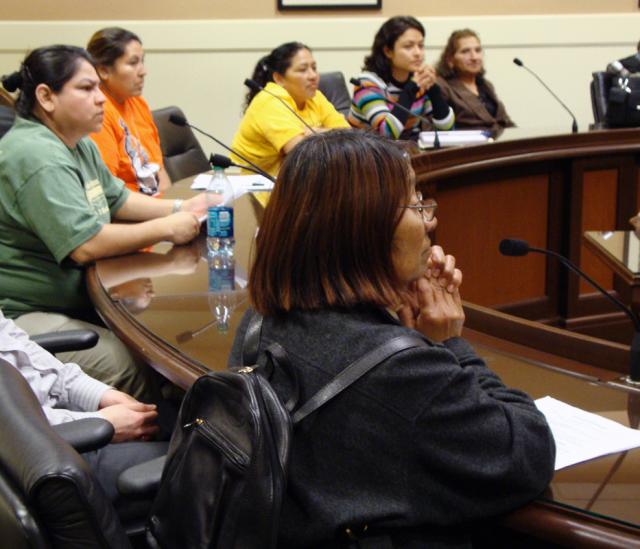 The Coalition, made up of Bay Area groups, such as Mujeres Unidas Y Activas, POWER (People Organized to Win Employment Rights), La Colectiva de Mujeres of La Raza Centro Legal, Filipino Advocates for Justice, as well as the Grayton Day Labor Program, and Southern California groups like the Pilipino Worker Center, Coalition for Humane Immigrant Rights of Los Angeles (CHIRLA), and Instituto de Educación Popular del Sur de California (IDEPSCA), is working on a bill that would expand worker protections to domestic workers and improve working conditions for low-income women of color who clean homes and take care of children and the elderly.

In 2009, the Coalition brought over 100 domestic workers together to create a list of demands for protections already available to other workers, such as overtime pay, Cal/OSHA safety standards, and worker’s compensation. And some that are unique to domestic workers, such as the right to at least five hours of uninterrupted sleep and the right to cook one’s own food. “My employer would give me food that was five days old. She told me I had to eat it because she didn’t want to waste it,” said Anali Padilla of POWER, highlighting the fact that the fight for domestic worker rights is often a struggle for basic respect and human dignity.

In 2010, the Coalition created and lobbied for a Domestic Worker Resolution, a non-binding document requiring legislators in Sacramento to vote on whether they agreed that the domestic work industry was exploitative and that legislative changes to the industry were necessary. Thanks to the support of Assembly members Tom Ammiano and Manuel Perez, the resolution passed on August 23 with a 21-13 vote. To celebrate this victory, the Coalition organized a press conference on the very day that the New York Domestic Worker Bill of Rights was signed into law.  On both coasts, domestic workers rallied, cried, and cheered to celebrate their growing movement.  After all, a victory for domestic workers is a victory for workers, women, immigrants, and people of color everywhere!

Meg Whitman made headlines by exploiting domestic workers in her very own home. However newly elected Governor Jerry Brown has the opportunity to fight the exploitation of this vulnerable workerforce. In this political moment, and with leadership from hundreds of domestic workers across the state, the California Domestic Worker Coalition is hoping the climate is right for its very own Domestic Worker Bill to become law in 2011.  There are many needed allies in this struggle. Will you join us?

Beatriz Herrera is an organizer for the Women Worker’s Project at POWER (People Organized to Win Employment Rights).

END_OF_DOCUMENT_TOKEN_TO_BE_REPLACED

END_OF_DOCUMENT_TOKEN_TO_BE_REPLACED
History of Exploitation: from Slavery to Domestic Work