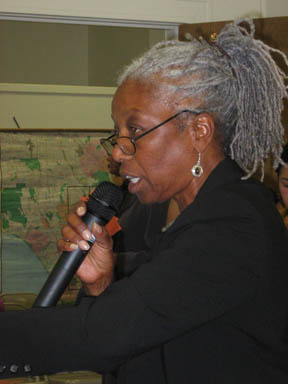 "Will you sign our petition calling on the Mayor to “re-energize our communities with Green?” asks Oreatha Ensley, as she walks door to door in the South Los Angeles neighborhood where she has lived for over 38 years.

Ensley and a cadre of predominately African-American and Latino community leaders are initiating a community-led effort for Strategic Concepts in Organizing and Policy Education (SCOPE), a Los Angeles-based grassroots organization. They are collecting signatures from black, Latino, Asian, and white working class families throughout Los Angeles’ inner city neighborhoods for a petition to create a sustainable, equitable, and clean energy economy that will bring quality jobs to their communities, create a healthier and safer environment, and promote community-based land use planning and economic development. They apparently have struck a chord with the community.

The Long and Bumpy Road to Apollo
When she came to Los Angeles in pursuit of a better quality of life, Ensley already had a history of fighting for rights in the workplace and in the community. Growing up, she had participated in the Civil Rights Movement in her hometown of Moultier, Georgia; and her participation in a statewide teachers’ strike for higher wages and more teaching materials cost her first teaching job in Tampa, Florida. In 1968, Ensley migrated to Los Angeles, where she taught Biology and Physical Education and became active on educational issues. Today, Ensley represents her South Los Angeles community on the Los Angeles Apollo Alliance Steering Committee along with representatives from 20 other progressive community, environmental and labor organizations.

The Apollo Alliance is a national initiative of diverse sectors united behind a vision of shifting the nation’s energy dependency from fossil fuels to renewable and sustainable energy sources and practices. The Alliance brings together non-traditional allies—community organizations, environmental advocates, construction and electrical workers, and progressive businesses—around a shared agenda of shaping the development of a green industry to address the needs and interests of each sector.

“In South Los Angeles, disinvestment of resources and jobs has crippled the community,” says Ensley, a mother and grandmother. “I wasn’t sure what my community’s response would be to an initiative that puts jobs, training, and improving the environment together as top priority solutions to the poverty that our families experience everyday. I expected some folks to tell me that jobs are number one and cleaning our environment is just a nice wish. Instead, they told me that it’s about time we reinvest in our community, because we are slipping away further into poverty and getting sicker because of it.”

The sentiment is echoed by most inner city, working class families of South Los Angeles who have experienced over 30 years of declining manufacturing and union jobs, disinvestments, and environmental decay in their communities. As a matter of fact, it’s an economic and environmental trend that is quite familiar to poor communities of color in many American cities.

Global Thinking at Local Cost
With a redeveloped downtown designed to attract the affluent to the inner city, and an upgraded infrastructure to facilitate the movement of goods through the region Los Angeles is positioning itself in the global economy.  Meanwhile its low-income communities of color remain firmly on the sidelines. As rents and property values skyrocket, about one-third of the households in the Los Angeles area are struggling to make ends meet. One in four Latinos and African-Americans live in poverty [1], and a single parent with two children needs to earn over $45,000 to be self-sufficient.[2]

Furthermore, Latinos (66 percent) and African Americans (50 percent) are more likely to live near hazardous waste sites than whites.3 Pollution and degrading environmental conditions are contributing to high rates of asthma, cancer, diabetes, and other health problems among communities of color.In fact, globalization appears to have made some trends systemic to both, the established African-American communities like Ensley’s, and the more recent immigrant communities: 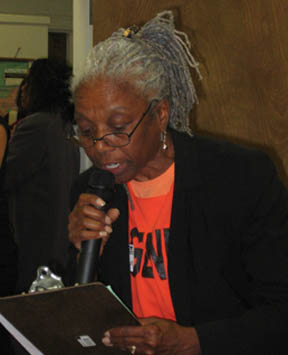 All Signals Synchronized to Green
After 13 years of grassroots organizing and policy campaigns in Los Angeles, the ground is ripe for seeding a new green regional economy. SCOPE initiated and convened the Los Angeles Apollo Alliance in February 2006, in recognition of the strategic opportunity to win larger-scale, long-lasting systemic policies that can significantly impact regional trends and conditions.

“My experience and my knowledge of history have taught me that social change comes when people from all walks of life unite and fight,” says Ensley. “No one person, organization, or constituency can do it alone. We have to build multiracial and dynamic alliances. In Los Angeles, we have been working overtime and reaching out to non-traditional partners… we believe that we can find common ground, strategize, and shape a progressive ‘green economic development’ agenda. We can share our expertise, build our collective capacity and vision, and develop the necessary political trust with one another to achieve systemic change.”

In the current political landscape, under the leadership of Mayor Villaraigosa, a liberal-leaning City Council and forward-thinking Commissioners have articulated a bold vision to make Los Angeles a national leader in the transition to a sustainable, equitable, clean energy economy. The L.A. Apollo Alliance hopes to make a substantial contribution towards this vision by organizing a new progressive majority.

“What we are trying to achieve here in Los Angeles is not just the creation of professional jobs, but a working-class solution to poverty. There are no shortcuts or mysteries to achieving this vision. A progressive political alternative is possible by involving communities most impacted by poverty… unions that represent working families in Los Angeles, organizations advocating for a healthier environment, and socially responsible business leaders,” asserts Ensley.

A Seven-tiered Approach to Greening
The LA Apollo Alliance plan is to develop and implement a Green Industry Campaign, based on the following achievements over the next three- to five-year period:

In addition, the Los Angeles Apollo Alliance hopes to count among its members, at least 25 community-based organizations, unions, environmental advocates, and progressive businesses with a shared trust and a collective capacity to develop and win initiatives that move towards systemic change.  Also, SCOPE’s contribution hopes to build a network of 100 Neighborhood Education Teams responsible for educating and mobilizing 10,000 neighbors as part of a strategy to increase participation of low-income communities of color in the public policy-making process.

Building Strength with Numbers
In recent years, the progressive movement in Los Angeles has largely been on the defensive, constantly fighting new battles just to meet the basic needs of poor and working class communities of color. The recent legislation that undermines immigrant rights and the on-going cuts in wages and benefits by corporations are just two examples. Apollo hopes to make the progressive voice louder and harder to ignore by building strategic alliances.

Says Ensley, “When we are united in our efforts, we are stronger, and not in danger of being played off against one another.”

Also, the fact that Apollo’s anchor organization, SCOPE, has led other multi-sector alliances and successfully influenced policymaking with a grassroots agenda in the past, gives hope to this new strategic initiative.

Elsa Barboza is a campaign coordinator for Strategic Concepts in Organizing and Policy Education in Los Angeles.