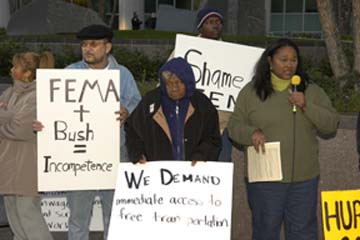 Was Hurricane Katrina the worst “natural” disaster in American history? Or was it man-made?   The documentary film, “Rising Waters: Global Warming and the Fate of the Pacific Islands”[1] illustrates some of the key impacts of global warming in what the Alliance of Small Island States calls “extreme weather events.” Nations and peoples that have anticipated and controlled flooding for thousands of years are now experiencing uncontrollable super-sized floods, hurricanes, and tornados. Island and coastal nations that previously had effective mechanisms to protect themselves from terrible but predictable weather events are now overwhelmed, as coral reefs—those natural levees against flooding—are being destroyed by warmer ocean temperatures. These torrential winds, rains, and floods go beyond any definition of “normal,” yet the system tries to pass them off as natural disasters.

“The total amount of energy the hurricanes release—a figure calculated from wind speed and duration—has increased over the last 50 years by somewhere between 50 to 80 percent,” says Kerry Emanuel, professor of atmospheric science at Massachusetts Institute of Technology and author of “Divine Wind: The History and Science of Hurricanes.”

In a recent article in the journal Science, Peter J. Webster of the Georgia Institute of Technology, and colleagues write that the past 15 years have seen nearly twice as many category four and five (on the Saffir-Simpson scale) hurricanes around the world as in the period between 1975 and 1989.[2]

Barry Commoner has argued that the development of the massive horsepower car, the proliferation of diesel and other fossil fuel-based transportation, and the use of chemicals to tackle problems previously resolved in eco-friendly ways, has increased toxic emissions since World War II to unprecedented levels in the history of the world. The auto, oil, and highway industries contribute to the production of greenhouse gases that generate global warming and climate change, which in turn cause the extreme weather events that are imposed on vulnerable peoples, resulting in illness, dislocation, homelessness, despondency, and death.

Entire communities, mostly poor and of color, are thus being destroyed by global warming.Following the 2004 Indian Ocean tsunami—the most deadly earthquake and flood in recorded history—several Third World commentators observed that we should specifically say that the tsunami killed between 170,000 to 250,000 “poor” people. Because, by and large, with the exception of some unfortunate tourists, it was the poorest of the native populations, living in the most vulnerable areas, that absorbed most of the tsunami’s impacts. And that’s how it is throughout the world. The disenfranchised people end up as human sacrifices to the Western god of profit.

While most of the post-Katrina discussion has been on the fragile condition of the levees, the under-funding of levee repairs, and the fiasco of the Bush dismantling of FEMA, in a paper entitled, “Unnatural Disaster: Louisiana’s Crisis in Policy and Planning,” authors Brian Azcona and Jason Neville focus instead on how the destruction of the wetlands through corporate development has undermined one of nature’s ways of mitigating the impact of hurricanes:  “…In the last century, over 1.2 million acres of land have disappeared, in large part as a consequence of land misuse—that includes oil, gas, and timber extraction; industrial, commercial, agricultural, and residential development.” Economic development reduced the absorbent capacity of the region, while simultaneously increasing runoff and toxicity.A climate justice approach to the matter should begin with a demand for: (a) regulation of corporations and their “individual choice” to pollute; (b) mandated increases in auto fuel efficiencies; (c) reductions in the use of toxic substances; (d) expansion of public transportation systems; and (e) transparency about the chemicals and greenhouse gases produced by corporations and institutions.

Translating this sentiment into action, we would like the ‘reconstructed’ New Orleans to have many auto-free zones and auto-free days. We envision a comprehensive, federally-funded, clean-fuel bus, jitney, bicycle, and pedestrian-centered city with a public transportation system that would not contribute to global warming and combat transit racism.

Climate justice proponents should demand dramatic reductions in emissions from Louisiana’s oil refineries in Cancer Alley, the 85-mile stretch on I-10 between New Orleans and Baton Rouge, and from the grain elevators and steel plants. They should call for the preservation of the wetlands, and a moratorium on highway expansion, coastal development, and gambling boats that come inland to set up coastal enclaves.

As a matter of fact, in its most progressive manifestation, this ‘green’ reconstruction effort would create a city in which people, particularly low-income black people, and not the autos, the highways, and the chemical plants, are prioritized.

A Clarion Call for “Effective Right of Return”
A central tactical demand that has united the black and progressive movements across the Gulf Coast and throughout the United States, is the “right of return” for the 350,000 black residents of New Orleans and of other Gulf Coast cities. If the black evacuees are not aided in their return, there will be no material base for black power and no political base to challenge the racist institutions in New Orleans, in Louisiana, and in Washington D.C. Areas with a black majority population are critical to any possible reversal of policies that contribute to racism and oppression and they must be fought for, as if all of our lives depended on it.


Without a plan to prioritize the return of black people to New Orleans, relocation has taken the form of mass kidnapping and the forced dispersal of refugees. As Beverly Wright of the Deep South Center for Environmental Justice, observed: “We need to [look] beyond ‘right of return’ to ‘effective right of return.’ We need plane tickets, bus tickets, housing, and a job, or at least government benefits waiting for us when we do return. We cannot allow the Bush Administration and the Louisiana white Democrats to support the forced dispersal of New Orleans and Gulf Coast evacuees to ‘new homes’ in Houston, Boston, Los Angeles, and Utah, which effectively cements their disenfranchisement. Black evacuees must, every one of them, be allowed to return home!”[4]

President Bush claims that New Orleans will “rise again,” but who will live in it? And who is reaping the benefits of the rebuilding process? The massive reconstruction project currently underway to address the engineering problems of a city below sea level is already characterized by government bailouts and pork barrel projects for the corporate elite. And while the poorest sections of New Orleans are expected to take years to rebuild, many of the more affluent and white sections already have basic services and will most likely form the core of the reconstructed city’s population. The only people of color in this new, white majority New Orleans, will likely be the working class Blacks and Latinos who clean people’s houses or work at WalMart.

At the moment, it looks as if the prediction of Beverly Wright, Saladin Muhammad, and other Gulf Coast organizers is all set to come true and New Orleans is well on its way to being “whitewashed.” It will take a unified multiracial movement with a strong, progressive black leadership, and a solid plan to reconstruct New Orleans from the bottom up,[5] to reverse the trend.

Fortunately, the movement to challenge the current racist redevelopment plan is already in motion. The People’s Hurricane Relief Fund is demanding that the federal government “provide funds for all displaced families to be reunited.” The fight for a Black Reconstruction must involve the guarantee that New Orleans will be rebuilt as a black-majority city and returned to its pre-Katrina population of 500,000. And there should be a thoughtful debate on a future urban plan that goes beyond merely rebuilding the levees and waiting for the next hurricane season. ?

Eric Mann is director of the Labor / Community Strategy Center in Los Angeles.