Everyone Has the Right to... From the Editor

When Roosevelt gave this speech, the depression still lingered on. The official figure for unemployment in California was at 11.7 percent. As it happens, in March 2009, California was once again facing an unemployment rate of over 11 percent, the highest since 1941. Today, the politics of fear and the ubiquity of want have many calling for a new “New Deal.” In this issue of Race, Poverty and the Environment we take a look at the kind of organizing needed to win social and economic rights for all. 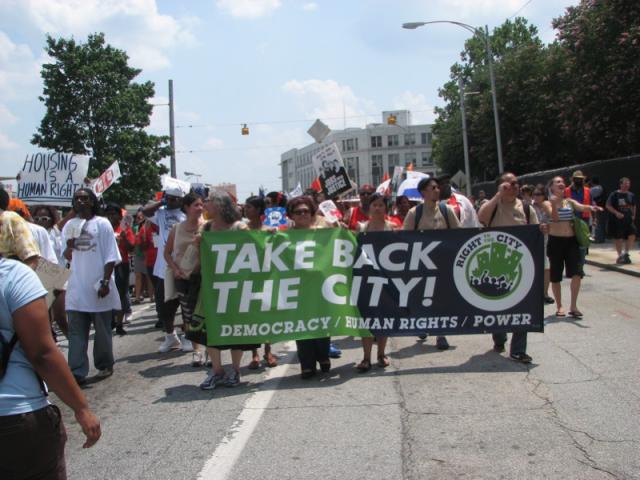 As the current recession deepens, fundamental rights to housing, employment, healthcare, and safety continue to retract. As usual, low income people and communities of color bear the brunt of the economic crisis. Foreclosure and unemployment rates in African American communities are double the national averages. The tragic murder of Oscar Grant on New Year’s Day in Oakland by a transit police officer is emblematic of how even straightforward civil rights to life and liberty are in daily jeopardy.

While civil rights organizing has a long and successful history in winning social justice in the United States, a broader human rights framework—which includes the rights to housing, employment, healthcare, and safe communities—has less often been central to building mass movements. In this issue’s roundtable discussion on rights, participants discuss ways in which this platform is being brought into existence in organizing campaigns in cities and counties across the country (and around the world).

As David Harvey says in his interview with Amy Goodman, the “Right to the City” Alliance and parallel campaigns across the world are raising questions about democratic control of public resources and even private priorities. Capitalism has always depended on state intervention to reconfigure itself following the inevitable financial collapses brought on by monopolies and speculation. But workers have also sometimes succeeded in using these crises to meet their own needs. Despite the fact that the Obama administration refused to attend the recent United Nations conference on racism and has taken reparations for African-American slavery “off the table,” grassroots agitation for redistributive justice is on the rise.

Article 25, which declares “Everyone has the right to a standard of living adequate for the health and well-being of himself and of his family, including food, clothing, housing and medical care and necessary social services…” is the inspiration for this issue’s cover art.*

The silver lining in the current catastrophe is that ever more people—including many who previously refused to consider alternatives to capitalism—are understanding that the existing system is fundamentally flawed, and broad based coalitions for structural change are becoming a reality?

This issue’s cover photo by Robert Terrell and Jean McIntosh and the illustration on page 4 by Art Hazelwood are excerpted from the traveling exhibition. Hobos to Street People: Artists’ Responses to Homelessness from the New Deal to the Present presented by the California Historical Society and curated by  Art Hazelwood.  (See page 78 for details of the exhibition.)