A Place to Hang a Hat: Property Rights and the Law

The Oprah Winfrey Show threw a spotlight on Sacramento’s tent cities in March 2009. Now, more than 100 homeless people will move from encampments to apartments and other temporary housing as part of a compromise between the city, its homeless residents, and area nonprofits.

The homeless folk will be allowed to bring their stuff along this time—and given safe storage for it.
A year and a half prior to this settlement,  a class action suit was filed against Sacramento for civil rights violations incurred when police and sheriff’s deputies confiscated homeless people’s belongings during sweeps. Usually, homeless people are issued citations for “abandoning property” and sometimes their belongings are destroyed.  Often, this is standard procedure in most cities nationwide. 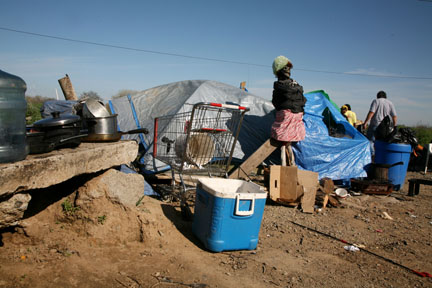 In short, they said they deserve the right to have a place to keep their stuff as much as housed people do.

When the term “property rights” is bandied about, usually it arises from companies who assert their dominion over the assets they own and reap profit from. Seldom does one hear such arguments from individuals, let alone poor and homeless ones.

The property seized from homeless people is often necessary survival gear: clothing, sleeping bags, identification, medicine, and other items that those with homes can take for granted. By necessity, such materials are carried in bags and trucked along in shopping carts; often, no notice is given when they are taken away. The loss of personal security accompanies a loss in housing. People who stay in shelters with no storage facilities usually keep their belongings nearby for fear of theft.

Human rights activists argue that people’s personal safety and security of their possessions is an extension of the right to housing under the U.N. Declaration of Human Rights.

More than likely, the city and county of Sacramento were less concerned with such lofty ideals and more with the precedent set by a similar case last year in Fresno, where homeless people were awarded $2.3 million.

Such payouts—or any negotiations between governments and their unhoused citizenry—wouldn’t be necessary if every one had a place to hang their hat.

T.J. Johnston writes for Street Sheet and Street Spirit, newspapers serving the homeless community and their allies. His work also appears in Newsdesk.org and the Poor News Network.