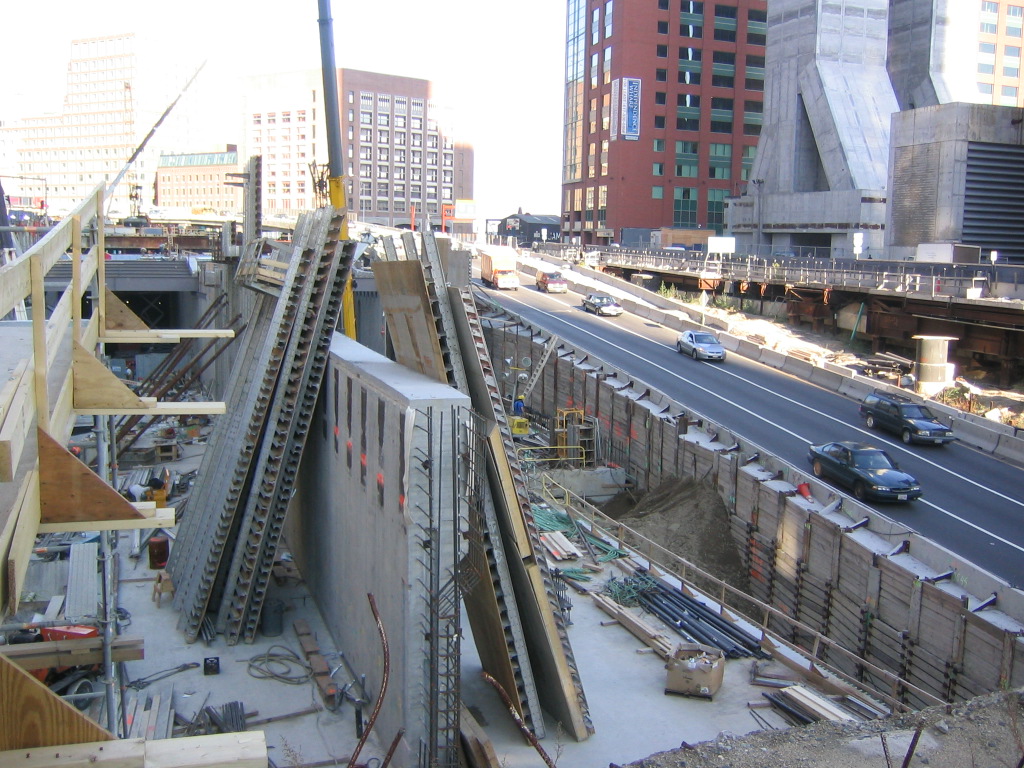 It’s not surprising that Bechtel was chosen as the designer and manager for Boston’s “Big Dig,” a massive highway construction project which has turned out to be one of the most expensive public works projects in United States history. San Francisco–based Bechtel has been in the construction business for more than 100 years and has carried out some of the largest civil engineering projects in the United States, including the Hoover Dam, as well as thousands of projects all over the world. Also key, Bechtel had close ties with the Reagan administration, which was in office at the time Massachusetts politicians were seeking the federal funding that made the Big Dig possible. Reagan administration Secretary of State George Shultz became Bechtel’s president after his term in office, and he still sits on the company’s board of directors.

The Big Dig is the Boston Central Artery tunnel project, in which Interstate 93 passes under the city. The project carved out a new and wider underground highway directly beneath the elevated central artery in downtown Boston. It primarily serves people outside of Boston who are traveling into the city.

The history of the Big Dig is a case study of the way in which corporations are able to balloon their profits on transportation projects with the help of politicians who protect them from oversight, while inner city communities’ transportation needs remain under-funded or ignored.

In 1990, when Boston started work on the Big Dig, the city also entered into an agreement to build public transportation projects to mitigate pollution caused by the Big Dig. According to a lawsuit filed by the Conservation Law Foundation, it was unjust for the state to spend billions of dollars on a roadway for people outside the city at the expense of people who live inside the city. The transit commitments were meant to serve the communities most affected by the construction and pollution, and several of these commitments were to projects that would improve public transit in the inner city.

Despite accepting the bill for over a billion dollars in Bechtel-caused cost overruns, now the state is saying there is not enough money to complete a number of the projects that would serve low-income, people of color communities.

For example, the communities just to the east of Boston, including Chelsea, which is one of the poorest cities in Massachusetts, are served by the blue line of Boston’s T. The blue line stops abruptly about half a mile from the section of Boston where a large number of jobs are available. It does not connect to the red line, which passes through the jobs corridor on which are the stops for Massachusetts General Hospital—the state’s biggest employer—Harvard, MIT, and numerous biotech and research labs. Under the transit mitigation agreement, the state was to connect the blue line to the red line with a half-mile tunnel. Now the state is trying to take this project off the table.

Another transit commitment that the state is trying to evade is the restoration of the Arborway Line, which was a trolley line that went to Jamaica Plains, a very economically diverse community in Boston that includes some of the poorest housing projects in the city. In 1980, the Massachusetts Bay Transportation Authority (MBTA) ripped up the trolley tracks and promised to replace them. The restoration of the trolley line was part of the transit commitment agreed to by the state. Now the state wants to replace this project with another one.

The Conservation Law Foundation is suing the state, governor, secretary of transportation, and all the other officials who are responsible for following through on these commitments that would benefit low-income people and people of color in and around Boston. But because Massachusetts taxpayers are so sickened by the amount of money that has been paid to Bechtel and other companies for the Big Dig, it’s become very difficult for community groups to win more funding for urban transit.

The Big Bill
The Big Dig was supposed to cost taxpayers $2.5 billion, but the final price tag was an unprecedented $14.6 billion. Rather than be punished for these cost overruns, Bechtel was rewarded with gross revenues of $2 billion. Not only were there cost overruns, but the Big Dig also became infamous for everything, from leaks in the tunnel system to delays and flawed designs. Meanwhile, Massachusetts politicians did not oversee Bechtel and did not charge the company for its errors and mismanagement. Instead, these problems were paid for with taxpayer dollars.

For example, a year-long Boston Globe investigation revealed that at least $1.1 billion in construction cost overruns were caused by Bechtel’s mistakes, including incomplete and error-filled designs, and the company’s failure to survey and measure the elevated roadway before the construction began. In a glaring error by Bechtel, the company failed to include the Boston Fleet Center in its designs, an error that cost taxpayers $991,000 to correct. Instead of paying for these mistakes, Bechtel got additional money to fix them.

The Globe also discovered that despite all the extra money and time spent on the Big Dig, in the end, there were some 3,600 leaks in the tunnels that had to be repaired at a cost of $7.3 million in 2005 alone. On September 15, 2004, one of those leaks burst open, and 300 gallons of water per minute gushed into the tunnel for hours. Although Bechtel will pay for some of the repair of these leaks, Massachusetts taxpayers will inevitably pay as well.

In March 2004, Massachusetts finally sued Bechtel and its partner, Parsons Brinckerhoff for $146 million. Why did it take state politicians so long to hold Bechtel accountable for its mismanagement of the Big Dig? One possibility is the volume of Bechtel money, in the form of campaign contributions, that flowed into the coffers of the Massachusetts politicians who should have been overseeing the Big Dig. According to The Boston Globe, Bechtel, its subcontractors, and lobbyists made at least $225,000 in campaign contributions to Massachusetts politicians between 1991 and 2003. Massachusetts’ former Governor, William Weld, received nearly $25,000 from executives of Bechtel and Parsons between 1991 and 1996. Weld’s chief fundraiser, Peter Berlandi worked simultaneously for the governor and for Bechtel as its “liaison” with the Weld administration. And Attorney General Clint Reilly, prior to taking over the job of cost-recovery on the Big Dig, received $35,000 in donations from lobbyists, lawyers, and executives connected to the Big Dig. Public outcry eventually prompted him to return the money.

Bechtel continues to use its friends in high places to elbow to the front of the line on transportation and energy projects.  As reconstruction contracts are being passed out in the wake of a season of hurricane disasters, Bechtel and allied corporations are taking their places as the key engineers of the “new” New Orleans. Already, corporations with close ties to the Bush administration, including Bechtel, have been awarded no-bid rebuilding contracts.

Andrea Buffa is the communications director of Global Exchange, a San Francisco-based human rights group.  She is a co-author of the report Bechtel: Profiting from Destruction—Why the Corporate Invasion of Iraq Must be Stopped, published by CorpWatch, Global Exchange, and Public Citizen.