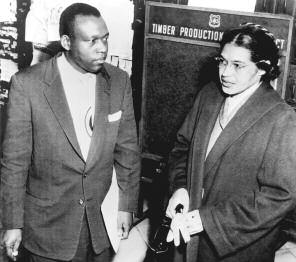 On December 1, 2005 freedom-loving people throughout the country will celebrate an act of political resistance. On that day, fifty years ago in Montgomery, Alabama, an African American department store seamstress and civil rights activist refused to follow the bus driver’s order to let a white passenger take her seat. She did not move from her place on the Cleveland Avenue bus until the police came to arrest her. In an interview during the boycott, she said, “I had been pushed as far I could stand to be pushed.”

Rosa Parks’ heroic act sparked the Montgomery Bus Boycott and helped launch the Civil Rights Movement. When the National Association for the Advancement of Colored People (NAACP) called a meeting at the Holt Baptist Church, Montgomery’s African American community filled the hall to overflowing. A young preacher, Reverend Martin Luther King Jr., urged the crowd to boycott Montgomery’s buses to protest the arrest and to fight against the racist practices of the bus company. An aroused community came together to form the Montgomery Improvement Association (MIA).

The boycott began on the cold, cloudy morning of December 5, 1955. African Americans walked to work, to school, to church, to meetings. No one rode the buses. A few with cars, arranged rides for friends and strangers, coordinating carpools through the MIA. Black taxi drivers cut prices to ten cents a ride, the equivalent of a bus fare.

As the weeks wore on, the white establishment— aghast at the economic clout of the missing black passengers—fought back with harassment and threats. Carpool drivers and people waiting for rides were arrested for loitering. Black cab drivers were threatened with fines.

When the arrests and insults could not break the boycott, white supremacists switched to terror and violence. African American pedestrians were physically assaulted and pelted with racist insults and threats. On January 30, 1956, Dr. King’s home was firebombed.

For more than a year, the African American community of Montgomery walked. Their footsteps resonated throughout the country, all the way to the United States Supreme Court. On November 13, 1956 the high court ruled that Alabama’s segregation laws were illegal. A month later, federal injunctions forced the city and the bus company to comply with the Supreme Court ruling.

Rosa Parks’ courageous step ignited a movement that successfully challenged legal segregation in public transportation, in schools, at lunch counters, public restrooms, and swimming pools. How tragic, that the heroism of Rosa Parks is being celebrated at a time when stark inequality based on race has again been laid bare in this country.

Just a few months shy of the 50th anniversary of the Montgomery Bus Boycott, as forecasters warned of Hurricane Katrina’s deadly approach, tens of thousands of African American residents of New Orleans—many of whom lacked vehicles to ride to safety—were abandoned by our government. Officials were aware that an estimated 134,000 residents of New Orleans—including 35 percent of the black population and 59 percent of poor black households—did not have transportation and would not be able to evacuate when Katrina struck. Yet, our government did nothing to provide emergency transportation. After the hurricane, many waited days for assistance to arrive. Survivors were corralled into the Superdome and the convention center and even pushed off a freeway bridge back into New Orleans by Sheriff’s deputies from a neighboring white parish. The desperate images of stranded families with lethal waters roiling around them shocked and dismayed us with the same intensity as images of the police dogs and fire hoses assaulting black protestors during the Civil Rights Movement.

The lack of transportation for the poorest victims of Hurricane Katrina is a stark reminder of this nation’s racist inequity. Over one-third of New Orleans’ African Americans do not own a car. In cities across the nation, African Americans and Latinos comprise over 54 percent of transit users. Nationally, African Americans are almost six times as likely as whites to use public transit. Not surprisingly, public transportation receives a fraction of the government funding spent on highways and roads. And this difference in funding is systematic, class-based, and race-based.

Fifty years after the Montgomery Bus Boycott, the Alabama Department of Transportation, with a transportation budget of $1.3 billion, provides no public transit funding. Bus service in Montgomery has been cut by 70 per cent; fares have doubled and student and senior discounts have been eliminated. In Alabama and 23 other states, it has actually been made illegal to use state gas taxes for transit. Cities across the country have slashed the transit systems that serve minority neighborhoods.

Bay Area Lawsuit
In the Bay Area, a federal civil rights lawsuit is pending in the U.S. District Court in San Francisco, charging the Bay Area’s Metropolitan Transportation Commission (MTC) with supporting a “separate and unequal transit system” that discriminates against poor transit riders of color.

The lawsuit, filed on behalf of African American and Latino AC Transit riders, states that public monies are spent to expand a “state-of-the-art rail system”—BART and Caltrain—for predominantly white, relatively affluent communities, at the expense of a shrinking bus system, AC Transit, for lowincome people of color. [See article on page 20.]

Oakland resident Sylvia Darensburg is the lead plaintiff in the case. Like many AC Transit riders, Darensburg depends completely on the bus service for all her family’s transportation needs. Like Rosa Parks, she has been pushed too far and she is ready to fight back—by challenging discrimination with the support of community organizations, civil rights advocates, and public interest lawyers.

“Fifty years after Rosa Parks sparked the Montgomery Bus Boycott, poor people of color are still fighting for a seat on the bus,” says Darensburg.

In Montgomery, Cleveland Avenue has been renamed Rosa Parks Avenue. But as the drama of death, destruction, and discrimination in the wake of Hurricane Katrina made visible to all—there must be many more changes before we can fulfill Rosa Parks’ legacy.

Eva Paterson is the president of the Equal Justice Society a civil rights organization based in San Francisco, California.