All Transit Is Not Created Equal 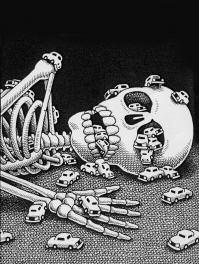 In the real world, all transit is not created equal. In general, most transit systems tend to take their low-income “captive riders” for granted and concentrate their fare and service policies on attracting middle-class and affluent riders.[3] Hence, transit subsidies disproportionately favor suburban transit and expensive new commuter bus and rail lines that serve wealthier “discretionary riders.”

What We Pay
On average, Americans spend 19 cents out of every dollar earned on transportation—an expense second only to housing. Transportation costs range from 17.1 percent in the Northeast to 20.8 percent in the South, and eat up more than 40 percent of the takehome pay of the nation’s poorest. This is an especially significant statistic for African American households, which typically earn 35 percent less than the average white household.[4]

How We Get Around
The private automobile is still the most dominant mode of transportation for every segment of the American population and provides enormous employment access advantages to its owner. Automobile ownership is almost universal in the United States with 91.7 percent of households owning at least one vehicle. According to the 2001 National Household Travel Survey (NHTS) released in 2003, 87.6 percent of white people, 83.1 percent of Asians and Hispanics, and 78.9 percent of African Americans rely on the private car to get around.[5] Clearly then, a lack of car ownership—especially among low-income people of color— combined with an inadequate public transit service in many central cities and metropolitan regions only serve to exacerbate social, economic, and racial isolation.

How Race Defines Space
In 2000, population in the U.S. was 69 percent European American, 12 percent African American, 12.5 percent Hispanic, and 3.6 percent Asian American. In the nation's 100 largest cities, people of color comprise nearly half of the population.

Three-fifths of all Blacks live in ten states—New York, California, Texas, Florida, Georgia, Illinois, North Carolina, Maryland, Michigan, and Louisiana—and nearly 55 percent of them live in the South. The Northeast and Midwest each had 19 percent of the Black population in 2000, and the West had about 10 percent. Over 88 percent of Blacks live in metropolitan areas and 53.1 percent live inside central cities.

For the nation’s 36.4 million African Americans,[7] race clearly underlies and intersects with other factors in explaining the socio-spatial layout of most of our cities, suburbs, and metropolitan regions, and a host of other quality-of-life indicators, such as the location of job centers, housing patterns and land use, the quality of air, transportation, and schools, streets and highway configuration, commercial and business development, and access to health care.

In recent years, many jobs have shifted to the suburbs and communities where public transportation is inadequate or nonexistent. The exodus of lowskilled jobs to the suburbs disproportionately affects central city residents, particularly people of color, who often face a more limited choice of housing location and transportation in growing areas. Between 1990 and 1997, jobs on the fringe of metropolitan areas grew by 19 percent versus four percent in core areas.

The suburban share of the metropolitan office space is 69.5 percent in Detroit, 65.8 percent in Atlanta, 57.7, percent in Washington DC, 57.4 percent in Miami, and 55.2 percent in Philadelphia. Getting to these suburban jobs without a car is next to impossible. It is no accident that Detroit leads in suburban “office sprawl.” Detroit is also the most segregated big city in the United States and the only major metropolitan area without a regional transit system. Only about 2.4 percent of metropolitan Detroiters use transit to get to work.

The Worst Polluters of All
Transportation-related sources account for over 30 percent of the primary smog-forming pollutants emitted and 28 percent of the fine particulates. Vehicle emissions are the main reason why 121 Air Quality Districts in the U.S. are in noncompliance with the 1970 Clean Air Act's National Ambient Air Quality Standards. Over 140 million Americans, 25 percent of them children, live, work, and play in areas where air quality does not meet national standards.[8] Emissions from cars, trucks, and buses cause 25 to 51 percent of the air pollution in the nation's non-attainment areas. Transportation related emissions also generate more than a quarter of the greenhouse gases.[9]

Improvements in transportation investments and air quality are of special significance to low-income persons and people of color who are more likely to live in areas with reduced air quality. National Argonne Laboratory researchers discovered that 57 percent of whites, 65 percent of African Americans, and 80 percent of Latinos lived in the 437 counties that failed to meet at least one of the EPA ambient air quality standards.[10] A 2000 study from the American Lung Association shows that children of color are disproportionately represented in areas with high ozone levels.[11] Additionally, 61.3 percent of Black children, 69.2 percent of Hispanic children, and 67.7 percent of Asian American children live in areas that exceed the 0.08 parts per million ozone standard, while only 50.8 percent of white children live in such areas.

Air pollution claims 70,000 lives a year, nearly twice the number killed in traffic accidents.[14] A 2001 Center for Disease Control report, “Creating a Healthy Environment: The Impact of the Built Environment on Health,” points a finger at transportation and sprawl as major health threats.[15] Although it is difficult to put a single price tag on the cost of air pollution, estimates range from $10 billion to $200 billion a year.[16] Asthma is the number one reason for childhood emergency room visits in most major cities in the country. The hospitalization rate for African Americans is three to four times the rate for whites and they are three times more likely than whites to die from asthma.[17] Moreover, Blacks and Hispanics now comprise 52.6 percent of the 43 million Americans without health insurance. Nearly one-half of working-age Hispanics (46 percent) lacked health insurance for all or part of the year prior to the survey, as did one-third of African Americans (30 percent). In comparison, one-fifth of whites and Asian Americans (21 and 20 percent, respectively) in the 18 to 64 age group lacked coverage for all or part of the year.[18]

Energy Security or ‘War for Oil’?
Today, transportation accounts for about half of the world oil demand, and road vehicles are responsible for over 70 percent of transportation energy consumption. In addition to the health and environmental reasons for moving beyond oil to more secure and sustainable alternative fuels, there are compelling energy security and economic strength reasons to invest in clean fuels technology.

The United States accounts for almost one-third of the world’s vehicles, with over 217 million cars, buses, and trucks that consume 67 percent of the nation’s oil. Transportation-related oil consumption in the U.S. has risen 43 percent since 1975. With just five percent of the world’s population, Americans consume more than 25 percent of the oil produced worldwide.[19] More importantly, with almost 60 percent of our oil coming from foreign sources, ‘war for oil’ looms as a constant scenario, with the burdens of war falling heaviest on the poor, the working class, and the people of color who make up a disproportionately large share of the all-volunteer military. (Although African Americans represent only 13 percent of the U.S. population, they make up 20 percent of the war dead in the current conflict with Iraq.)[20]

Seeking an End to Transportation Racism
Discrimination still places an extra “tax” on poor people and people of color who need safe, affordable, and accessible transportation. Many of the nation’s transportation-related disparities have accumulated over a century, and it will likely take years, great effort, and plenty of resources to dismantle the deeply ingrained legacy of transportation racism.

The effort has begun with grassroots leaders from New York City to Los Angeles demanding an end to transportation racism. They are spreading the word that transportation dollars are aiding and abetting the flight of people, jobs, and development to the suburban fringe. They are fighting for affordable fares, representation on transportation boards and commissions, and their fair share of transit services, bus shelters, handicapped accessible vehicles, and other transit-related amenities. Some groups are waging grassroots campaigns to get “dirty diesel” buses and bus depots out of their neighborhoods. Others are struggling to get public transit systems linked to job and economic activity centers, and to get workers a livable wage so that they, too, can have transportation options.

Download or view a pdf of this article (203KB).

END_OF_DOCUMENT_TOKEN_TO_BE_REPLACED
The Earth Is the Only One Telling the Truth