The New Face of Agriculture 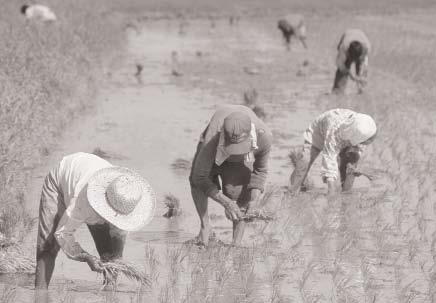 For thousands of years, small family farmers across the globe have grown food for their local communities, planting diverse crops in healthy soil, recycling organic matter, following nature’s rainfall patterns, and maintaining our rich biodiversity. Today, this agricultural system—which was built on knowledge accumulated and passed on from one farming generation to the next—faces both an environmental and moral crisis.

America is no different. U.S. farmers have been sold out to corporate agribusiness. Ever-increasing numbers of farm bankruptcies and foreclosures reap a grim harvest of alcoholism, suicides, and loss of community. In the 1930s, 25 percent of the U.S. population lived on the nation’s 6 million farms; today 2 million farms are home to less than 2 percent of the population. Small family farms have been substituted by large commercial farms, and 8 percent of farms now account for 72 percent of sales. Between 1994 and 1996, about 25 percent of all U.S. hog farmers, 10 percent of all grain farmers, and 10 percent of dairy farmers went out of business.

Federal agricultural policies have contributed to the decline of the American countryside. Recent farm bills, like the 2002 farm bill, ensure that crop subsidies don’t go to the mythic American family farmer but to wealthy corporations like MeadWestvaco, Chevron, John Hancock insurance company, and rich individuals like Ted Turner and David Rockefeller. Such policies, while subsidizing agribusiness interests, leave family farms with nothing but a tax bill.

Corporate agribusiness also robs the world’s poor. Wielding the power of the World Bank, the International Monetary Fund and international trade agreements, the United States has opened up foreign markets for its agribusiness corporations, forcing poor countries to remove subsidies and lower tariffs. United States exports corn at prices 20 percent below the cost of production, and wheat at 46 percent below cost. The result is a reverse Robin Hood effect: U.S. farm subsidies cost poor countries about $50 billion a year in lost agricultural exports, while profits for agribusinesses like Archer Daniels Midland have nearly tripled since the passage of the North American Free Trade Agreement (NAFTA).

Farmers Fight Back
But any system built on structural inequities is ultimately unsustainable because it fuels conflict and struggle along the lines of class, gender and ethnicity.

Last year, Mexican farm leaders, under a united front that proclaimed, “The Countryside Can’t Take it Any More,” started a hunger strike to protest the agriculture chapters of NAFTA. Mexico was once self-sufficient in basic grains, but largely as result of NAFTA, now imports 95 percent of its soy, 58 percent of its rice, 49 percent of its wheat, and 40 percent of its meat. An estimated 600 peasant farmers are forced off their land each day because they are unable to compete with the cheap agricultural commodities dumped in their country by the United States. The hunger strike—accompanied by demonstrations along the U.S.-Mexico border, on highways, at airports, and at the offices of transnational agribusiness corporations—saw an outpouring of support, both nationally and internationally.

This cross-border organizing is an example of the new face of agriculture. It was also evident at the Fifth Ministerial of the World Trade Organization in CancÃºn, September 2004. Lee Kyung Hae, leader of the Korean Federation of Advanced Farmers Association, climbed the barricades that were blocking over 15,000 protesting farmers, Indigenous people, and youth from the trade talks. Wearing a sandwich board that read, “The WTO Kills Farmers,” Lee Kyung Hae took his life with a knife to the heart. Lee, whose own farm had foreclosed four years earlier, had watched hundreds of his comrades driven off their lands over the years. His suicide symbolized the sacrifice of the global countryside.

But this new face of agriculture is not without hope. Farmers around the world, the stewards of our land and keepers of nature’s inheritance, have not quit. Their resilience is testimony to a growing global resistance to corporate-controlled food:

Each of these examples is more than a model of an alternative food system. They are case studies of real change taking place on the ground—slowly, organically, steadily. They signify a new consciousness that acknowledges that food is both personal and political. This new face of agriculture is the pathway to a new future that embraces a life-affirming and just food system. What is the battle cry of this movement?  Food sovereignty is a fundamental human right.


Anuradha Mittal, a native of India, is an internationally renowned expert on trade, development, human rights and agriculture issues. She is the founder and director of a new policy think tank, The Oakland Institute. Previously, she spent nearly a decade at Food First/ Institute for Food and Development Policy and was its co-director. She lives in Oakland (amittal@oaklandinstitute.org).