When most people think of families without water, they picture people in impoverished countries in Africa or Latin America. But right here in the United States, dozens of communities are struggling for access to clean, affordable water. In 2001, the city of Detroit introduced an aggressive debt collection plan that threatened to suspend water services if residents could not pay the quarterly charges. Within a year after the plan was introduced, more than 40,000 residents of Detroit had their water cut off. Today, many of these families—mostly low-income and black—are still without water, relying on the kindness of neighbors willing to share their hoses. 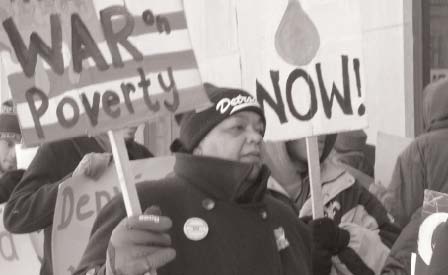 Also in 2001, the city council in Laredo, Texas, hired a private water company to run their water system. United Water, a subsidiary of the French multinational corporation, Suez, promised the city that under the five-year contract, the company would save money, expand services and improve efficiency.  But their services have not been extended to the informal settlements on the edge of town—known as colonias—where Rosalia Guerrero works with a community development agency called Centro AztlÃ¡n. “There is no running water or paved road in these communities,” says Guerrero. “The nearest spigot is seven to ten miles away. The county has been promising us water for over ten years, but the end of the year always comes and there’s no water.”   In response, Guerrero and her neighbors organized a water cooperative that delivers 300 gallons of water trucked in from prepaid meters to 125 families each week. That’s approximately the same amount of water the average American family uses every day.

The struggle for clean and accessible water in these communities illustrates the growing economic value of water in today’s economy. Sometimes referred to as “blue gold,” water will likely define the next century in many of the same ways that oil, and the conflicts over it, have defined recent times.  Corporations, teamed up with pro-privatization government officials, are already making plans to bottle, export, deplete, pollute and otherwise consolidate control over this essential resource.

In contrast, the environmental justice movement has been working for decades to ensure that local and state governments provide universal access to clean, affordable water while also addressing historic inequities in service, water quality and access that often afflict poor communities. Now many of these communities are faced with the threat of privatization, making the struggle for accountability and affordability even more difficult.

Global Water Barons
Historically, cities created municipal water and sewage utilities to prevent the spread of communicable diseases such as cholera. After more than a century of massive public investment, approximately 85 percent of the people in the United States receive their water from a publicly owned water utility. However, as old water infrastructure crumbles and the federal government cuts funding, cash-strapped local governments are turning to private companies to remedy their water problems.

Private companies often promise to increase access and improve service to impoverished communities. But the real-life experience of privatization is often disastrous for consumers and adds new hurdles for low-income families. According to research conducted by Public Citizen and other public interest organizations, privatization often leads to a weakening of democratic institutions and increased corruption; layoffs of public sector jobs; higher rates and cutoffs; and lower water quality standards.

Municipalities that hoped to save money are finding that privatization can be a costly experiment that drains money out of the community and can leave cities heavily in debt. Suez’s first major contract in the United States was recently terminated by the city of Atlanta after the company fired half the workers, created a backlog of service and debt collection problems, and billed the city for work it didn’t perform. In 2002, Suez delivered brown water to residents, forcing the state Environmental Protection Agency to issue boiled-water alerts. Atlanta officials estimate that the cost of transitioning the water system back to public control will top $10 million.

The Price of Privatization
A number of cities, including New Orleans, Detroit, Indianapolis, and Stockton and Richmond, California, have also contracted the management of their water and/or sewage utilities to private corporations; many more cities are flirting with the idea. However, municipal governments should not be duped into thinking the only way to save money is through privatization, because private companies incur a number of costs that cities don’t, including shareholder dividends, high executive pay and corporate taxes.

Furthermore, corporations that exist to make a profit are less likely to consider the needs of low-income communities. In Detroit, the “debt collection” program was the idea of Victor Mercado, the new director of the Detroit Water and Sewerage Department (DWSD). Mercado, who worked for two private water companies (British-based Thames Water, and United Water) before heading up DWSD, has a hard-line, pro-business approach. He runs the DWSD like a profit-making corporation, cutting costs by eliminating services to the poor, and even going so far as to cement areas around the valves to prevent desperate residents from turning the water back on. In 2003, Detroit water rates rose 9 percent and they are scheduled to increase 16.9 percent this year. Some residents suspect that after years of starving city services, Mercado is setting up Detroit for privatization.

“When you have 40,752 people with no water and over 100,000 with no health care, you have a human rights crisis of epic proportions,” said Maureen Taylor, director of the Michigan Welfare Rights Organization, a group that is mobilizing against privatization. “But because it is affecting low-income and poor people, most folks can simply choose to ignore it.”

Ironically, in November 2002, the same month that DWSD decided to cement shut the water valves, the United Nations Committee on Economic, Social and Cultural Rights adopted a new amendment on water, stating that: "The human right to drinking water is fundamental for life and health. Sufficient and safe drinking water is a precondition for the realization of all human rights." The debt collection policies of DWSD defied even United Nations’ standards.

If the threat of privatization to low-income communities of color is to be stopped, people of color in particular need to be included in water governance decisions. A recent study of water issues facing Latinos in California found “a chronic and pervasive lack of representation of Latinos and other people of color at every level of water policy planning and decision making.” The report, written by Paola Ramos of the Latino Issues Forum, concluded that “[i]t is important for the regional water quality control boards, local water agencies and other bodies to be representative of the populations they serve, in order to understand constituents’ needs and be better prepared to respond to their concerns.”

To fight privatization, grassroots water justice activists are also reaching out across borders to learn from communities in the global South that have been battling privatization for years. Participants in the People’s World Water Forum, held in January 2004, called for solidarity in the fight against privatization by Suez and Coca-Cola’s bottled water operations (see www.wateractivist.org for more information).

In the United States, Public Citizen, Michigan Welfare Rights Organization, Centro AztlÃ¡n, the Alliance for Democracy, the Indigenous Environmental Network, and other organizations committed to environmental justice have created the Water Allies Network. To find out about their activities, help build a movement to safeguard our water heritage, and spawn a new legacy of responsible, ecologically and socially sustainable stewardship of our precious watersheds, go to www.waterallies.org. The network is also sponsoring many events at the Boston Social Forum (July 23-25), a regional forum within the World Social Forum process and a first in North America. Join with them in repeating the call, “Water for Life, Not for Profit!”

Juliette Beck is the California coordinator of Public Citizen’s Water for All campaign, based in Oakland (www.wateractivist.org).

Maude Barlow and Tony Clarke, Blue Gold: the Fight to Stop the Theft of the World’s Water, April, 2003.

Maude Barlow, Blue Gold: The Global Water Crisis and the Commodification of the World’s Water Supply, a special report issued by the International Forum on Globalization, Spring 2001.