“Imperialism and colonialism are not something that happened decades ago or generations ago, but they are still happening now with the exploitation of people....The kind of thing that took place long ago in which people were dispossessed from their land and forced out of subsistence economies and into market economies—those processes are still happening today." —John Mohawk, Seneca, 1992

Ever since Pope Alexander VI’s 1493 Papal Bull “Inter Caetera” called for the subjugation of America’s “barbarous nations” and Indigenous lands, first colonial and then successor empires have forcibly and violently oppressed Indigenous peoples—as a “race” of people. But the religious imperatives of conversion and annihilation have only been replaced by contemporary forms of oppression: assimilation, development schemes, privatization of land and water, and now economic globalization. The nation-state economic elites and transnational corporations have replaced the earlier conquistadors and colonists as the beneficiaries of stolen Indigenous lands, knowledge and resources.

Loss of Land, Sovereignty
Through a number of treaties and agreements with the U.S. government in the 18th and 19th centuries, Indigenous tribes relinquished control of territory and agreed to retain much smaller tracts of land. In return, the government promised protection, education, health care and other forms of compensation. The government made many promises, including one major agreement that became known as the “U.S. trust responsibility.” Under this framework, Indigenous lands or reservations were to be held in “trust” for the tribes and protected by the United States. As trust territories, tribal lands are recognized as separate from U.S. domestic lands.

However, during the 1950s the U.S. Congress actively sought to end that special relationship with Indigenous tribes. A massive relocation project seduced many tribal members to move from their economically depressed reservations into cities with the promise of jobs and opportunity. Once in the city, tribal members found themselves without the promised prosperity or the security of tribal life. Some returned home but many stayed in the cities and became known as “urban Indians.” Today, near 55 percent of the total U.S. Indigenous population resides off reservation, with a high percentage living within low-income areas of the cities.

The U.S. “Termination Era” policy of the mid-1940s to mid-1960s presented Indigenous peoples with another challenge to their survival. The policy was meant to assimilate tribes into the mainstream society irrespective of their history, culture and unique political relations with the United States. Some tribes, such as the Menominee in Wisconsin and the Klamath in Oregon, were offered money if they agreed to sell their lands and terminate their treaties and agreements with the government. By selling lands, Indigenous tribal nations gave up the protections insured by the treaties. The tribes would also no longer be sovereign entities. Some tribes did choose to sell their territory, with catastrophic consequences to their peoples. Termination, however, was a failed policy. In 1970, President Nixon heralded the beginning of a new era in which Indian self-determination, without termination, would be the guiding principle for government policy regarding Indians.

Environmental and Economic Exploitation
Shortly after Indigenous reservations were formed, abundant natural resources were found to exist upon these lands: timber, minerals, petroleum, fur bearing habitat, fish and water. Following the treaty-making era, the U.S. government sought to gain direct access and control over the remaining Indigenous natural resources. Oklahoma, where many Indigenous tribes were sent through forced relocation, was abundant in oil. The Black Hills in South Dakota, sacred to the Lakota nation, had gold. Coal reserves were discovered in the homelands of the Dine’ (Navajo) and Hopi nations in Arizona, and the Crow nation in Montana. The last frontier within the United States was Alaska, where the government and its timber and petroleum corporate partners negotiated one of the biggest land grabs in modern history. 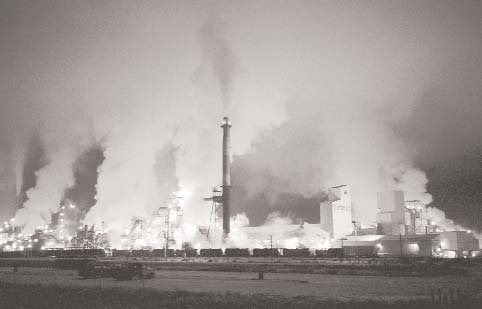 With rare exceptions, these developments have not directly benefited Indigenous peoples. Indeed, Western forms of production and business development have forced Indigenous peoples to depend on the U.S. cash economy and to implement Indigenous-based capitalist initiatives while their traditional economies collapsed. Territories where Indigenous peoples live are resource-rich and serve as the base from which governments and corporations extract wealth; yet they are also areas where the most severe form of poverty exists.

Current Crises and Pressures
The ecosystems of Mother Earth are in crisis. We are experiencing an accelerating spiral of climate change and global warming. Caused by the excessive buildup of heat-trapping greenhouse gases in the Earth’s atmosphere—in particular carbon dioxide emissions from the burning of oil, gas and coal—climate change threatens virtually every segment of the biosphere and human society.

Yet climate change doesn’t affect everyone equally. Indigenous peoples, from the Arctic and worldwide, and others who rely on the land and water for food and culture are most threatened by these weather changes. Indigenous peoples, people of color and ethnic groups, small island countries, women, youth, coastal peoples, fisher peoples, poor people, the elderly and the ecosystem are suffering the impacts of the fossil fuel economy at every stage of its life cycle—from exploration, production, refining and distribution, to consumption and disposal of waste. If consumption of fossil fuels, deforestation and other ecological devastation continues at current rates, it is certain that climate change will result in increased temperatures; sea level rise; changes in agricultural patterns; increased frequency and magnitude of “natural” disasters such as floods, droughts and intense storms; epidemics; and loss of biodiversity.

Mainstream society’s lack of environmental concern disrupts the ability of Indigenous peoples to protect their traditional territories. Indigenous communities are finding it difficult to maintain sustainable economic systems, to practice their traditional ceremonies, and to preserve their hunting, gathering and fishing cultures. Indigenous spiritual and cultural practices depend upon access to their traditional lands, including historically and spiritually significant sites. Some Indigenous tribal cultures derive their family clan or kinship identification from particular plants, habitat, fish and food groups. Yet mineral and mining extractions, flooding of lands from mega-hydro dams, and toxic chemical contamination of traditional food systems seriously affect their deeply ingrained spiritual and cultural relationship with the ecosystem.

In the eyes of many Indigenous spiritual leaders, the source of these pressures can be traced to the long historical processes by which humans have become increasingly alienated from the Mother Earth. This results in an alienation from self, community and nature. The alienation has roots in imperialism and colonialism, and is currently being exacerbated by economic globalization, initiatives of free trade, privatization and development policies that have no tie to nature. These trends propel an unsustainable concept of the natural world as “property,” and therefore a commodity to be exploited freely, and bought and sold at will. This paradigm has resulted in disharmony between human beings and the natural world, as well as the current environmental crisis threatening all life. It is totally incompatible with a traditional Indigenous worldview.

Indigenous People Take Action
Indigenous peoples from the United States and throughout the world are expressing their concern about the agenda of economic globalization and imperialism. Indigenous tribes’ inherent rights to sovereignty and self-determination are undermined by the World Trade Organization (WTO) and by most free trade agreements. Whether through environmental degradation; biopiracy and the patenting of Indigenous medicinal plant and seed knowledge; or the militarization and violence that often accompanies development projects, the impact of these agreements is disproportionate and devastating to our communities.

The Indigenous Environmental Network and other U.S.-based Indigenous non-governmental organizations are challenging the WTO by applying Indigenous rights- and human rights-based approaches that redefine principles and practices in regards to trade and development. We envision a “sustainable communities” paradigm, a transparent and democratic process, as well as alternative worldviews and models of development. The Kimberly Declaration and the Indigenous Plan of Implementation, developed at the Indigenous Peoples’ International Summit and the World Summit on Sustainable Development, affirmed the vital role Indigenous people play in defining this new paradigm.

Indigenous peoples of the United States and the world—especially, those that still maintain and practice their land-based cultures—are a threatened people. But Indigenous peoples are fighting for all life put in jeopardy by corporate globalization and its agenda for world domination and control. Indigenous peoples from the United States and global community believe that they can offer viable alternatives to the dominant export-oriented economic growth and development model. Indigenous peoples sustainable lifestyles and cultures, traditional knowledge, cosmologies, spirituality, values of collectivity, reciprocity, respect and reverence for Mother Earth are all crucial in the search for a transformed society where justice, equity and sustainability will prevail.

Tom B.K. Goldtooth (Mato Awayankapi) is director of the Indigenous Environmental Network in Bemidji, Minnesota. He was an Indigenous delegate at the third World Water Forum in Kyoto, Japan in 2003, at the fifth Ministerial meeting of the WTO in Cancun, Mexico 2003, and at the fourth World Social Forum in Mumbai, India 2004. He is active on many other environmental and social justice organizations, such as Honor The Earth Campaign and Just Transition Alliance.

From the Ground Up: Environmental Racism and the Rise of the Environmental Justice Movement, Luke W. Cole and Sheila R. Foster, 2001.

The Corporate Planet: Ecology and Politics in the Age of Globalization, Joshua Karliner, 1997.

The Way It Is, Spiritual Leader Corbin Harney, 1995.

END_OF_DOCUMENT_TOKEN_TO_BE_REPLACED
The Earth Is the Only One Telling the Truth