Removing the Poor through Land Use and Planning

In Texas, when they talked about “smart growth,” they said it would limit suburban sprawl but it was just gentrification. Sprawl hasn’t stopped. As they began to develop downtown, they pretended that there were no people of color downtown. Those people who were supposed to be our allies are running us out of our communities.

The passage of the Standard State Zoning Enabling Act of 1922, under the sponsorship of the United States Department of Commerce, gave authority for cities to regulate land use. Cities used the Act as a zoning tool to exclude or segregate the poor and people of color from certain areas. In many cities throughout the United States, people of color live on the other side of the railroad tracks and/or major highways. In 1928, the City of Austin’s Master Plan designated East Austin as the area where all industries, African Americans, and Mexican American communities would relocate and reside. Prior to that, there were African American and Mexican American communities throughout Austin. 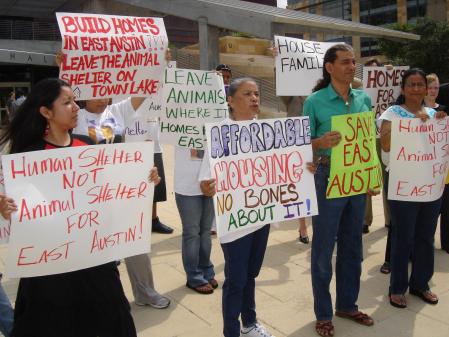 Although Austin has an image of a progressive city, poor race relations and poor land use planning are at the heart of many issues. For instance, Austin is the only metropolitan city that has at-large elections for city council members. That is to say, we do not have districts, wards, or smaller units of representation on the city council where zoning cases and codes are finalized and formalized. In the 1960s there was a “gentlemen’s agreement” that designated one city council seat for an African American and one for a Mexican American, and whites usually decide who will be elected.

At the same time that people of color began to cleanup their communities, another national movement began to develop: Smart Growth. As we rid our communities of industrial and certain types of commercial zoning, which had allowed hazardous facilities, pawn shops, and liquor stores in our neighborhoods, the Smart Growth movement was inventing new zoning categories. Just to name a few, the new zoning included Commercial Mixed-Use, Vertical Mixed-Use, Mixed-Use Urban Center, and Neighborhood Mixed-Use. None of these zonings secured housing for the poor or the working poor.

The Smart Growth movement began to move toward high density development in the urban core of numerous cities in an attempt to curb urban sprawl. The Smart Growth movement was advocated by mostly white middle class people who felt that sprawl needed to be addressed and that high density development in the urban core was the answer. People of color, the poor, and the working poor were not at the table and thus, the impacts on these communities did not receive meaningful consideration. Urban planners and developers began developing the urban core as if people of color were not living in them. New zoning codes and policies were adopted to make room for the new urbanisism. Communities of color throughout the United States began to see condos, lofts, McMansions, and live/work buildings pop up in low-income and people of color neighborhoods. A tidal wave of gentrification began to engulf people of color communities.

Environmental Issues Are Economic Justice Issues
PODER was formed in the early 90s by a group of Chicana/o East Austin activists and community leaders to increase residents’ participation in corporate and governmental decisions related to economic development, environmental hazards, and the impact on our neighborhoods. Our mission is redefining environmental issues as social and economic justice issues, and collectively setting our own agenda to address these concerns as basic human rights. We seek to empower our communities through education, advocacy, and action. To promote community empowerment, PODER has undertaken projects to educate the community so they may advocate for themselves and take the appropriate actions to become participants in decisions that ultimately affect their quality of life.

In the early 2000s, PODER produced a brown paper discussion that forced the City of Austin to put together a gentrification task force. PODER’s report included recommendations, such as a Community Land Trust where land is purchased and set aside for communities to decide the use—from parks to housing to small business development. In 2006, the City of Austin put a small amount of money in a Community Land Trust but so far, no land has been bought or put aside. PODER also recommended inclusionary zoning and housing/rent control. The Texas State Legislature passed a law prohibiting statewide inclusionary zoning in 2004. In 2005, State Representative Eddie Rodriguez passed House Bill 525—the Homestead Preservation Act. This law gives the City of Austin several unique tools that preserve housing affordability in Central East Austin, such as inclusionary zoning. The law is in place but no action has been taken by the City of Austin. The city refuses to hire a lobbyist to push for rent control at the state legislature. Another one of PODER’s recommendations was that community neighborhood plans be supported and their economic, social, and environmental visions implemented. The City of Austin did divide the city into 52 neighborhood planning districts but it continues to override the visions of low-income people of color.

PODER and other housing activists recommend that housing funds be truly utilized to assist the poor and working poor of this country. The present system of median family income does not capture an adequate financial reality of many communities where there is a large gap between rich and poor. Smaller units for financial determination of affordability should be instituted at the federal level. The federal government must provide adequate funds for low-income housing programs. We also feel that federal policy should be implemented to institute rent control nationwide.

Historically, communities of color, Latinos, African Americans, Asian Americans, and Native Americans have been disproportionately affected by toxic contamination. At the same time, our communities have not benefited equitably from these industries. As we look into our own backyard, we see a power plant, fuel storage tank farms, refineries, lumber companies, and most recently, high tech industries which emit their pollutants into the air we breath, the water we drink, and the earth that sustains us.

In Austin, we saw communities living adjacent to industry, families living next to the power plants. We went door to door doing health surveys and found disparities in rates of cancer, learning disabilities, and asthma in impacted communities, compared to city averages. We launched the LUCA (Land Use, Community and Action) campaign to bring to light the fact that this was more than a community issue; it was a regional issue of health disparities. We said that Health and Human Services agencies need to look at the health of our communities, focusing at the federal level.

Go National, Go Global
What do we do? Research done by grassroots communities must be recognized. We can give living testimony on what our communities are putting up with. On city, county, state, and federal levels, we can frame how housing needs are being addressed. We can take it from the local to the state level, then up to the national level, targeting the department of Housing and Urban Development, like we did with the Environmental Protection Agency.

We have to fight and address the gentrification issue. In this period of globalization, there is a need to redefine national and international goals with a broader vision, which honors the sacredness of human life and the environment. We must, therefore, work to create economic and social juistice within our own communities and support the efforts of others to do so in communities around the country and the world. Only then can we restore global environmental harmony.

Susana Almanza is the executive director and cofounder of PODER.