Primer on the legacy of participatory research partnerships

Community-based participatory research, or CBPR, is the product of several terms, including community-based research (i.e., research physically located in a community), action research, and participatory action research (PAR).[1] Each has its distinct roots, which have grown and intertwined. Today, the term CBPR is most often used in the field of public health in the context of collaborative, multi- and interdisciplinary endeavors, and partnerships (e.g., between grassroots community groups and academic institutions).

Most people describe CBPR by its characteristics or principles.[2,3] In a review of the roots of CBPR, Wallerstein and Minkler refer to two distinct historical traditions, Northern and Southern, to which the more recent concept of CBPR can be traced.[4] These approaches to research are elsewhere referred to as the Traditional and Radical forms of action research.[5]

Kurt Lewin, the social psychologist credited with coining the term “action research” in the 1940s, best represents the Northern, or Traditional, roots. Lewin was an early proponent of the use of scientific data by community leaders, hopeful that improved research facilities at universities would facilitate action research in social change endeavors. He also emphasized the importance of “intergroup relations”—i.e., the relations between researchers, those who are the subjects of their studies, and groups defined by area of expertise.

The Southern, or Radical, form of action research emanates primarily from the Southern hemisphere, or so-called Third World. The distinguishing characteristic of this tradition is an explicit challenge to the inequitable distribution of political and socioeconomic power. The Southern tradition defies unequal access to, and participation in, the production of knowledge in institutions of higher learning. Most representative of this tradition is the work of educator Paulo Freire from Brazil, Colombian sociologist Orlando Fals- Borda, and Rajesh Tandon, an engineer from India who now runs the Society for Participatory Research in Asia, out of New Delhi. Their teachings and philosophies share the conviction that social scientists have an important role in the movement for liberation of the poor from exploitation and hierarchical social structures.

If we were to distill the characteristics common to PAR and CBPR, they would include the participation of those affected by the results of research at every step of the process (i.e., defining the problem, designing the study, analyzing results), the equitable distribution of power among participants, and a solution-oriented outcome. 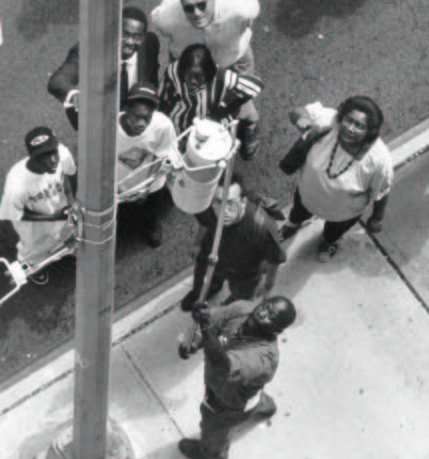 One reason these distinct traditions may have come together in the form of CBPR in the United States is the emergence of the environmental justice movement, and the recognition of institutional racism and oppressive social and political structures. Several events have contributed to this recognition, such as the documentation of such inequalities by the U.S. General Accounting Office (GAO). The GAO's 1983 report, Siting of Hazardous Waste Landfills and their Correlation with Racial and Economic Status of Surrounding Communities, was conducted at the request of a North Carolina Congressman after hundreds of his constituents in Warren County were arrested for protesting a new PCB landfill in that rural African-American community. Results of the study confirmed what residents already knew: African Americans were disproportionately burdened by hazardous waste. Three of four federally designated hazardous landfills receiving waste from the eight southern states that comprise Environmental Protection Agency’s (EPA) Region IV were located in areas where the majority of the population lived below the poverty level, and was Black (in contrast to the general population throughout the eight states).

Following the GAO report, in 1986, the Emergency Planning and Community Right-to- Know Act (part of the Superfund Reauthorization Act) made it possible for community groups and interested individuals to conduct research documenting environmental injustices. Though the Act is reliant on self-reporting by industry and does not include all toxic chemicals or exposures, it facilitates the process by which residents can access information to track their own proximity to toxic waste and conduct their own community-based participatory research via these publicly accessible databases.[6]

In 1987, a year after reauthorization of the Superfund Act, the United Church of Christ’s (UCC) Commission for Racial Justice published Toxic Waste and Race in the United States, widely viewed as conclusively documenting how communities of color had become the "dumping grounds" for our nation's waste and pollution. One of the communities highlighted as an example of such injustice was East St. Louis, Illinois. That same year, with the help of State Representative Wyvetter H. Younge, a group of ministers from East St. Louis approached the University of Illinois School of Architecture’s East St. Louis Revitalization Project. They proposed a communityuniversity partnership that would conduct community- based research. While negotiating this partnership, the residents presented five conditions in writing to the university. Among them was the requirement that residents, not faculty or funders, have both control over the research agenda and involvement in every step of the research process. That was the beginning of the East St. Louis Action Research Project, which has since served as an example of how CBPR contributes to achieving the goal of environmental justice.[7]

As the grassroots environmental justice movement increased momentum, environmental health professionals responded. In 1993, the National Institute for Environmental Health Sciences (NIEHS), one of the 28 institutes that comprise the National Institutes of Health, launched a small grant program, Environmental Justice/Partnerships for Communications, with the goal of strengthening relationships among researchers, communities and health care providers. Soon after, they launched a similarly structured program, titled Community-Based Prevention/Intervention Research. In 1994 President Clinton mandated that all federal agencies achieve environmental justice by identifying and addressing disproportionately high and adverse human health and environmental effects on minority and low-income populations.[8]

Over the next two years, “partnership,” “collaboration” and “participation” became the preferred tools to fulfill President Clinton’s mandate. The U.S. EPA, Department of Housing and Urban Development, Department of Education, and the National Centers for Disease Control and Prevention all launched programs to address environmental justice, often via community-university research partnerships. A windfall of funding for partnerships and participation also came from private foundations, although they did not share the mandate of addressing environmental justice. Local, regional and international networks were launched that represented aspects of the Southern and Northern approaches to action research. Examples include the Community-University Consortium for Regional Environmental Justice (CUCREJ), the Loka Institute’s Community Research Network (CRN), and Community-Campus Partnerships for Health (CCPH).

In 1999 the National Academy of Sciences’ Institute of Medicine (IOM) published Toward Environmental Justice: Research, Education, and Health Policy Needs.[9] In this report, several pages were devoted to the topic of “participatory research” which was espoused as a method for addressing health disparities and environmental injustice. This was an important validation of community participation in an arena where epidemiological studies, and exposure and risk assessments—which traditionally allowed little opportunity for meaningful community input— had been the basis of policy decisions that contributed to environmental injustices. By suggesting participatory research, the IOM report called to question the dominant perception that the inclusion of those most affected by study findings threatened scientific objectivity. The year following the IOM report, NIEHS convened a meeting on the topic of best practices in “community-based participatory research,” officially adopting the language of participatory research to describe their environmental justice and community-based programs.

As the number of governmental agencies embracing the language of participatory research continued to increase internationally, early proponents grew concerned that the concept was at risk of being coopted. For several decades Orlando Fals-Borda and others of the Southern tradition met at the World Congresses on Participatory Action Research. Writing after the 9th World Congress held in 2000, Fals- Borda described a “certain satisfaction” with “the progress of PAR from its early intellectual and political endeavors to its present institutionalization,” witnessed in part by the “heaps of books and magazines on the topic.” He also recognized the presence of representatives from the World Bank, and observed the, “overwhelming presence of Euro-American authors…. a striking change from the seventies, when there was a wide diffusion of the first monographs by participatory researchers and activists from Third World countries.”[10]

Fast forward to 2004. While co-optation may not be the reason behind persistent inequalities in exposures to environmental hazards, the ability to achieve the social change articulated by the civil rights and environmental justice movements has grown weaker, not stronger, in many parts of the United States and internationally. Laws have been written, but poorly enforced. And while the vocabulary of empowerment and justice is used globally, we have yet to realize equally empowered societies.

Let us remember the roots of CBPR—efforts to realize alternative forms of research and social change—so that in five, ten or 50 years from now, CBPR will not be little more than expert-driven research dressed in the day’s fashion, or even worse, a form of control and exploitation. Let’s ensure that the relationships between researchers and communities have not morphed to match the structures that have given rise to institutional racism and inequality—or that concerns for rigorous standards and legitimate methods override a vision of problem solving and social change. Instead, let’s envision a research infrastructure, including scientists, universities, and governments, with the capacity to be responsive to community concerns, engaging in genuine and empowering partnerships.