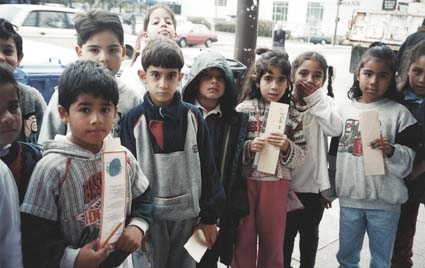 For over a decade I’ve been teaching my six-, seven-, and eight-year-old students to strike against me in the classroom. I drew the inspiration from “the Yummy Pizza company” labor unit1 and my own experience as a teacher and writer. Instead of producing pizzas, students at “Pepper Ink.” produce laminated bookmarks of the best poem they’ve written in a year-long study of the genre. This year, however, the experience took a different turn when one of our potential Pepper Ink. workers was forcibly removed from the school.

Students begin the year in my second grade two-way Spanish immersion class by comparing indigenous and first world points of view on the conquest of the Americas, go on to study Africa, women, and finally civil rights and labor heroes. They engage in internet and library research for their own books, questioning contradicting sources, and examining information critically. They sit in heterogeneous cooperative groups in which they rotate the job of teacher, who is to assist anyone needing help, if the group cannot. They can also file complaints in a box about one another’s abuse of power, including mine. From this process, my students develop a healthy sense of justice and participatory-style democracy. Students often refer to the Doug Minkler poster on our wall, which includes the slogan, “All of Us or None.”

In the initial days of Pepper Ink., students typically fill out skills preference surveys and job applications. Next, they interview for one of four positions in our bookmark factory: artist, color-er, glue-er, and inspector. Student observers coach one another on how to improve.

“I’m a good artist, only sometimes my mommy helps me and sometimes I don’t like to,” one child responded.
Hands went up immediately. “Just say you’re a good artist.”

Pepper Ink. workers are typically offered specific jobs and a contract to sign with the terms: bookmarks will be distributed to sell for $2; workers keep one dollar as pay, the other dollar is for class funds toward a party, prizes, or game. After a couple of days, I announce that Pepper Ink. has made, say, $20 towards the purchase of a classroom set of Legos, but now I want more for myself; workers will have to produce twice as much. This means no talking, no getting out of their seats. My supervisors are to issue warnings to violators of company rules and keep workers from striking. Grudgingly, students sign the new contract. Usually, a couple won’t hand it in. It then becomes wonderfully quiet on the floor as Pepper Ink. workers work diligently, silently, sullen-faced. The supervisors prance about, issuing yellow and red warnings, getting the workers increasingly annoyed with their peers’ abuse of power.

As lunch time approaches, I offer my supervisors an irresistible snack. Popcorn works well; my office microwave flooding the factory with the tantalizing aroma. Responses have ranged from outright defiance and strike threats to secret lunch meetings during which, something akin to a union is formed. With particularly well-behaved students like this year’s, I have to give workers hints, like reading Si Se Puede by Diana Cohn, about the Los Angeles Janitor’s strike, or encouraging them to engage in a tug of war with me over a jump rope in which they all have to join together to bring me down. One year, the students snuck into the classroom and made picket signs out of construction paper, masking tape, and poles made of linked markers or meter sticks. I’ve found it’s best to demote supervisors to a non-managerial position just as we go to lunch, so they will feel a sense of solidarity with workers, instead of terrorizing them into complacency, as nearly happened this year.

Once workers realize I’m powerless before their united action, they immediately overthrow all class rules. They scream until I surrender. After the class quiets down, I quickly explain that some rules exist to benefit the boss, the others, for the good of all. They ratify each rule anew, and have consistently thrown out the new contract as benefiting only their employer. This year, my second graders decided to rewrite the contract to exclude supervisors altogether, as well as specific job assignments. During the three miserable hours toiling under the contract which drove them to strike, they produced five quality bookmarks. Now, organizing their own labor, they produced twenty in the first half hour.

Deportation Hits the Classroom
This year the classroom project took a different turn since the family of one of our top “workers,” Gerardo Espinoza, was ordered deported by ICE, Immigration and Customs Enforcement. Under the law, as a United States citizen, Gerardo could have stayed behind, but for all intents and purposes, he too was deported. My last day as his teacher was on Valentine’s Day.
In the week that followed his forced removal, I saw visible signs of trauma in my students similar to the kinds of fears I had heard expressed after the September 11 tragedy. They began having nightmares and even my Anglo students expressed fear that ICE would come for them next for having been friends with Gerardo and other Latinos.

Drawing on all the lessons I’d taught them based on my decade of work with California Poets in the Schools, the students wrote moving poems in Spanish about and for Gerardo. Then, with the help of John Oliver Simon’s Poetry Inside Out program, they translated them to English for Pepper Ink.’s bookmarks. The art work they produced for these colored, laminated bookmarks surpassed anything ever produced at Pepper Ink. I, in turn, wrote a letter trying to convince a judge to allow Gerardo to stay. My letter was translated into Spanish and was published in newspapers and circulated on the internet.

Before long, the story of Gerardo’s unjust disappearance, along with his older brothers Felipe and José, hit other media, including the San Francisco Chronicle. This fostered an outcry of community support. Aided largely by Berkeley Organizing Congregations for Action and with the help of Le Conte Parent Teachers Association President Cary Sanders and the Berekely Federation of Teachers, we organized a large immigrant rights teach-in. Parents, teachers, labor activists, and city officials packed the Rosa Parks multi-purpose room. My students performed the poems they had read for Gerardo and recited quotes by Cesar Chávez and Rosa Parks.

We sold so many of their beautiful Pepper Ink. bookmarks that we raised 300 dollars for the Espinoza family. We raised yet more when two of my students joined me for a talk about Gerardo in honor of Cesar Chavez before a panel which included the Berkeley Mayor and labor leaders. I called the Espinozas with the good news. They seemed to take some solace in the fact that their tears have been the seeds germinating a reinvigorated immigrant rights movement in Berkeley.

Our teach-in and pressure from the community culminated in Berkeley’s strengthening its City of Refuge resolution, the teacher’s union approving a resolution to educate and protect immigrant school parents, and our raising over $1000 for Gerardo. Then Flavio Lacayo and Univisión came to our classroom to film a special on immigrants, which aired in July. Our collective statements on the television drove home to many the injustice of United States immigration policy.

On the last day of school, reminiscing about the year, Flynn Michael-Legg spoke up, almost in verse, to share his thoughts with the parents we had invited to join us in a farewell. “I feel powerful. Small doesn’t matter. Big doesn’t matter. Your voice matters. Birds can fly and so can I with my voice!”

Gerardo,
You are deeply wounded
like a little bird falling
into the depths of water.
You can’t breathe.
You try to reach the surface to breathe
but can’t.
Poor little bird,
when are you going to fly and make a new rainbow
for me again?
When the water has swallowed you,
there will be no songs in my heart.
Poor little bird,
Please don’t forget me.

I met him as a silver sun shining with the stars.
I knew him furiously defending his family with love.
I knew him marching and fighting with his words.
I knew him like an upside down “u” with two dots inside
I knew him escaping from the guns of la Migra.
I knew him walking in a field without flowers.
I knew him playing like an angel,
flying without love nor peace.
I knew him crying at the border
because he wanted to be with his friends.
I knew him saying, “I am a wall of shade
the corn of a sick eagle.”
I knew him rising from the dark peel
which falls from the rising moon.
I knew him riding a horse holding
the flag of Cesar Chávez
I knew him united with the Latino race
fighting for our freedom.

Download or view a pdf of this article (257KB).

END_OF_DOCUMENT_TOKEN_TO_BE_REPLACED
History of Exploitation: from Slavery to Domestic Work