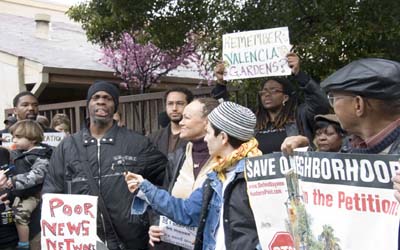 There are many things this poverty scholar can teach you—but in reality, no more or less than any of the poverty scholars you see, or more than likely don’t see, everyday. Homeless families, poor youth of color, migrant workers, panhandlers, sex workers; sitting, dwelling, camping, soliciting work, convening. I am them, they are me.

We are in a revolutionary struggle to not be lied about, incarcerated, mythologized, and misconstrued; to be truly heard and recognized for the deep scholarship we all hold; to survive while battling the looming jaws of poverty, the criminal injustice system, the police, the welfare system, and the gentrifying landlords.

But the one thing this poverty scholar must teach you is to re-think your notions of scholarship itself. Who is considered a great scholar? How is scholarship attained? How is greatness honored? And with what tools do we assess this canon?

At POOR Magazine we have a radical concept of scholarship: who deserves it, how it is attained, and how it is used. This scholarship has a new canon, with new designations for greatness. Survival itself, through extreme poverty and crisis, houselessness, racism, disability, and welfare, to name a few, are what you need to qualify for poverty scholarship.

Conversely, a person who is formally educated with a Master’s Degree and no poverty scholarship would be considered inexperienced and therefore, should not be writing, lecturing, or legislating for and about communities in poverty. The formally understood “signs” of scholarship, such as writing, researching, critiquing, publishing, require inherent privilege. These signs afford people an ability to be heard and recognized. Personal Journey.

My personal journey out of poverty, homelessness, and a life of marginalized otherness led me to identify this new definition of scholarship. Exposed to the revolutionary writings of Trinh Minh, I began to understand the privilege of thinking and writing itself. This was my truth, my struggle. I was a homeless child who had to drop out of school in the sixth grade to support my family; I did not have time away from earning a loaf of bread. More importantly, I did not have the privilege of knowing what I would be doing from one moment to the next. Had it not been for the innovative intervention of a civil rights attorney who converted my several thousand dollars of fines and jail time for being homeless, into a community service assignment writing about my life, I would not have been able to express my ideas, my solutions, and my poverty scholarship. As a result, I was afforded the privilege to establish my vocation as a writer, turning my unrecognized street scholarship, which all poverty scholars possess, into a documented, understood, and “heard” tract. 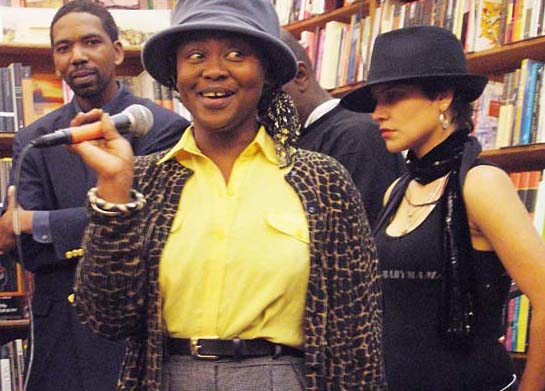 POOR’s Methodology
In the first year of our organization, we developed the notion of poverty scholarship, which was inducted into POOR’s core practices with the clear realization that poor folk had to flip the power of media, voice, and authorship. Poor people are inherently denied a voice in the media, the creation of legislation, and academic scholarship. Consequently, it became POOR’s goal to listen, conceive of policy, and reassign authorship to folks on the frontline of poverty and racism. In our formal workshops and leadership meetings, we established our radical notions of poverty journalism.

We also decided that poverty journalism must include an attempt at solutions. For example, in the Homefullness issue of POOR (Volume 1), we discussed the problems that poor folks have staying housed as a result of gentrification, displacement, and crisis. The solution developed by the poverty scholars was to address those obstacles, along with the danger of isolation, and disenfranchisement. Understanding the strength of the “village” and the importance of equity to create long-term economic self-sufficiency, we proposed a sweat equity cohousing project. And using a small slice of the Arts Commission grant, we realized the idea in a small apartment in the Tenderloin district of San Francisco.

In the year leading up to the release of the Hellthcare issue, we conducted a series of six-month-long workshops with very low income youth, age 12 to 17, who were interned in group homes and closed mental health placements. We launched a formal collaboration with a Bay Area agency that ran locked placements and schools inside and outside the public school system for severely emotionally disturbed youth. Unlike our previous workshops for youth, these spanned a semester and included a series of literacy exercises that tied in with the kids’ curriculum and were part of their school day.

At this point, we instituted POOR’S multi-generational learning and scholarship model. Our belief was that all members of the community needed to learn, grow, resist, and heal together, overcoming our collective experiences of broken school systems and/or broken or disempowered families that had been impacted or destroyed by the crime of poverty and or racism. Each workshop included a media literacy and social justice component that questioned the unjust society of haves and have-nots, raising awareness of the system that most of these youth were caught in, and the mythologies of capitalism that they were being spoon-fed by the corporate media on a daily basis. We integrated hip hop, spoken word, and grafitti into every lesson, redefining what journalism and art are, and could be, talking about how some of the best are on the walls of our neighborhoods, and in rhymes and raps. As Eduardo Galeano has so eloquently said, “The walls are the publishers of the poor.”

“Who do you think makes your shoes? Do you think the workers at Nike are getting paid fairly?” These questions would open the discussions, inevitably leading to a critique of media messages and corporate product-pushing, opening the students’ minds to other forms of survival and success.

“Who Would Call Themselves Poor?”
Perhaps the most important thing we dealt with was the shame inherent in the life of a poor kid. A shame so powerful that a kid would shoplift or take part in some form of unsafe underground economy just to attain the right shoes. A shame that would make a kid lie about being homeless, so they would not be “the homeless kid” in their school. We created a safe space for kids who had been the abused and the abusers, who had bullied and been bullied, and who were so confused about who to be and what to be. After an intensive discussion, we proceeded to create a series of images and stories that paralleled what the adult participants of POOR were digging into.

We asked them to describe through image and story what “poor” is. Most of them described everything but themselves. Everyone who had experienced poverty was everyone else; this is oddly like adults, never realizing their own colonization, always finding it easier to act as though it’s happening to someone else. Those stories opened up the discussion further into more specific explorations of the issues we were dealing with. For example, how was their mother or father treated when they tried to get medical help at a county emergency room?

In another class we asked the question: What is “work”? This led to a fascinating examination of underground economies and economic survival through alternative means. The kids knew very well that if you had to live on welfare you would need to do some kind of “alternative” work.

The youth aced POOR’S empathy exercise, one that college students are routinely stumped by, a two-part question that asks, “What has been your worst financial crisis?” We then set up a virtually impossible scenario, one faced by most very low income parents: You are a single parent with three children aged one, three, and five. You just acquired employment, which was very difficult for you to obtain because you have no high school diploma and it’s a very competitive job market. It’s a 40-hour-a-week job but you can only get childcare for 15 hours a week. This means you will only end up with enough money to cover the cost of your childcare and utilities, but not enough for rent. What would you do?

“There is no ‘legitimate’ solution,” the kids would immediately blurt out at every version of that quiz. “The only thing that mama can do is something that isn’t legal or ‘acceptable.’” The kids were poverty scholars and survivors. They had been there with their poor parents, making those impossible choices, diving into that vicious cycle. They knew that you did what you had to do to feed yourself and your children, and that might mean committing crimes of poverty. That year-and-a-half of workshops inspired me, terrified me, and brought me to endless tears. These kids needed us there for a lot longer, but the limited funding we’d gotten from a grant for the workshops ran out, and we had no money to stay on for free. In our last group of classes, they each gave us a book with their pictures, and pages filled with promises to keep on writing, resisting, and caring for their communities and families.

Solutions
The process of true integration, true recognition of poverty scholarship occurs in many ways. In media production, it means a through-line of involvement of the process and the ownership of a story. A story on homelessness in Alameda County should be co-authored by homeless poverty scholars in Alameda County. In service provision, it would mean that community-based, poverty, race, and disability scholarship would lead the discussion on service provision, school, and healthcare systems. Solutions that truly “serve” folks, like schools that truly integrate families and community, would be proffered and established rather than 1.2 million dollar poverty pimp programs, county hospitals, and No Child Left Alive. In activism, it means the understanding that poverty, race, disability, elder, and youth scholars must lead the resistance movements against globalization, environmental racism, and economic justice. These movements must come from and speak to the direct experience. In academia, it means that truly grassroots poverty scholars are integrated into teaching and learning. Community models of teaching and learning are recognized, and poverty, native, youth, and elder scholars are credited for the teaching they are already doing in the community and neighborhoods with poor communities of color.

Tiny a.k.a. Lisa Gray-Garcia is co-founder of POOR Magazine and author of Criminal of Poverty: Growing up Homeless in America.

Download or view a pdf of this article (248KB).