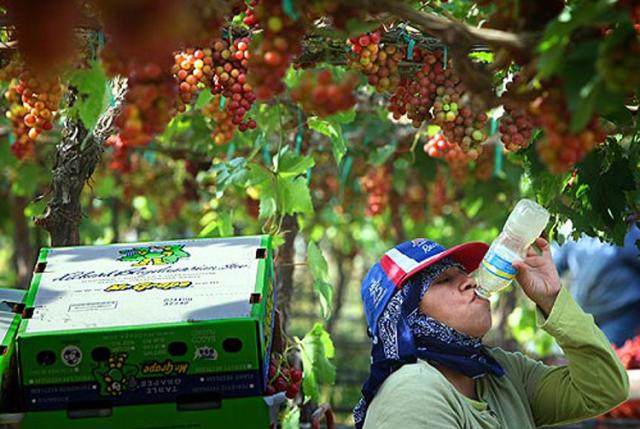 home in East Orosi, Tulare County by the local water provider. The tap water, she learned, violates the Environmental Protection Agency’s (EPA) health standards for nitrates, which cause cancer and blue baby syndrome.

Surrounded by orange, peach, nectarine, and grape fields, East Orosi (population 500) has an irrigation canal that runs down its main street. Synthetic fertilizers applied to neighboring farms have seeped into its drinking water.

“[The water board] said they would control it, but they put a chemical in the water [that] made it worse. And we still have nitrates,” says Sanchez, and adds: “A lot of us are low-income [but] we buy bottled water... When we run out, we have to be asking our neighbors for rides. Sometimes people even take their gallons and walk a mile to the next town.”

Jessica and her family are not alone. Tens of thousands of San Joaquin Valley residents lack clean, affordable drinking water, and climate change threatens to exacerbate the crisis.

Water in the San Joaquin Valley
The San Joaquin Valley—comprised of San Joaquin, Fresno, Kern, Kings, Madera, Stanislaus, Merced, and Tulare counties—is one of the most agriculturally productive areas of the United States. The entire Central Valley of California, from Mount Shasta in the north to the Tehachapi Mountains in the south, generates 13 percent of all farm sales in the country, of which over two-thirds comes from the San Joaquin Valley.[1]

The Valley’s hot summers are ideal for growing, if you can secure a water source. The farms import irrigation water from over 400 miles away through a series of canals and aqueducts fed by the Sacramento Delta—an expansive estuary where waters from Northern California rivers, the San Francisco Bay, and the Sacramento and San Joaquin rivers meet. It is estimated that agriculture consumes 80 percent of all water used in California.

The federal government spent billions of tax dollars to build the dams, canals, and pumps required to transport the water (most of which goes to large, corporate farming enterprises 2) that farmers receive at reduced rates. According to the Environmental Working Group, growers in the San Joaquin Valley receive an estimated $416 million per year in subsidies. The state has also borrowed millions of public dollars to provide drinking water for urban areas in semi-arid climates.
California’s vast water infrastructure has caused extensive, ongoing environmental damage: the diversion of rivers, such as the Trinity and the San Joaquin, has harmed wildlife dependent on the rivers; and the large quantities of water pumped out of the Delta have caused its ecosystem to crash. Recent federal court decisions seek to limit water flow out of the Delta to protect smelt and other endangered species.

Water for Farms, not for People
Over 90 percent of communities in the San Joaquin Valley rely on groundwater—vast, underground lakes—for their daily needs, but this water has been contaminated by agriculture and dairy operations throughout the valley. The U.S. Geological Survey found nitrates—attributable to “human activity”[3]—in virtually all the groundwater wells in the San Joaquin Valley, and about a quarter of them exceeded health standards. 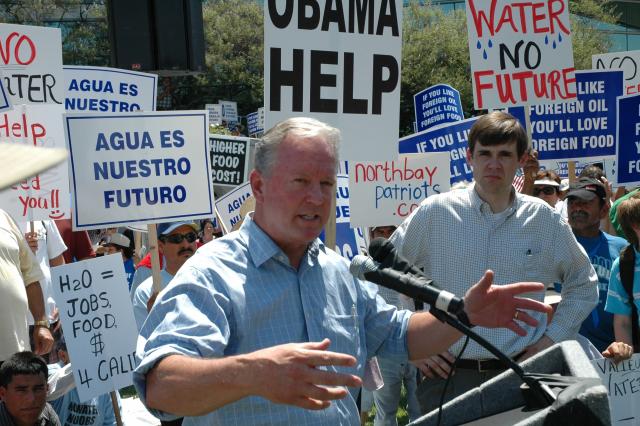 In fact, over half of all drinking water health violations in California occur in the Central Valley, exposing around 400,000 people to a variety of illnesses. Common contaminants include arsenic, a naturally occurring carcinogen, and the banned pesticide DBCP, which forced the City of Fresno to shut down several municipal wells.

It is nearly impossible to identify a single source of the pollution. The majority comes from pesticide- and fertilizer-laced water run-off from farm fields and dairies. These fertilizers are virtually unregulated, and only a handful of pesticides have health standards. Yet, California is the only state in the country, besides Texas, lacking in comprehensive groundwater protections.

As Susana De Anda, codirector and cofounder of the Community Water Center of Tulare County, which works to ensure equitable access to safe, clean, and affordable drinking water for all communities, points out: “Even if you can treat the water, if you rely on groundwater as a source of drinking water and the polluting entities around you are not regulated, you are pretty much waiting to get contaminated again.”

The largely Latino and immigrant Valley residents—over a fifth of whom live in poverty with a per capita income that is 26 percent lower than in the rest of the state[4]—are forced to buy water filters and bottled water to safeguard their health.

Bearing an Even Larger Burden
By the end of this century, temperatures in California are expected to increase three to 10 degrees. This does not bode well for the residents of towns like East Orosi in the Central Valley who may expect the number of extreme heat days to increase from less than 20 per year to at least 40, with a resultant doubling or tripling of heat-related deaths. Health surveys indicate that over 20 percent of farm workers lack drinking water in the fields[5] and the United Farm Workers have already documented a rise in heat-related deaths because of a recent drought.

The rise in temperatures is also expected to shrink up to 70 percent of the “reservoir” of the Sierra Nevada snow pack, which feeds the Northern California rivers, causing agriculture to lose 20 percent of its irrigation water.[6] This could make growers more reliant on pumping groundwater, further reducing water access for communities while increasing contamination—especially if growers increase pesticide and fertilizer use to address changes in crops and seasons. The expected cutbacks in farming operations would also result in job losses among farm workers.

Furthermore, changes in the way the snow pack melts are expected to increase the intensity of spring runoffs, leading to an increased risk of flooding, which in turn will be exacerbated by the projected seven- to 35-inch rise in the sea level.[7]
A rise in the sea level would also threaten more than 1,000 miles of aging levees in the Delta and could result in massive flooding. The levees protect dozens of islands—harboring agriculture and communities—from tidal flooding. Many islands have already sunk as a result of extensive alterations to the ecosystem, some lying as much as 15 feet below sea level.[8] Low-income residents are more likely not to have in place either the structural barriers to protect their homes or flood insurance. The result could be another disaster like Hurricane Katrina, which starkly demonstrated the disparities between government disaster assistance to the white middle class and poor people of color.[9]

Farce as Policy
A series of recent farces around California’s water politics highlight the need for a radical change in direction. Conservative politicians, ranging from San Joaquin Valley mayors to Governor Arnold Schwarzenegger, have revived the tired old debate of environment vs. jobs, without addressing the pressing health concerns of communities like East Orosi.

During the summer of 2009, conservative talk show host Sean Hannity filmed dramatic rallies in the midst of fallow San Joaquin Valley fields. With teasers, like “California farmers left high and dry after government picks fish over people,” Hannity publicized the need for the federal government to continue supplying irrigation water for agriculture in the Central Valley, after recent efforts to cut back water deliveries and protect the Delta ecosystem. Hannity featured the California Latino Water Coalition, which purports to represent farm workers left jobless by radical environmentalists but is actually comprised of large water districts and valley politicians operating under the guidance of a public relations firm—the same one that represents Blackwater, the military contractors.

The film does not reveal that many farm workers holding signs at the rallies were paid to attend by growers—the same growers who have failed to negotiate with the United Farm Workers over providing drinking water in the fields and who pay their labor force the lowest rates in the state. While pushing for more funds to offset water shortages, these growers have yet to adopt basic water conservation and efficiency measures, which would create substantial water savings.

“Industry and many policy makers want to maintain the status quo and use the same old strategies, like dams and canals, that have got us into this mess today. Politics as usual is not even sufficient for our problems now, much less for a future with climate change,” says Debbie Davis, a legislative analyst with the Environmental Justice Coalition for Water (EJCW). The EJCW and other organizations have successfully fought off two multi-billion dollar bond proposals and several water bills that would have perpetuated California’s unsustainable and inequitable water policies.

AGUA Fights for Clean Water
Despite the potentially disastrous impacts of climate change, the crisis also represents an opportunity to move toward environment-friendly programs with the potential to mitigate long-standing injustices, such as green water-treatment technologies and vegetation buffers to promote the replenishment of groundwater and reduce contaminants.

Down in the Valley, Jessica Sanchez and her mother have helped start a grassroots coalition of communities fighting for safe drinking water, called Asociación de Gente Unida por el Agua, or AGUA. They, along with 17 other communities, have been organizing residents around the issues of contamination and regulation and working to provide solutions for communities that don’t currently have clean drinking water. Change is in the water for California climate politics.

Amy Vanderwarker is a consultant who works on environmental justice and water issues.