The Lake Merritt BART station is tantalizingly close to several of Oakland’s busiest corridors—downtown, Chinatown, and Lake Merritt itself. Yet, the area surrounding the BART station is surprisingly low-key, characterized by quiet apartment buildings, several parking structures, some sparse foot traffic, and a small, usually deserted park where 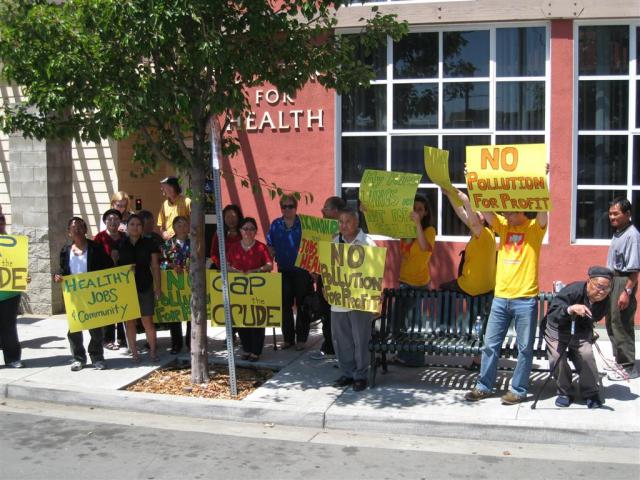 Asian seniors can be seen practicing tai-chi early in the morning. BART riders come and go but don’t linger. This neighborhood, though, is slated to become a “transit-oriented development” in a few years—one of several throughout the Bay Area.

TODs, as they are called, are neighborhoods planned within a half-mile radius of a transit hub. The idea is to incorporate mixed-use development—housing, small businesses, and services—within walking and biking distance of a major transit stop. The reduced car traffic, coupled with the increased public transit ridership, makes the transit system more efficient overall.

Transforming Transit
Last year, the Metropolitan Transportation Commission (MTC) awarded 20 grants totaling $7.6 million to Bay Area cities and counties to develop plans linking land use and transportation—a legacy, advocates say, of California’s two recently enacted laws addressing the climate crisis. The laws, though still in the early stages of implementation, are being closely watched around the country as cutting edge approaches to reducing greenhouse gases through land use and transportation planning. AB32, the Global Warming Solutions Act of 2006, establishes a statewide cap on greenhouse gas emissions by 2020. Its companion SB375, requires local planning organizations across the state to show that their land use policies result in carbon reduction.

TransForm, the statewide transportation policy advocacy coalition, has been deeply involved in the new transit projects with the goal of making sure that local communities usually left out of planning decisions—low-income workers and people of color—are included in shaping the development process.

“We’ve got to get people involved early [because] there’s a huge learning curve [before] the community [can] identify its needs and address them in the planning process,” says Joel Ramos, TransForm’s community planner, adding that they hope “to grow this model [and] shift the whole paradigm of planning.”

The Development Process
Typically, planning processes are set up to meet the needs of the developers and expedite the project, Ramos explains. That kind of inaccessibility, along with the specter of gentrification, makes the challenge of engaging local communities even more important. With the Lake Merritt BART Station Area project, local groups and advocates have begun organizing and participating at the front end of a two-year long planning process.

“We see an opportunity here to assert a strong vision and set of policies for how a transition to green communities can and must advance racial and economic justice,” says Mimi Ho, program director for the Asian Pacific Environmental Network (APEN). “We need to show how narrow green policies can be, and how they can lead to racial inequities and further polarization of wealth. We want to put forward a platform for green, healthy, and just communities that’s grounded in the needs and hopes of our grassroots base.”

APEN is part of the Great Communities Collaborative coordinated by TransForm to organize local stakeholders, identify community needs and concerns, and ensure democratic participation in the planning and decision-making. Local stakeholders for the Lake Merritt Station include Asian Health Services, the Buddhist Church of Oakland, the Oakland Chinatown Chamber of Commerce, Laney College, and BART.

For APEN, with more than 300 active members in the Chinatown and surrounding neighborhoods, the development project is important on multiple levels. It is an opportunity to win concrete improvements to residents’ lives while establishing a model for city planning that creates green jobs, green affordable housing, and sustainable communities. It is also a test for building power with a broad coalition of diverse interests.

“The biggest challenge will be to get our voice across in the decision-making committee,” says Wayne Leung, director of APEN’s Power in Asians Organizing project, which organizes Chinatown. “APEN [occupies] only one of over 50 seats in the steering committee [and] even though we know what we want, it’s really hard to get those ideas across.”

Moving Forward
The planning process, begun in 2008, is now holding regular workshops and orientations for community members, including a series of “charrettes” where developers and stakeholders consult over design models and draft plans. At the end of the two-year process, a blueprint is expected to be submitted to the city council for approval.

Community groups have been busy trying to engage their bases—despite a wide range of interests and perspectives among stakeholder groups—to develop a consensus for the project’s vision and advocate for a real place at the decision-making table. Now coalition members have begun to realize that they need to come together to pull more weight with the city council and big institutions like BART and Peralta Community College.

“It’s been really important to develop a close relationship with the city staff who are implementing the project,” says Julia Liou, planning and development manager with Asian Health Services, “and also to agitate for an infrastructure by which the community can voice their concerns—not just through community meetings, but at the table [so that] decisions [made] address the needs of the stakeholders.”

In addition to its community clinic and health advocacy work, Asian Health Services also worked with local allies on the “Revive Chinatown” project, which resulted in streetscape improvements, such as four-way crosswalks laid out with elaborate red and gold designs. That history in the neighborhood has helped immeasurably when working on the Lake Merritt project, Liou points out. “There are always hot button issues, but at least we know we can dialogue—we can say, let’s try to figure it out,” she says.

Community Priorities
Last year, stakeholder groups surveyed over 1000 community members to identify needs and priorities. The top three concerns were: public safety, jobs, and affordable housing, which have been incorporated in the general vision.
The redeveloped Lake Merritt BART community will have lots of open, as well as multi-use space to accommodate such diverse local residents as Asian seniors, Chinatown youth, and Laney students. It will have plenty of street lighting, less traffic congestion, and sidewalk improvements to enhance pedestrian safety. There will be green-built affordable housing with ground-level retailers and services that meet the needs of the community. The neighborhood, potentially a vibrant corridor to many of Oakland’s central destinations, will no longer be “the hole in the doughnut,” as Ramos puts it.

According to Leung, the project has energized APEN’s base-building, because “People feel like it’s a great opportunity to raise the community voice.” And, he adds: “It’s a good way to get them engaged in environmental justice and climate change issues in a real world context. They can see how EJ works and how they can be a part of it. Sometimes, when we talk about climate justice, it’s all the way up in the air. This is something we can pull down to the ground.”

Tram Nguyen is the media coordinator of the California Reinvestment Coalition. She was formerly executive editor of Colorlines.