“Land use-related climate change policies have the potential to be among the most cost-effective and efficient ways of reducing greenhouse gas emissions,” writes Rebecca Carter in her report on climate policies in western states. (See page 59.)

SB375 integrates land-use, housing, and transportation planning on a regional level for the first time. It provides a new tool to build sustainability, though it puts that tool in the hands of appointed regional planning bodies that have a poor track record on investing in social equity.

SB375 requires each MPO to add a broader vision for growth, called a “Sustainable Communities Strategy” (SCS), to its transportation plan. The SCS must lay out a plan to meet the region’s transportation, housing, economic, and environmental needs in a way that enables the area to meet the greenhouse gas emission, reduction targets set by the California Air Resources Board under AB32.

Nothing in SB375 forces cities or regions to comply with the SCS, nor does it provide direct funding. Instead, the legislation relies on incentives. Funding for new transportation projects will hinge on the projects’ fitting into the SCS. Some small residential and mixed-use projects located very near transit will be exempt from the entire environmental review process under CEQA (California Environmental Quality Act). Other residential or mixed-use projects that match the SCS criteria will have a streamlined permitting process. If a city can’t meet the goals of the SCS, it has the option of adopting an Alternative Planning Strategy that outlines the steps needed to meet the SCS targets.

As transportation justice advocates have learned, the MPOs at the heart of the SB375 planning process don’t reflect the demographics of their areas and often fail to address the needs of low-income residents.* The Metropolitan Transportation Commission, for example, which functions as the MPO for the nine-county San Francisco Bay Area, gives smaller counties like Napa, with just 136,000 people, half the votes of Alameda County, with over 1.5 million people. As a result, the MTC has consistently slighted bus service in favor of rail, and has failed to address multibillion dollar operating shortfalls in bus systems that low-income urban residents depend on.

“We haven’t seen the MTC advance an equity agenda,” says Urban Habitat Transportation Program Director Bob Allen. The new legislation raises the stakes for democratizing the regional planning bodies and reforming their governance to reflect equity. Such changes would allow for social as well as environmental gains under the new legislation.

“SB375 could give us an opportunity to use the SCS to advance not only sustainability but also social equity by prioritizing investment in high-quality, adequately funded bus systems,” says Allen.

Urban Habitat has been building power with low-income people and commmunities of color since 1989. Vu-Bang Nguyen, Mary Small and Marcy Rein contributed to this article. 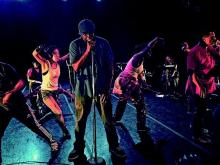