Lumumba Di-Aping: ‘We have been asked to sign a suicide pact’ 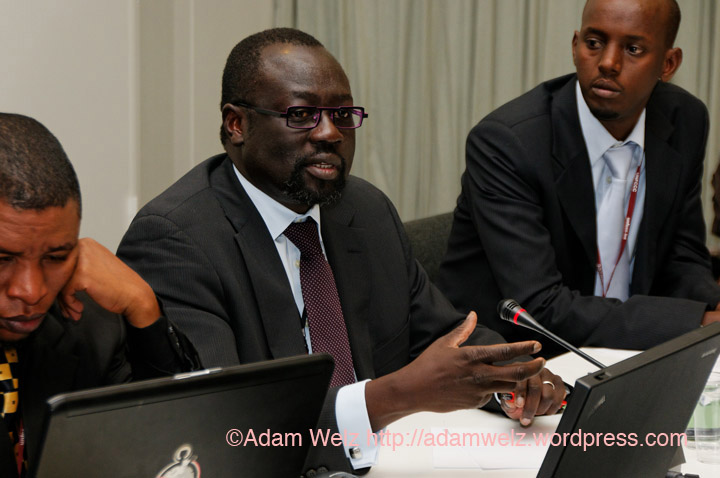 Lumumba Di-Aping speaks passionately during climate talks at the African civil society meeting at Bella Center, Copenhagen, on Dec. 8. – Photo: ©Adam Welz Copenhagen, Tuesday, Dec. 8 – The leak of a so-called “Danish text” that would sideline the U.N. in future climate deals is reverberating around the Copenhagen negotiations.

Today I witnessed an unexpected and extraordinary outburst of candor from one of the key players in these negotiations – Lumumba Di-Aping, Sudanese by birth and chief negotiator of the so-called G77 bloc, which mostly consists of poor countries.

I attended an ad-hoc meeting in the Bella Center attended by about 100 African representatives of civil society and a few African parliamentarians – among them Lance Greyling, an member of Parliament from South Africa – this afternoon. The meeting was called at short notice and its agenda was not announced.

After a few minutes of introductions Di-Aping was given the floor to speak to fellow Africans. Requests were made by organizers to turn off all microphones so as not to record what was going to be said, although Di-Aping made a point of turning his on, saying half-jokingly, “They are probably listening anyway.”

He did not start his speech immediately. Instead he sat silently, tears rolling down his face. He put his head in his hands and said, “We have been asked to sign a suicide pact.” The room was frozen into silence, shocked by the sight of a powerful negotiator, an African elder if you like, exhibiting such strong emotion. He apologized to the audience, but said that in his part of Sudan it was “better to stand and cry than to walk away.”

Once he had composed himself, Di-Aping launched into an eloquent and direct attack on the apparent subversion of the climate negotiation process by certain developing countries, the leaked so-called Danish agreement that has become the talk of the conference. Since I did not feel it appropriate to stand up and video the proceedings, I live-tweeted what I could (www.twitter.com/adamwelz).

Speaking in measured tones, Di-Aping first attacked the 2 degrees C warming maximum that most rich countries currently consider acceptable. Referring continuously to science, in particular to parts of the latest IPCC (Intergovernmental Panel on Climate Change) report, which he referenced by page and section, he said that 2 degrees C globally meant 3.5 degrees C for much of Africa.

He called global warming of 2 degrees C “certain death for Africa,” a type of “climate fascism” imposed on Africa by high carbon emitters. He said Africa was being asked to sign on to an agreement that would allow this warming in exchange for $10 billion, and that Africa was also being asked to “celebrate” this deal.

He then went on to forthrightly address the weakness of many African negotiating delegations, noting that many were unprepared and that some members were either lazy or had been “bought off” by the industrialized nations. He singled out South Africa, saying that some members of that delegation had actively sought to disrupt the unity of the bloc.

He said that civil society needed to hold its negotiators to account, but warned of a long and difficult struggle for a fair climate deal. He used words to the effect of “you have no idea of the powers that are arrayed against you,” spoken in the tone of someone who has spent years interacting with these powers.

He said that people all over the world had to be made aware of what a bad climate deal means for Africa. “I am absolutely convinced that what Western governments are doing is NOT acceptable to Western civil society,” Di-Aping declared.

He explained that, by wanting to subvert the established post-Kyoto process, the industrialized nations were effectively ignoring historical emissions. And locking in deals that would allow each citizen of those countries to carry on emitting a far greater amount of carbon per year than each citizen in poor countries would prevent many African countries from lifting their people out of poverty.

This was nothing less than a colonization of the sky, he said. “Ten billion dollars is not enough to buy us coffins.”

Obama, he said, would probably be brought to Copenhagen to “sanctify” this deal. “What is Obama going to tell his daughters? That their [Kenyan] relatives’ lives are not worth anything? It is unfortunate that after 500 years-plus of interaction with the West, we [Africans] are still considered ‘disposables.’ … My good friends … we’ve got to get together and fight the fight.”

Di-Aping accused a group of U.S. industrialists behind an organization called the Climate Works Foundation of being behind the efforts to sideline the process and African countries, noting that rich governments did not want to pay the true cost of climate change or confront their own citizens with the urgent need to change their lifestyles.

Calling the current deal that was being proposed “worse than no deal,” he called on Africans to reject it, saying, “I would rather die with my dignity than sign a deal that will channel my people into a furnace.” Africans had to make clear demands of their leaders not to sign on. He suggested a couple of slogans: “One Africa, one degree,” and “Two degrees is suicide!”

Di-Aping’s speech crystallized the room into action. A demonstration was immediately planned, and a few minutes after its end the people in the room converged on a central point in the Bella Center and began chanting and shouting – attracting a storm of media interest. Di-Aping later addressed a formal press conference, where he repeated some of the points made in the African meeting, apparently no less eloquently but far less emotionally.

Calling the current deal that was being proposed “worse than no deal,” Lumumba Di-Aping called on Africans to reject it, saying, “I would rather die with my dignity than sign a deal that will channel my people into a furnace.”

Some commentators have suggested that the leak of the so-called Danish proposal will not significantly affect the progress of the talks here. After witnessing Di-Aping speaking to the African group, I am not so sure.

It’s becoming increasingly clear that many rich countries are seeking a deal that falls well short of what the vast majority of current science indicates we need to do to avoid extremely damaging climate change and that representatives of people in poor countries are becoming increasingly fed up at their ongoing marginalization by the rich governments. The divide between the civil servants and NGO managers lazily discussing career options on the train across Copenhagen and those that have grasped the urgency of climate change is becoming more apparent.

With clear, credible voices like Di-Aping’s articulating the frustration of so many, are we seeing a fracturing of the Copenhagen process? Is this conference, which seems to be trying so hard to be just another “normal” conference, with ordered meeting halls, name tags and too many glossy brochures floating around, going to turn into something really historic and interesting?

A note: Di-Aping mentioned in his speech that he was named after the famous Congolese leader Patrice Lumumba, even though he was Sudanese. “My parents were Lumumbists,” he said. Patrice Lumumba was of course murdered after asserting himself too strongly against Western powers and replaced by the famously corrupt but U.S.- and Belgian-friendly Mobutu Sese Seko.