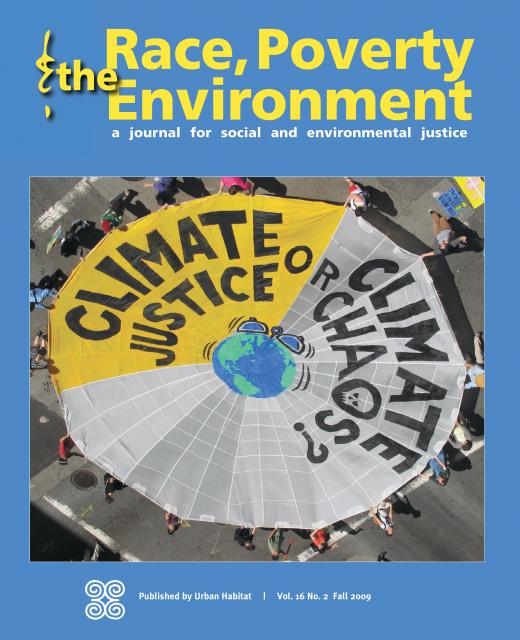 I started this issue as a skeptic of climate change. I didn’t doubt its reality, the human contribution to it, or the threat it represents to the ecological health of the planet but I doubted that this crisis created an organizing moment that could benefit low-income people and communities of color. When Race, Poverty and the Environment covered this topic in 2006, [Clarke] efforts within the United States to organize in response to climate change were scattered and largely led by white environmentalists. We had to turn to a Canadian author to find a succinct description of a framework for green economics. [Milani]

Since then the global crisis has become more apparent and we have seen the development of a much broader engagement in climate justice organizing. Judging from the wide-ranging responses we received to our call for submissions, a movement is emerging.

In this issue, we share the voices of over fifty environmentally engaged advocates rooted in the concerns of their communities. [Contributor List]  In thirty articles and a dozen “voices of climate justice” segments, we have endeavored to present a cross-section of diverse elements acting at the municipal, regional, state, national, and international levels. [Table of contents]  They are far too numerous to cite individually here. (Our online readers can follow the inline links to the individual articles.) I’m deeply grateful to these many contributors for sharing their analysis with me and with our readers.

The devastating and disparate impact of climate change makes itself felt across the spectrum of issues and organizations. Non-governmental organizations,  [Hoerner and Robinson] unions, [Ellis-Lamkins and Moody] faith-based communities, [Carmichael] and international agencies are all wrestling with this critical challenge, whether they are dealing with jobs, [Jobs] transportation, [Porchas] land-use, [SB375] housing  [T. Nguyen] or food. [Food and Agriculture] Historical and current projects offer lessons that we need to take into account to strengthen these efforts. And if we can learn these lessons, an opening exists for a grand coalition of the peoples of the Global South with the grassroots movements within the United States. [Dayaneni]

The intersection of the movement for racial justice and environmentalism led to the evolution of the environmental justice movement and two decades of mobilization, organizing and policy advocacy to shift the balance of the burdens and benefits of the impacts of the fossil fuel industries. [The Toxic Environment]

The major environmental justice fights of the past have dealt with fossil fuels and their by-products: coal, oil and gas; pesticides, fertilizers and mechanized agriculture; transport in the form of tankers, ports, freeways; and the consequent spills, emissions and pollution of water, ground, and air. [Porchas, C. Harvey] And these battles over power generation, [Arce] extraction, refining, [Choy & Orozco] workers’ health and safety, [Davis] disposal, [V. Nguyen] and incineration [Wysham 2] are also central to the battle for climate justice.

But for the emerging movement to be effective, it must now advance beyond the fusion of environmentalism and racial justice to a more direct consideration of economic justice. [Chomsky] The ecological crisis is rooted in an economic system that requires growth, inequality, and the exploitation of humans and nature itself. Changing course on climate will require fundamental change in our ways of doing business and the power relations that sustain them. [Movement Generation, Swan]  Re-organizing where and how we work, reside, play, educate and celebrate our lives will mean simultaneous change in many areas. The economy is the central mediator on all these fronts.

State-corporate collaboration has created the conditions for this crisis and cannot solve it. The technocratic vision of a commoditized carbon cycle with new layers of profit and speculation and high-tech solutions, like genetically modified plants to be used as fuel stocks, will not work. [Smolker]

Nor will vast industrial plants building solar panels with the same old exploitative employment relationships and unfair international trade arrangements. [Davis] Building a coalition that can effectively energize worker organizing is a crucial part of the task before us. We need to build a movement that defines the word “environment” to include the work environment and defines a “green economy” as one that is just and sustainable, not a green-washed capitalism. [Shekar]

Though the climate bill currently before the U.S. Senate contains some notable advances in the creation of green jobs, it codifies business as usual. [Wysham, Ellis-Lamkins] Turning cap and trade over to the financial sector and the oil, coal and utility companies that have brought us to this deep state of disequilibrium with nature is no solution at all. [Chomsky]

The fate of Van Jones, who resigned under fire as the presidential advisor on green jobs, points up the importance of cohesive, coherent, consistent organizing at the base to advance our own solutions. [Crowfoot, Weinrub] Lacking this, the placement of a few spokespersons at a national level only provides a pulpit from which to deliver message. An effective movement needs to do more than elevate spokespeople. It needs the ability to take power at the level of city councils, local water boards, planning and utility commissions, metropolitan transportation organizations, state legislatures and throughout the political process. [Ellis, Carter, Rangel-Medina, Marchant]

Input and participation without power are futile exercises that end up disillusioning and demobilizing popular organization. For this reason so called resiliency organizing, which increases the capacity of communities to control their own economic and social resources, can make a difference politically across a whole host of interrelated issues, including climate. [Movement Generation, Brown]

This sort of radical restructuring won’t be easy. It may be as large as the shift of human societies from hunter-gatherers to agriculturalists.[Fujita,] But a species-level response is required. It will require not only a shift in our way of living, but in our way of thinking. We will need to understand that the market is no substitute for democratic decision-making and human “superiority” over nature is a dangerous fiction. This is well understood by indigenous people who are taking leadership in the movement stirring in the Global South and within the United States. [Weng, Trask,  Goldtooth] As in previous battles for justice, the impetus can only come from the dispossessed.

The emerging movement for climate justice provides an new platform to mobilize for age-old principles of social justice. Because of the planetary parameters of the problem this movement has a unifying potential for the species as a whole. Climate change respects no borders and neither can our organizing. Emissions reductions in one country is not an option. Climate change must be solved, locally, regionally and globally. It’s a tough test, but one that we can pass—or fail.