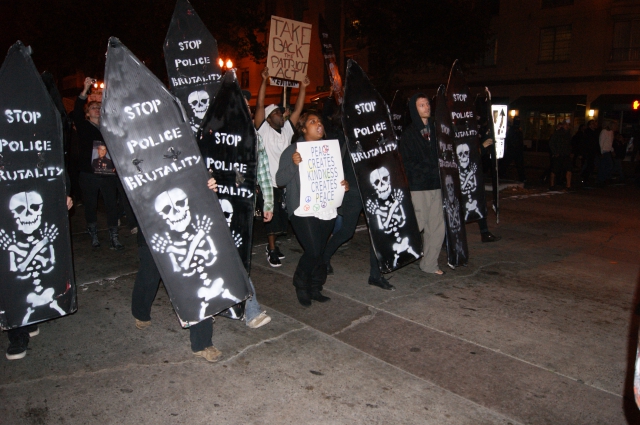 “The Force” is a recently released documentary film that provides an intimate view of Oakland Police Officers in a department attempting progressive reforms.  Director Peter Nicks aims to “humanize” the police in his film in order to expand two-dimensional portrayals of law enforcement.  The director had unprecedented access to the department for two years, where he filmed recruit training sessions and conversations among top brass.  The humanizing strategy is largely accomplished through repeated close-up shots of then-Police Chief Sean Whent as he gives inspirational speeches to new recruits and offers heartfelt reassurance to residents during community meetings.  The cops are consistently portrayed as rational and earnest human characters, but this depth contrasts with de-humanizing scenes of faceless protesters, angry residents, and dead brown and black bodies.  At best, this film represents a missed opportunity to address many of the most critical issues facing the United States today, including racialized police shootings, the Black Lives Matter movement, urban poverty and inequality, a crisis in government credibility, and mass multi-racial activism.  At worst, the film restages a standard settler colonial drama on the ‘mean streets’ of contemporary Oakland, where caring OPD leaders and outnumbered beat cops struggle to survive against protesters and residents portrayed as an anonymous hostile horde.

Labeled a “documentary” in some listings and “thriller/documentary” in others, this confusion in genre produces a frustrating viewing experience and ultimately contributes little to a better understanding of policing practices in Oakland.  The genre of the “The Force” is more ‘TV cop show’ than informational, with sensationalizing taking precedent over content.  The film’s observational style includes no voice-over narration, only occasional chyron (brief explanatory text over a scene).  A series of loosely connected jump cuts and repeated close-up shots of faces (a “humanizing” strategy) neither tell a story, nor succeed at informing.  Contrary to claims of transparency, allowing visual scenes to ‘speak for themselves’ is a filmic strategy intended to produce the effect of unmediated truth, but this “fly on the wall” pretense is fundamentally dishonest.  While the presence of the camera is invisible to the viewer, the obvious presence of a film crew influences the behavior of those being filmed.  Particularly in the case of Sean Whent, who appears in over thirty shots in the film, this filmmaking strategy masks the highly performative quality of these moments.  A pulsing electronica-style soundtrack (a decades-old sonic strategy appropriated from “Jaws”) recurs throughout the film and merges with the sound of helicopters at times.  The dramatic tension in the music conjoins with fragmented nighttime scenes of poorly lit urban streets and the flashing lights of police cars, as young police recruits face unruly mobs at side shows (illicit driving performances which are popular in Oakland) or unsuccessfully try to compel residents to provide information on neighborhood crime.

Camerawork in “The Force” obscures more than it reveals, given the absence of social context.  While the cinematography is impressive at times (and Director Peter Nicks also served as cinematographer), artsy camera angles and tense street shots from the police point-of-view emphasize visual spectacle, and often create contrast between police faces and protesters who are introduced through a low-angle shot of marching legs at night.  Because the film depicts police officers sympathetically throughout, scenes of angry or uncooperative residents largely construct people of color in Oakland as emotional and irrational.  With the exception of a few scenes that show frustrated community members speaking at town halls or political meetings led by Cat Brooks, a radical community activist who co-founded the group “Anti-Police Terror Project,” the numerous organizations in Oakland concerned with police brutality are completely omitted from the film.  In addition to Black Lives Matter, Bay Area organizations combatting police violence include the Barbershop Forum, Poor Magazine, Standing Up for Racial Justice (SURJ), Oscar Grant Committee, Copwatch, street-level urban ministers like Harry Louis Williams, and Occupy4prisoners.org links to approximately 75 groups actively engaging police and incarceration issues.  However, the few moments depicting extreme distrust between poor people of color and the police are probably the most accurate elements of the film. 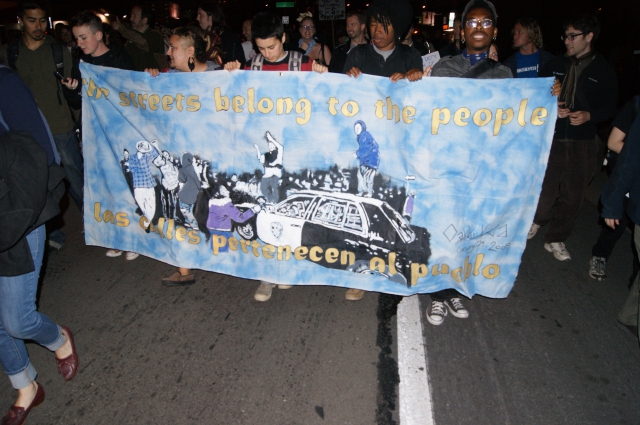 “The Force” avoids critically important topics; for example, the OPD is one of the most racially diverse police departments in the country, but does this make a substantial difference in policing practices?  One short scene shows a young black female recruit who appears frustrated at being shut out of a conversation with her male peers during a training session, suggesting serious problems with sexism in the department.  For a fleeting moment, this scene reveals a darker side to the fresh-faced recruits.  While analyzing a police training video (from a real incident filmed from a police dash cam), many recruits justify the multiple shots fired that killed a subject, even though he was many feet away from the officer and only armed with a knife.  Their light-hearted discussion becomes chilling when the recruits rationalize the death as necessary to “neutralize a threat.”  The OPD’s choice to use actual footage of a person’s death, followed by their loved one running towards the scene screaming, reveals a military-style technique aimed at desensitizing recruits towards the killing of human beings.

During community meeting footage with Chief Whent, Oakland residents raise important issues for daily life, including the lack of city resources dispersed to poor neighborhoods. Whent acknowledges the slow police response time in some areas and he apologizes for the lack of department action to protect poor residents and their property, but this interaction is framed as the department earnestly doing its best with insufficient resources.  The film doesn’t address extreme inequality and disinvestment in Oakland that affects everything including emergency services, public schools, employment, and food options, since West Oakland is a “food desert.”  While much of the Bay Area enjoys a robust economy, black unemployment is three times the average.  Oakland schools have become re-segregated by race and class, and the lack of educational resources in poor areas results in low academic achievement.  Public schools in the wealthy Oakland hills typically raise an additional half million dollars in annual donations from parents so their children will have highly qualified teachers, libraries, and art programs.  In fact, “The Force” omits the vast majority of the city of Oakland and only focuses on impoverished areas of West and East Oakland.  Viewers need to understand that there is enormous wealth in the Oakland Hills, in Rockridge, and other districts, so in “The Force” most of the city is absent, especially the powerful (the real force?)

Core questions, like who the police actually “serve and protect,” and whether the police actually prevent and solve crimes, are never addressed in “The Force.”  Another fundamental question concerns why the OPD is undergoing these reform efforts at this time.  The film briefly mentions that the department has been under Federal oversight (for fourteen years now!) but provides no further information regarding the significance of a major police corruption scandal involving officers known as The Riders, who were convicted of illegal activities including planting evidence and brutalizing residents.  In 2003, the City of Oakland paid over $10 million as a settlement to over 100 plaintiffs in the case, which was represented by civil rights attorney John Burris.  Burris has had the most sustained role in defending residents in police misconduct cases in Oakland and yet the film omits Burris entirely.  In 2011, the department was criticized for extreme use of force during Oakland’s Occupy movement, especially for severely injuring protester and Iraq war veteran Scott Olsen, who lost part of his skull and endures permanent brain damage after being hit by a ‘non-lethal’ police projectile.  Olsen was awarded $4.5 million from the City in 2014.  Oakland has historically paid out frequent, large settlements in police brutality lawsuits, costing the city millions that are out of proportion to the size of the population.  After spending a reported $74 million in 417 lawsuits since 1990, costs and liability factors are a significant reason for police reform and a major issue that is absent from the film.  Fatal officer-involved shootings of unarmed black men continue, including the killing of Demouria Hogg, which occurred about the same time “The Force” was in production.

Serious problems with “The Force” leave one wondering about expectations from major funders including the Ford Foundation, MacArthur Foundation, Cal Humanities, and PBS, among others.  While the overarching message of the film is unclear, since it emphasizes aesthetic style over substance, the film consistently constructs the police as “good cops” earnestly doing the best job they can in difficult circumstances.  At the end of the film, attempts for department reform crash and burn during a major sex scandal in 2016 involving dozens of police officers and the firing of three police chiefs in nine days by Mayor Libby Schaaf.  Schaaf also briefly mentions the circulation of racist text messages among African American cops...  The mayor’s now famous statement about the need to “root out the toxic macho culture” of the OPD strongly suggests that the many attempts at police reform shown throughout “The Force” were a failure, but the film offers no analysis of this development.  The screen time emphasis on new recruits suggests a hopeful ending simply because of the new beginning/clean slate implication (a clichéd theme), but the relationship with poor residents in the City of Oakland by late 2016 is even more polarized.  Finally -- cue scary pulsing soundtrack – the concluding moments of the film are shot through the window of a police car moving through the city at night; slow motion images of blacks and Latinos staring back with menacing expressions imply that the City of Oakland has become even more frightening and ungovernable.  One point we can take away from the film is that the claim of an unbiased view results in more farce than force.

Robin Balliger, Ph.D.  is Associate Professor and Chair of the Liberal Arts Dept. at the San Francisco Art Institute.  Her current research focuses on the City of Oakland, particularly on arts, culture, and racial politics in the context of urban restructuring.