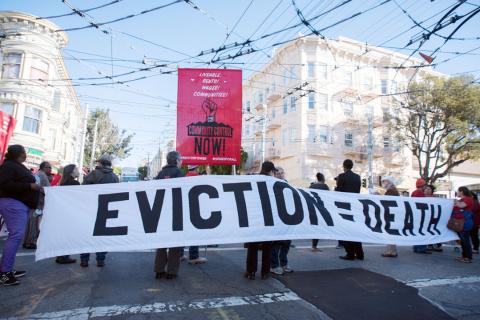 Under the banner of “Homes For All,” renters from coast to coast are pulling together in a national movement to demand a freeze on rent increases and an end to unfair evictions.1 Their National Renters Day of Action2 in fall 2016 announced that they are organized, united and ready to fight for their right to a stable home—and that their level of unity and resolve is more necessary than ever, now that a real estate tycoon with a documented history of discrimination and abuse of tenants is occupying the White House.

An alliance of diverse groups called Right to the City3 created the Homes for All4 campaign “to protect, defend and expand housing that is truly affordable and dignified for low-income and very low-income communities…”5 Homes for All coordinated actions in 48 cities on Sept. 22, 2016, declaring a National Renter State of Emergency. Some of the rallies involved hundreds of people like the one in Los Angeles organized by the Renters’ Day LA Coalition and the protest in San Francisco staged by the Anti-Displacement Coalition. Others were important for being the start of people coming together to make demands on housing issues. One such mobilization was organized by the statewide 9 to 5 chapter in Colorado whose members, working women, came together to rally as tenants for the first time.

For generations, there has been the myth of the democratization of land ownership, the unattainable goal for everyone to be able to own their own home, as foundational to the “American Dream. The rate of US homeownership peaked in 2004 at 69.2 percent and has since dropped to 63.4 percent, which is the lowest in nearly half a century.6 Many see this decline in homeownership as the rise of a “renter nation.”7

The national homeownership rate became inflated by a system of corruption, collusion and greed. A system of banks and the government-backed secondary market for home loans made home buying look deceptively easy. People across the country with no financial capacity to purchase a home suddenly found themselves living beyond their means. When the whole fraudulent scheme came crashing down, it nearly took the world’s intertwined economy along with it. So many millions of people experienced first hand that banks and the government never really meant to democratize land ownership, they only meant to profit from it. The whole system was a cynical exploitation of people’s dreams of stability and ownership. By far the hardest hit when the foreclosures started sweeping the country were Black and Latino families.

After that bubble burst, it only became re-inflated by the insatiable demand at the high end of the market made possible by the government using our tax dollars to bail out all the corrupt banks, and the simultaneous explosion of massive tech corporations paying extremely high wages so they could maintain an advantage over their competition. The real estate industry’s shift to the highest end of the market supported by this frantic race for highly specialized talent created an upward trend that landlords have twisted themselves around to take advantage of. Tenants who are at the moderate and lower tiers of the economic spectrum have found themselves at risk as landlords look for every law and loophole to get lower paying tenants out in order to replace them with high wage tenants. This phenomenon is not just contained to “hot market” cities like San Francisco, New York and Los Angeles where tech has a firm grip. As rents in these cities become expensive for all but the most lucrative companies, others trying to compete have had to attract talent to other more affordable cities like Nashville and Denver that have started to experience the same rise in rental costs and evictions as the “hot market” cities. Again, Black, Latino and working class households are the most impacted by rising rents.

Pressures facing renters are diverse across the country, from struggles in public housing to abuses by private landlords. Many tenants are also facing challenges that go beyond housing instability. Therefore, a number of the Homes for All members such as 9 to 5’s Colorado chapter are also involved in fights to raise wages, have better public transportation and access to work. As Andrea Chiriboga-Flor, Organizer for 9 to 5 Colorado said, “access to public transit is the lifeline for low wage working women,” so having housing that’s affordable near public transit is essential for getting out of poverty. Organizers at 9 to 5 Colorado are seeing low wage workers being displaced as new light rail lines are being built, so low wage workers are pushed farther away from work. Andrea says, “when they’re forced to leave, they live in outlying areas of the Denver metro area” farther from work and farther from quality public transit which is why the women they organize have started to identify housing as their number one issue. 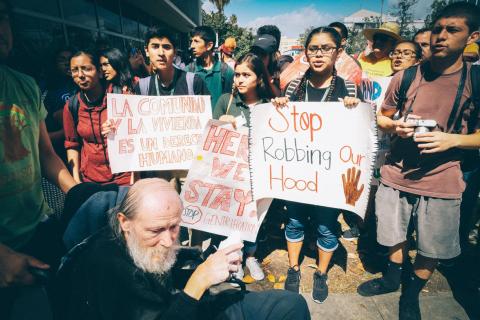 Farther west, issues for workers in Los Angeles are similar. Mike Dennis of the East LA Community Corporation (ELACC) said “Renters Day was born out of Los Angeles in response to a housing affordability crisis that has crippled the working poor – the very folks that make LA the great city that it is. Homes For All made a collective decision to scale up the Renters Day movement because these conditions aren’t unique to LA or California. Millions of renters are continuing to be marginalized, criminalized and oppressed through market forces that aim to extract profits over their human right to affordable and dignified housing.”

Each of the local actions made demands specific to the condition of renters in each area, but months of coordination led to Homes for All making the following set of global demands:

Shamita Granberry tells the story about how her landlord evicted her from her apartment in Nashville with no notice, and confiscated her belongings. Finding a new place that she can afford has meant putting her name on wait lists for public housing, Section 8, private apartments, any vacancies and opportunities she can find. She asks, “When you’re able to go to school, get your education, work, are able-bodied, and are homeless. How does that happen?”

She continues to ask further, “How would you feel if I came to your house and I said, ‘I want your neighborhood? It’s like someone coming to your home and saying ‘This is my street now. You have to go. You’re no longer wanted here.’ That’s what it feels like. It feels like our whole city’s getting evicted.”

The overriding issue is that housing, the basic need for all people to have shelter in order to survive, is not seen as a human right in the U.S. Instead, it’s seen as a commodity where the owner has absolute power, and any attempt to shift any control to a renter, to someone who doesn’t have any ownership standing is seen as an offense. Malcolm Torrejon-Chu, Organizer with the Right to the City Alliance said, “Housing as a human right is the internationally affirmed idea that all people need and deserve a safe home to be able to survive and thrive at their fullest potential. Sadly, in the U.S. and around the globe, the housing crisis is fueled by developers, politicians and speculators that prioritize corporate profits over this fundamental human need.”

Nearly 250 years ago, the founders of the United States retained the social stratification inherent in land ownership and all the legal systems that protect land owners which meant that tenants have less rights and less economic stability than those who own. Throughout the U.S., the gap between landlords and tenants is the same as the widening gap between rich and poor, and disproportionately has profoundly destabilizing consequences especially for people of color.

In addition to that high profile presidential race, the San Francisco Bay Area had a fistful of Rent Control and Renter Protection measures on local ballots.

On the positive side, Oakland, Mountain View and Richmond all voted to approve new or increased protections for renters. In San Francisco, voters rejected two cleverly crafted measures from the realtors that would have meant less affordable housing.

Of great concern for the movement is the fact that the new president is notorious for his evictions and abuses of tenants.8 He also has a history of excluding people of color and people with low incomes from renting in his buildings.9 The concern, now that Trump has been elected president is that he will support landlords who deploy such discriminatory and abusive business practices. His pick for Housing and Urban Development, Ben Carson, indicates that public housing will likely face a renewed assault.

Stabilizing renters means stabilizing communities, and our economy. Unfortunately, this is seen as a threat to the ruling class of elite landlords. It will take a sustained campaign and building a movement of renters acting locally and in coalition nationally to bring justice to this issue of systemic denial of people’s basic human right to housing.

Joseph Smooke is cofounder of peoplepowermedia.net, an online platform broadcasting community voices to impact public policy. He is also a program director with Housing Rights Committee of San Francisco, a member organization of Right to the City and Homes for All.