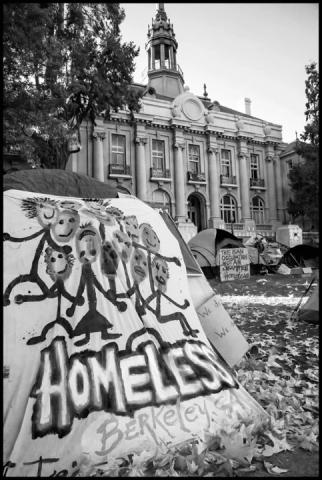 Michael Lee started living on the streets of San Francisco last May. He had traveled from Las Vegas to seek medical treatment. When he arrived, he searched for cheap, temporary housing in some of San Francisco’s most affordable neighborhoods, but he had seriously underestimated the cost of living in the nation’s most expensive city.

“I was under the impression the rent was $300 a month, and I brought the resources for 60 days,” he said in an interview. “I was going to go back to Las Vegas afterwards and go back to work. But the first place I walked into, they told me it was $300 a week. The next was $400 a week, and then $500. People were laughing at me—$300 a week is actually cheap on Skid Row. So I wound up living on the streets.”

Lee soon heard of a large encampment in Berkeley that homeless activists had set up to protest the US Postal Service’s (USPS) plan to sell Berkeley’s historic downtown post office building. So he moved across the bay and quickly became a leader of the Berkeley camp, advocating for a plan to transform the building into a community resource—“a homeless contact center run by homeless people.”

“Without community resources we can’t get a hand up,” said Lee. “There’s just no place to go. This is where we live, unfortunately—on the sidewalks. [But] we’re not going to be homeless forever. Eventually, we will recover from homelessness because we’re pretty determined individuals. That’s something that people with houses truly need to understand. We are going to be rejoining the community.”

After a federal judge granted the City of Berkeley a temporary restraining order against the sale and the buyer backed out, the USPS finally announced that it was shelving its plans to sell the building and by April 2015 the legal battle was suspended.

Half a year later, in December 2015, some of the people from the post office homeless encampment set up another larger camp a block away, on the lawn of the old City Hall, to protest a new city council plan to establish stricter rules targeting homeless people. This encampment, known as “Liberty City” or “Liberty Village,” while comparatively short-lived it was much larger and drew support from across the community. The city swept the away during the Christmas to New Year holiday season, scattering its occupants throughout the Bay Area.

Next, the USPS, working in collaboration with the Berkeley Police Department, dismantled the encampment on the post office steps on April 15, 2016, ending a 17-month experiment in ‘peaceful coexistence.’

Defenders of the old post office and homeless organizers are now strategizing next steps to create a self-organized community in Berkeley. 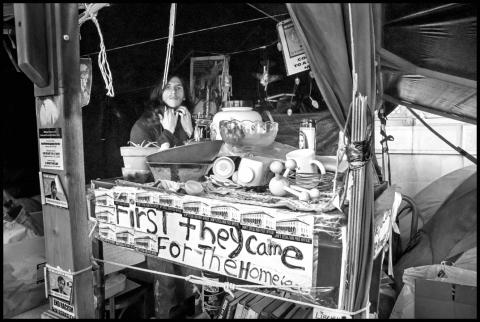 Occupied with Intention
Over the years, Berkeley, like most liberal communities, has been comfortable with the idea of the homeless as victims. But many Berkeley residents and business owners grow uneasy when homeless people organize and use the creative tactics of labor and civil rights movements.

Last year, Berkeley’s homeless people did just that. They created “intentional communities” or “occupations” like Liberty City and the post office camp, not just as a protest tactic, but also as places where they could gain more control over their lives and implement their own ideas for dealing with homelessness. Many drew on previous experiences with other movements.

“A lot of us are older activists,” Lee explained in an interview given while Liberty City was still operating. “Our ideas come out of the 1960s and even before, from the 1930s. Homeless people have always formed communities, whether we were considered hoboes, homeless people, or just bums. Hobo jungles were intentional communities too, based on an unconscious understanding of the need for mutual aid and voluntary cooperation.”

City Councilmember Jesse Arreguin, who is running for mayor this year, agreed that the residents of Liberty City did a good job of keeping it safe and well-run. “Liberty City shows that homeless people can create a community,” he said, but cautioned against such communities being completely removed from the city. “There should be an ongoing city presence that might include homeless outreach staff, mental health workers, or others.”

No New Housing in Sight
Nearly everyone agrees that the answer to homelessness is permanent housing but state and federal governments do not provide the necessary funding to build it. In fact, over the decades, national policies have eliminated housing for poor people and cost hundreds of thousands of jobs.

Local governments provide homeless shelters and services but they are unable to meet the needs of the huge numbers living on the streets for lack of money. Berkeley alone has 1,200 homeless residents, according to city officials. Furthermore, many homeless people don’t like shelters because they can’t bring their pets, or because they require you to be in and out by certain hours of the day. Consequently, cities like Portland and Seattle have approved the creation of tent cities as an alternative form of temporary housing. Berkeley’s own experience with Liberty City revealed that a tent city has the potential to work in the East Bay as well, but while Berkeley views itself as a progressive community, it remains to be seen whether it would ever approve a tent city plan.

At first, the fight against the USPS brought together homeless people, city authorities—including Mayor Tom Bates and Councilmember Linda Maio—and local legal and political activists in a loose-knit coalition. While rallies and court actions sought to block the building’s sale, the encampment on the post office steps became a visible evidence of resistance. The coalition, however, didn’t last beyond the post office battle. Some months after the USPS withdrew its plans to sell the building, Bates and Maio brought the homeless-crackdown ordinance, sought by the Downtown Business Association, before the council. 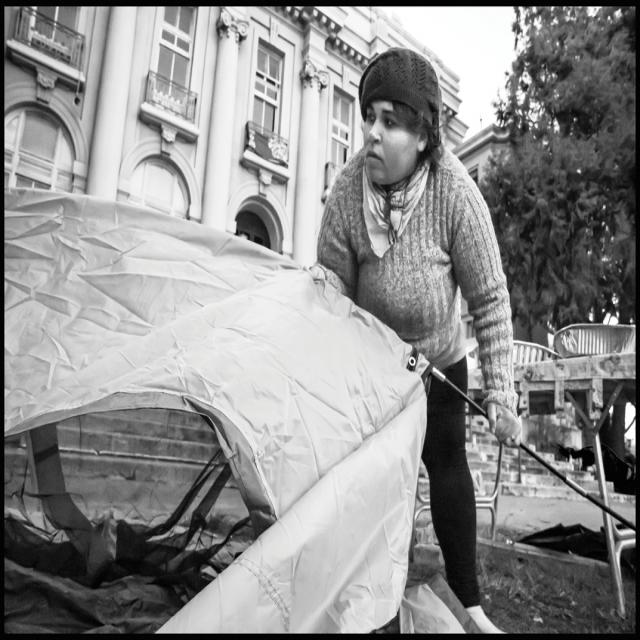 The new ordinance—passed on December 1, 2015—prohibits people from lying in planter beds, tying possessions to poles or trees or keeping them within two feet of a tree-well or planter, taking up more than two square feet of space with belongings, and keeping a shopping cart in one place for more than an hour during the day. It also further penalizes urinating and defecating in public, which are already against the law. Arreguin, who voted against the new ordinance, believes that homelessness has become an overly polarized issue in Berkeley, not one in which different parts of the community can find common ground.

“The business community would like to see people not camping out in doorways,” he noted. “Business people want a long-term solution. Homeless people did a good job on changing perceptions of homelessness at Liberty City. They set ground rules and enforced them. They had a process for that, where everybody participated in the meetings.”

West Coast Cities Consider Tents
A homeless protest and occupation in Portland last year evolved into Dignity Village, which now exists with the city’s approval. Portland, in fact, is debating the creation of new, similar encampments. The Seattle City Council has already approved three new tent cities, each housing one hundred residents, although they will be run by service providers, rather than the homeless themselves. They’re estimated to cost $200,000 per year in trash collection and portable toilets, but that cost is less than a traditional shelter. In Honolulu, which has also passed multiple ordinances cracking down on sitting and sleeping in public, Mayor Kirk Caldwell has set up a new homeless camp that is made up of shipping containers. 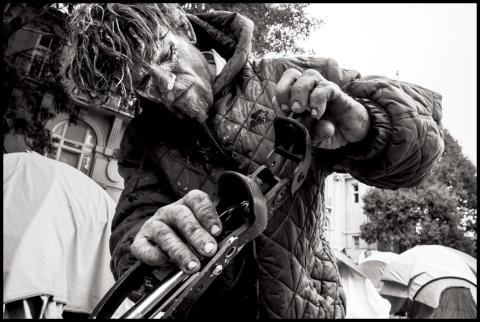 Berkeley had an earlier experience with a homeless camp, the Rainbow Village, in Cesar Chavez Park at the Marina. Mostly, it consisted of an area where people could park and live in their cars. After an incident in which someone was killed, however, the city closed it down.

“I do not believe that the Rainbow Village should be evaluated solely on that tragedy,” said Paul Kealoha Blake, director of the East Bay Media Center on Addison Street. “A close and collaborative relationship between homeless leadership and the City of Berkeley can work and was in fact working at Liberty City.”

One big question is where such a camp could be located. Rainbow Village was far from transit and services needed by homeless people. When Liberty City was in operation, Arreguin said his office got complaints from neighbors living near the old City Hall. “The camp had a spillover of people who were attracted to it and who engaged in inappropriate behavior,” he said. “Not everyone respects our laws, and the perception of homeless people is often based on those examples. But we need to be sensitive to the concerns of neighbors.”

For their part, most homeless people complain that they are demonized, and they established Liberty City partly in response. Many homeless people are also veterans and have to reconcile the irony of having fought for their country with finding themselves social outcasts in the nation they had defended.

“I spent ten years in the Navy upholding the Constitution, from 1979 to 1989,” said James Kelly, a former resident of Liberty City. “I believe a person should not have to worry day-to-day where they’re going to lay their head or get their next meal. That should just be a given.”

Andre Cameron, another Liberty City resident, said his experience here was dramatically different from the time he spent in Los Angeles. “In LA, they don’t have anything like this; they have Skid Row,” he explained. “A huge amount of people live on the street in downtown LA. There’s no help for them. Here, there’s a community. I feel the love here... there’s at least some hope. If I had to choose to be homeless anyplace in the world, it would be here in Berkeley.”

“It’s embarrassing, if you’ve never been homeless,” he continued. “People in LA look at homeless people like [they’re] a plague. Here, there’s more acceptance of this subculture of homeless people. I think it’s a tribute in some small cultural way to the community as a whole. I’ve never gotten that sense anywhere else.” 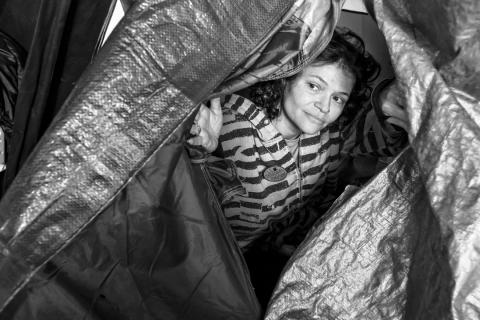 Ultimately, Arreguin says, the city needs to hear from the homeless themselves and treat them as normal members of the body politic. “When the city passed a law last year that criminalizes homelessness, there was no conversation about what the homeless need; the city didn’t have any input from them. But it can be done,” he said. “We do have a crisis, and all options should be on the table. Berkeley should consider a temporary encampment until we have more permanent housing. People need a place to go.”

Another Liberty City resident, Michael Zint, said that that he and other homeless activists were attempting to develop “an actual city. We have a community here. And if we can pull it off properly, we can use this as a model to be done all over. They’ll begin listening to our message, and that is that we should be able to take care of ourselves.”

Cameron added, “They should have a park, some sort of a space where people can set up tents and live peacefully, with port-a-potties and showers and trash pickup, and that’s organized. We need a place for people to be human—eat, sleep, utilize restrooms. That need doesn’t stop because of a law.”

And, warns Lee, “Homeless people can vote.” He’s aiming to put that proposition to the test and has launched his own campaign, running for Mayor of Berkeley.

David Bacon is a writer and photojournalist based in Oakland and Berkeley, California. For more articles and images, see dbacon.igc.org.