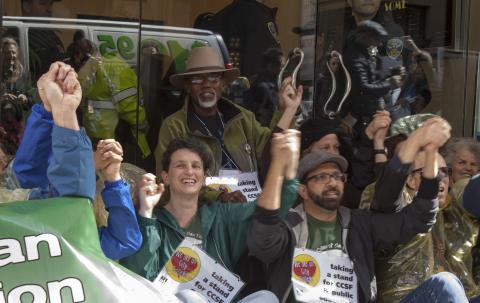 City College teachers went on strike on April 27, 2016. Their one-day walkout—the first in the school’s 80-year history—denounced the administration’s bad-faith bargaining, and the persistent, poisonous influence of the ACCJC with its downsizing agenda. “We’re not going to stand for the corporate-style school reforms this administration sees as the solution,” Latin American and Latino/a Studies Professor Marco Mojica told a student-led teach-in the week before the strike.

On strike day the teachers were earning 3.5 percent less than they did in 2007, although the cost of living in San Francisco has shot up 21 percent. Faculty took multiple pay cuts over the crisis years, some negotiated, some imposed. Layoffs, mostly due to class cancellations, have fallen especially hard on part-time instructors; 174 have lost their jobs, with nearly 350 threatened by the 26 percent cut in classes announced by the administration in late 2015. The paperwork and meetings required to comply with the ACCJC demands, on top of teachers’ regular workload, amounts to speedup, according to AFT Local 2121 Political Director Alisa Messer. “The faculty feel demoralized, not just disrespected but ground into the dirt,” she says.

Contract talks between AFT2121 and the Community College District began in February 2015; negotiations and mediation have proven fruitless. Under the administration’s proposal, most faculty would still be earning less than their 2007 wages by end of the contract in 2018, according to AFT2121 Vice President Alan D’Souza—although the college, by its own figures, has $57 million in reserves.[1] The divisive proposal also undermines 30 years of union negotiations aimed at reducing the gap between full-time and part-time faculty.

Labor and community supporters joined City College faculty for a rally in front of the Financial District law office of the college’s outside labor negotiator on March 11; 25 people were arrested for sitting in at the building entrance. Seven members of the San Francisco Board of Supervisors and representatives from two-dozen community groups signed a letter calling on City College to negotiate with the teachers in good faith. The Executive Council of the Associated Students at City College passed a strike-support resolution by an 11 – 1 vote. Students and community members swelled the teachers’ picket lines on April 27, and packed into a noontime rally at Civic Center.

Meanwhile, the administration appears to be under pressure to maintain its intransigent stance. The Accrediting Commission has a well-documented history of anti-union bias.[2] In July 2015, the Commission placed City College under “advanced financial monitoring.” A letter from the Commission to CCSF Chancellor Susan Lamb cited “Settlement in excess of COLA” as a key cause for concern. Accreditation standards include a requirement that schools “comply with Commission requests, directives, decisions and policies,”[3] which gives this letter considerable weight, even though it isn’t part of the official ACCJC sanctions. The unfair labor practice charge AFT2121 filed with the State Public Employment Relations Board contends, “The unwillingness of the District to engage in good faith, give-and-take negotiations… is clearly driven by ACCJC hidden or ‘underground’ criteria.”

Update: In August 2016, the members of AFT2121 ratified a new contract, which restores lost wages and provides raises for both full-time and part-time faculty. The San Francisco Community College District Board of Trustees approved the agreement Sept. 8.

Related Stories:
Education
Tweet
‹ Corporate Media Writes the Sound Track for the Attack on City College up Development for Whom? ›