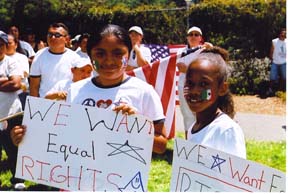 Last April, a group of African Americans and black immigrants in Oakland, California came together to form the Black Alliance for Just Immigration (BAJI). “BAJI was founded to support the demands of the immigrant rights movement and to engage African Americans in a dialogue about the underlying issues of race and economic status that frame United States immigration policy,” says co-founder Rev. Phillip Lawson.
But why are African Americans taking up the cause of immigrants, many of whom are breaking United States law just by being in this country? “We believe that African Americans, with our history of being economically exploited, marginalized, and discriminated against, have much in common with people of color who migrate to the United States—documented or undocumented,” Rev. Lawson explains.

Yet, more African Americans (22 percent) than whites (14 percent) say that they, or a family member, have lost a job, or not been hired, because an employer hired an immigrant. In fact, 34 percent of African Americans, as compared to 25 percent of whites, say that immigrants take jobs from United States citizens.

Since the 1970s, globalization has meant the de-industrialization of the United States, with union jobs in manufacturing being moved to low-wage countries in Latin America and Asia. More recently, it has meant the corporate outsourcing of jobs in the high tech and service industries. Add to that the historical employer biases against African Americans, the deterioration of the tax base due to white flight from inner cities, and the systematic public and private disinvestment in urban areas, and you have the formula for the devastation of black communities across the United States.

The True Cost of Free Trade
A clear example of the bilateral and multilateral international policies of the United States that force migrants to risk their lives to come to the United States in search of a better life is the North American Free Trade Agreement (NAFTA). Ratified in 1996, NAFTA forced Mexico to open up its markets to subsidized food crops from the United States. As a result, 2.8 million Mexican farmers could not compete with cheap United States commodities and lost their land and their livelihood (according to The New York Times). Many of those farmers and their dependents have migrated to the United States, looking for employment.

The United States is now attempting to impose a Central American Free Trade Agreement (CAFTA) on countries in the region. Similar, so-called free trade agreements are also being proposed or implemented in many countries in Africa, Asia, South America, and the Caribbean.
The United States media loves to show images of a few African Americans protesting “illegal immigration” with rightwing groups, such as the Minutemen. With classic, blame-the-victim logic, these misguided individuals have ironically cast their lot with modern day Ku Klux Klansmen.
So what are we to do? BAJI says that African Americans must join forces with immigrants to fight for economic and social justice for all.

A New Model for an Old Struggle
Unite Here Local 11 has set an important precedent for our struggle. In its latest settlement with the Beverly Hilton Hotel in Los Angeles, the 5,000-member, predominately Latino and immigrant union won a contract obliging the hotel to increase wages, maintain an employee health plan, and hire more African Americans. The victory is a model for negotiations with other Los Angeles hotels.

Gerald Lenoir is coordinator of the Black Alliance for Just Immigration (BAJI) and a long-time anti-racist activist.

Tweet
‹ The Fight for Quality Jobs: Our Battle Against Neoliberalism up Rights, Not Raids ›