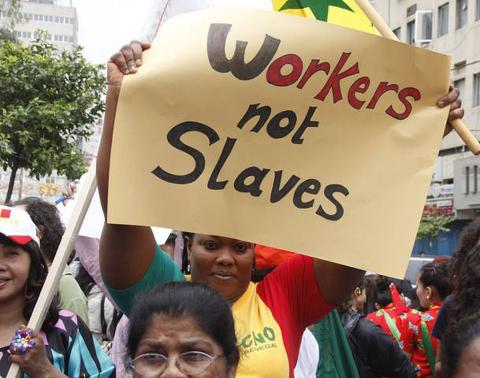 By Karina Muñiz and Claudia Reyes

When Francisca Vasquez first walked into the San Francisco offices of Mujeres Unidas y Activas (MUA) in late 2013, she had on her signature blue fishermen's hat with white trim, and her metal-rimmed glasses. She kept her eyes low to the ground and her hands tucked into her jacket; she would offer a faint smile, sip her coffee, and listen to the topic of the day at MUA’s general meetings. But soon she started to share her story—one that shows the link between domestic work and human trafficking, a connection at once too common and too often overlooked.

For more than 20 years, Vasquez had lived in isolation with a San Francisco family who had originally promised her opportunities to learn to read and write, and to adjust her immigration status. When she moved into their home, she had recently arrived from El Salvador, seeking work to provide for herself, her two daughters and other family back home. With each passing year, her conditions worsened.

For a full two decades, Vasquez worked around the clock, cooking, cleaning, and taking care of several elders in the home for a total of $500 a month—far less than she would have earned if she were paid the minimum wage and overtime required by California law. Her employers controlled her time tightly, barely even letting her go to the store to buy food. She lived in fear and isolation, made worse by the fact that her employer was a religious leader within the Latina/o community who painted a far different picture of her life to the outside world.

Vasquez’s case was referred to MUA by an ally organization, Asian Pacific Islander Legal Outreach (APILO), which heads up a referral network for human trafficking survivors in the Bay Area. With the encouragement of a co-worker, she bravely sought protection and a way out; she received a T Visa as a trafficking survivor, based on her work conditions.

But she was still owed wages due to her over the many years of wage theft by her employers. With help from the Legal Aid Society’s Employment Law Center, Vasquez filed a claim with the California Division of Standards Enforcement (DLSE), which enforces the state’s wage and hour laws. After a long investigation and negotiation process, she won $138,386.85 in back pay and overtime in a judgement issued May 7, 2015.

“The statute of limitations kept Francisca from receiving all that was owed to her, but this judgment is still a huge victory for her and for the domestic workers movement,” said Claudia Reyes, MUA’s lead organizer for workers’ rights. California has more than 200,000 domestic workers who provide services such as elder care, childcare and cleaning. The US as a whole has an estimated two million people engaged in such work, but given the numbers of undocumented immigrants who are involved, the real number is certainly higher. [1]

Vasquez’s case shines light on the plight of all domestic workers, who too often live isolated inside private homes, their vulnerability heightened when they are survivors of trafficking.

Most often associated with sex work, “trafficking” has a far broader meaning, according to the US Trafficking Victims Protection Act of 2000: “The recruitment, harboring, transportation, provision, or obtaining of a person for labor or services, through the use of force, fraud, or coercion for the purpose of subjection to involuntary servitude, peonage, debt bondage or slavery.”

Though national data is lacking, a number of smaller studies point to the prevalence of trafficking for domestic work, according to the National Domestic Workers Alliance’s January 2015 report, “Beyond Survival: Organizing to End Human Trafficking of Domestic Workers.” For example, more than one-fourth of the reports to the National Human Trafficking Resources Center hotline involved domestic work, making it the most-reported type of trafficking, as of August 2014.[2]

Trafficking amounts to modern-day slavery: Employers may deprive workers of wages, food and sleep, keep them locked in and cut off from communications with their families and the outside world, abuse them physically and sexually, and threaten them with deportation.

“When we think about trafficking, we need to understand not just the ways that traffickers snare people, but the broader situations that make workers vulnerable, and push them to migrate—domestic violence, poverty caused by global inequality, the violence of civil war and its aftermath,” Reyes said. “Our approach to solving the problem must involve basic workers’ rights, women’s rights, and immigrants’ rights, and solutions shaped by workers and trafficking survivors themselves.”

The International Labor Organization, a division of the United Nations, acknowledges the complexity of the situation facing the world’s 52 million domestic workers, most of them migrant women. The ILO’s Convention 189, “Decent Work for Domestic Workers,” calls for domestic workers to be recognized as equal to other workers, entitled to the same rights and respect. The Convention was adopted in 2011 after years of organizing by domestic workers around the world.

“Seeing this convention passed that recognizes our work, and leads to policy changes in countries that have ratified it, is tremendously encouraging for our work here,” said MUA Co-director Juana Flores, the US representative to the ILO, herself an immigrant domestic worker.

Today Francisca Vasquez wears a bright smile under her fisherman’s hat, and offers a warm embrace as she welcomes new members to Mujeres Unidas y Activas. She has spoken to an audience of hundreds about her case, and her story. She is an active leader that you can find at the front of May Day marches, actions against deportations, and is a strong voice in the fight for greater protections for domestic workers in California, and across the globe.

“I tell domestic workers they should demand their rights, and not stay in an abusive situation like I did,” Vasquez said. “They are not alone; other domestic workers and our organizations are there for support.”

By Karina Muñiz and Claudia Reyes

Related Stories:
Migrant Rights
Tweet
‹ With Our Own Might, Migrant Women Fight for Change up Scenes From Domestic Worker Organizing ›

END_OF_DOCUMENT_TOKEN_TO_BE_REPLACED
History of Exploitation: from Slavery to Domestic Work