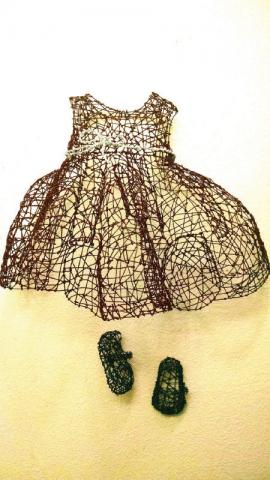 A little Black girl in San Francisco, that’s who I was. I was also a kid with a wild imagination, surrounded by a diverse community of people of all colors and cultures. I soaked it all in like a sponge and to this day, some of the experiences still nourish my soul.

I take great pride in saying I was born and raised here even though the city feels nothing like it did when I was a child. Yet, I find myself happy when I say I am here and from here, born in the middle of such a multifaceted place. The smell of incense, weed, patchouli… smells associated with hippies filled my nostrils before I was old enough to comprehend it all. You see, I was born in 1969 and lived with my family only one block over from Haight and Ashbury. My Mom tells stories of hippy neighbors and concerts in Golden Gate Park. Jefferson Airplane, Jimi Hendrix and Janis Joplin were a big part of my soundtrack when I was a child, along with Sly and the Family Stone.

A little Black girl in San Francisco, that’s who I was. Wearing a pressed cotton dress, white ankle socks edged with lace, and patent leather Mary Jane shoes to church with family friends. Being told to sit up straight, be still and behave. Sitting in a Baptist church near Hayes and Octavia on wooden pews, I watched stone-faced older women in black-and-white uniforms (like nurses) giving out paper fans. These stern-looking women wore white gloves and walked with their hands behind their backs. They covered women with squares of burgundy fabric when they “fell out in the spirit”. They carried smelling salts to revive those who passed out. They ushered people in and had a way of looking at children that stopped them in their tracks—one glance, and the whispering, the fidgeting, the giggles, stopped. I was that little girl watching everyone and everything, wishing I could get one of those paper fans in that hot church. I watched the woman next to me swiping the air with Martin Luther King Jr.’s face looking at me from one side of the paper fan fastened to a popsicle stick. My face hot and sweaty, I stared at the stained glass windows and listened to the rise and fall of the preacher’s voice, waiting for it all to be over.

This little chubby Black girl wandering all over San Francisco—that was me—with my Mom and my two brothers in a green Electra 225, with brocade seats. San Francisco was my city and we explored far beyond the four corners of my block. I found myself in the Fillmore, staring in awe through the shop windows at colorful men’s suits with matching hats and handkerchiefs. I was a kid of the 70s, and even though many people say the Fillmore had changed by then, for me it still held a certain soulful flavor. There were businesses that sold church clothes—fancy women’s suits and hats that were fit for a long Easter service. The smell of food filled the air. It was a smell that made you hungry even if you’d already eaten.

The smell of fried chicken and the sound of James Brown. I thought of James Brown as a family member because he was always present in my childhood. His music filled most of my days. Adults told kids, “Go put on James.” You didn’t have to be old enough to read because his face was on the record label. You simply needed to focus on not scratching that record because you’d never hear the end of it if you scratched James.
I was a curious child, always reading, often hiding behind a book in silence. If I sat quietly in the corner with a book, adults either did not notice me, or thought I didn’t hear them. While they thought I was preoccupied, I listened to everything they said. They talked about Vietnam and phones being bugged. About President Nixon and Patty Hearst. I did not fully understand why free school breakfast and the Black Panthers were considered a threat, until I got older. I remember asking my Mom why they were talking about people coming home with lost limbs. She told me something ridiculous, like “We were talking about a movie. Why don’t you go play with your doll?”

If I was quiet, I could listen to the inflections of people’s voices and recognize gossip. I liked listening to my Mom debate with one of our family friends. Inevitably, he’d say she was “doin’ that feminist talk” and she’d call him a male chauvinist. And while I had no clue what a feminist was, I knew from watching my Mom that I wanted to be one.

I was a little Black girl with white friends and Filipino friends, Russian, Jewish, and Chinese friends. I learned about race and class when I didn’t get invited to a rich white girl’s birthday party even though we played together every day at recess. I had an awkward moment when a classmate invited me over for a play date but never told her Mom I was Black. Her mother and my mother stood looking at one another in shock. Her mother was shocked by the Black people at her door. My mother was shocked by the Confederate flag hanging in the entryway. And so, this education of being Black in America continued to unfold for me.
Most of my childhood was spent living in Geneva Towers, a pair of 22-story buildings in the Visitacion Valley neighborhood. These buildings took on a major stigma in the 1980s as drug-use and crime took over.

However, my memories include feeling a rich sense of community:  packing like sardines into old elevators that constantly broke down; helping old ladies with their groceries; eating egg sandwiches and drinking red Kool-Aid while waiting 20 minutes for the elevator on a school morning. The sounds of soul music, the tidbits of conversation, and the smell of beans and ham hocks cooking—all revealed when the elevator doors opened. This was my Black experience.

I remember: buying the Sun Reporter from a guy in front of the grocery store each week; checking eight books out of the local library at a time; seing my Mom run a daycare out of our apartment; braided hairstyles with lots of beads, hair bobbles and barrettes; loud-talking people; government cheese; Farina; the dreadful sound of gunshots; dead bodies on the street; Henry the mailman; the school bus program; weekends with family friends who drove station wagons with wood paneling on the sides; FM radio.

My life included bean pies and Final Call newspapers. It also included schools in a middle-class part of town, going to museums and the zoo, learning to play a musical instrument, the San Francisco Symphony, Ghirardelli Square, working (as a teenager) at Pier 39, graduating from Lowell High at a time when many of the girls in my neighborhood were walking around with big pregnant bellies and a toddler on their hips.
I am this Black girl, this girl-turned-woman with dark brown skin and kinky curly hair, with wide hips and eyes so brown you can barely see the pupils, still taking in what’s happening around me and holding onto one thing I know for sure—never judge a book by its cover.