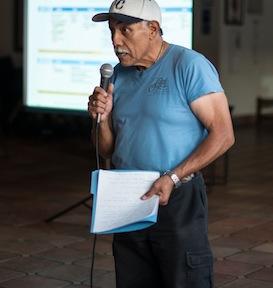 When his car broke down three years ago, Arturo Velarde decided he had more important goals in life than driving again. He has since been using the bus, mostly for work, but also for other things, such as getting to medical appointments at Santa Clara Valley Medical and getting his tax return done in Cupertino.

Still strong at 64, Velarde works for a staging company—the kind that dresses up homes for sale. He has been managing the inventory for almost half a year, but he doesn’t feel permanent enough in the job to take liberties. “My boss is very understanding but he can’t keep saying to me, ‘It’s okay to be late’—and he’s not going to pay me when I don’t work,” he says.

Velarde is fortunate to have a bus stop only three blocks from his home. He takes the #71 to work. By car, it’s a short hop, but the bus takes 20 to 22 minutes and if he misses it, he has to walk the eight to 10 blocks, which makes him late.

On weekends, the wait and ride can take 40 to 45 minutes, “because (VTA) thinks no one works [on weekends] and there’s no demand,” he says. But Velarde tries to live with it. Instead of whining, he’s systematic about riding the bus; he carries a map of the routes and consults the timetable posted at the stop.

“When the bus is late three to four minutes, I’d check my schedule sheet. It stretches to 25 minutes, I call the VTA customer support hotline posted on the wall. ‘The bus is late,’ they say, and I say, ‘I know that.’”

“‘It’s going to be there,’ they say, with no explanation. In 25 minutes, a bus arrives. But it’s the one scheduled to arrive after the bus I called about. You don’t know if the previous bus is down or if they decided to skip a trip to save money! I think the key points here are frequency and respecting the schedule.”

Like most veteran bus riders, Velarde is a realist and has often been in situations where he has to help himself. But even with the best plan, the bus still defeats him.

“I always arrive at the bus stop 10 minutes before the bus is scheduled to arrive,” Velarde says. “If it arrives later than scheduled, I catch it. If it’s the previously scheduled bus arriving late, I still catch it. If the bus arrives 20 minutes late, then I take the #271 to Eastridge, but I’ve already missed the #26 that will take me to Monterey Road.”

This is not the only problem. “One time, I was between jobs, and I had to ride a bicycle,” Velarde recounts. “I found this to be more of a hindrance than the healthy benefit they say it is because there’s only space for two bicycles [on VTA buses]. And I guess it’s up to the driver to accept more bicycle riders.

“One day, a bus driver shooed me away saying, ‘Wait for the next bus; I already have one bike!’ It was 11:00 and I had no choice but to wait for the next one, who would probably tell me the same thing. On that day, I decided to walk instead of bringing my bicycle to work.”

Velarde has been sharing his experiences with Transit Riders United as part of an effort to make the system work better for bus riders.

“I believe in changes and hope these all will be good changes that come out of this process,” he said at the TJA/VTA community meeting in East San Jose on September 9, 2015.