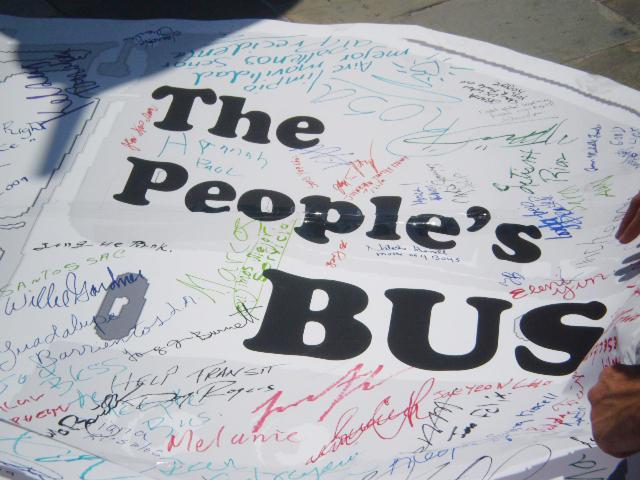 The bid by Mayor Antonio Villaraigosa and the Los Angeles County Metropolitan Transportation Authority (MTA) to extend an existing transportation sales tax until 2069 failed to meet the necessary 2/3 threshold, delivering a setback to the Mayor's gentrifying and polluting vision for transportation expansion.

Sunyoung Yang, an organizer with the LA Bus Riders Union, which opposed the measure says, “Despite a multimillion dollar corporate-funded ad blitz and misleading ballot language, substantial numbers of voters heard our message about Measure J.”

The Coalition to Defeat Measure J hailed the result not as a defeat for mass transit progress, but as a rejection of MTA's pattern of running roughshod over civil rights, environmental justice, and community concerns in favor of corporate special interests.

Yang explains: “This is not a denial of funds for the MTA. This result forces a shift in the debate on how to redistribute the ample funds from Measure R that MTA already has, with racial equality, social justice, and good transit policy for all at the core.“

According to Damien Goodmon,  a member of the Crenshaw Subway Coalition, “Black community, clergy, and civil rights leaders from South LA were palpably offended by Measure J and joined forces with other working class communities of color out of common experience and common purpose. MTA was asking us for more of our money while promising to spend not a penny in our community.”

The coalition forces have an alternative plan that they’d like to see put in place.  Specific policy changes mentioned by Yang include: Reverse the elimination of one million hours of punitive and racially discriminatory bus service cuts; return the monthly bus pass to $52; commit to a Leimert Park Station on the Crenshaw rail line; and cancel plans for the 710 tunnel.”

She calls on the MTA “to stop its alliance with the highway industry, stop its war with bus riders and let's sit down and work together to discuss a transit future for LA that includes everyone."

Eric Roman is an organizer with the Bus Riders Union in Los Angeles.