Right to Equity in a 21st Century City 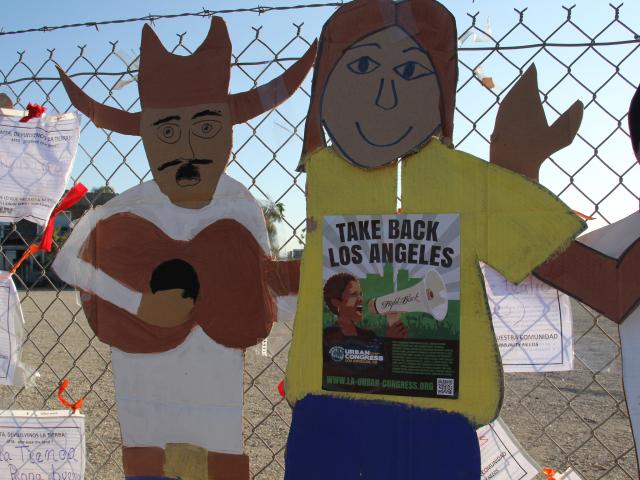 Holding up a giant banner emblazoned with the slogan “Take Back LA!,” a crowd of several hundred bus riders and renters marched to songs and chants led by the Bus Riders Union’s Drum and Chant corps. Among late afternoon traffic, they marched for over a mile from the Los Angeles Metropolitan Transit Authority’s (LAMTA) headquarters at Union Station to Mariachi Plaza in Boyle Heights, carrying signs demanding “Community Control of Public Land” and “Restore 1 million hours of bus service,” along with cardboard cutouts of brightly painted buses, houses, trees, flowers, and people.

Union, the East Los Angeles Community Corporation, Union de Vecinos, and the national Right to the City Alliance performed a theatre piece about two caped crusaders, Super Pasajera (Super Rider) and Super Inquilina (Super Renter) taking on Moneybags Metro (Los Angeles County Metropolitan Transit Authority). Following that piece of guerilla theatre, the crowd created an art installation on the fence of a vacant lot owned by LA Metro depicting bright buildings, community gardens, planter boxes, street vendors, and people in a community. When people were invited to write or draw the things that they wished to see in their community, the signs they tied with red and orange ribbons to the fence depicted a park, a butcher shop, and a youth and community center. The day’s activities closed with a community celebration on the plaza around the Metro Station complete with street vendors and dancing to local son jarocho and mariachi bands. By the end of the rally organizers had received an email, which was read out to the cheering crowd: a key demand had just been won and the local pharmacist would not have to worry about competing with a CVS in a planned development on Metro-owned land in the neighborhood. As one rally participant remarked, when combined with on-the-ground, long-term organizing and leadership development of impacted communities, “Direct action gets the goods.” 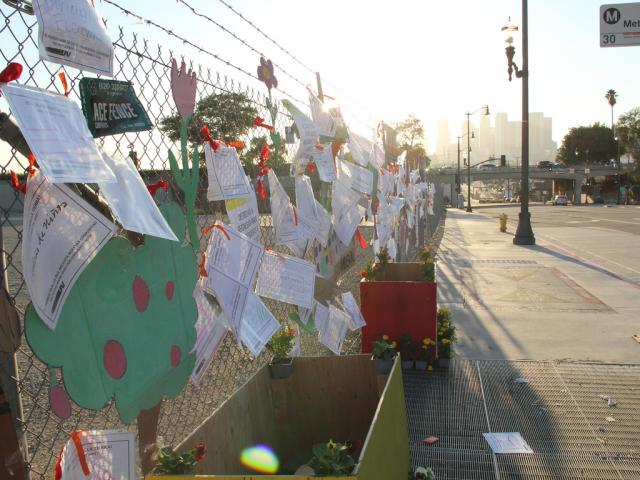 The action took place as part of a fifth anniversary, two-day national gathering of the Right to the City Alliance of grassroots community organizations representing what Rachel LaForest, executive director of the Alliance, calls “The best hope for the 21st century city of the future.” She defines these cities as just, sustainable, and democratic. (See story on Freddie Mac and Fannie Mae, “Forclosure Struggle Continues” on page 24). Community Control in Boyle Heights The march, theater performance, and art installation intended to highlight the role of LA Metro in making the lives of working families more difficult over the last decade, both as landowner and provider of essential bus services.

“In Boyle Heights alone, Metro has displaced 250 families, left empty lots to sit vacant for more than six years, and sanctioned private development plans that would bring in big box retailers at the peril of locallyowned small businesses,” explains Isela Gracian of the East LA Community Corporation (ELACC). In 2004, when the expansion of the Metro Gold Line into East Los Angeles got underway, Metro seized control of precious lands for the construction and demolished local businesses and housing. Metro’s growing real estate portfolio currently includes eight parcels of land in Boyle Heights that previously served the neighborhood, along with hundreds of other plots throughout the county.

The solution that Alma Salcido of Union de Vecinos offers is both, equitable and pragmatic. “Instead of giving publicly-owned land to corporations to serve their private interests, Metro should transfer the land back to the residents of Boyle Heights to determine how best to utilize it to address the community’s needs,” she says. “We deserve reparations for the fact that their actions displaced local businesses, reduced services, and created a loss of affordable housing in our community.” For former residents of Boyle Heights, reparations would include some version of a right of return to the neighborhood.

Public Transit for All is a Civil Rights Issue

The action was also designed to bring more community— and political—attention to the nearly 1 million hours of bus service cut from Metro’s operations over a span of three years.

Barbara Lott-Holland, a 27-year veteran rider of public transit and a member of the Los Angeles Bus Riders Union, argues that the loss in bus service is a civil rights issue that affects low-income riders and communities of color at a higher level than more affluent and white communities.

“After a year-long investigation, the Federal Transit Administration (FTA) found evidence that LA Metro knowingly discriminated against bus riders of color when they cut those nearly million hours of service from 2007-11,” Lott-Holland alleges. “This is why we say bus service hours must be restored as a civil rights issue.”

Five years ago, when the Right to the City Alliance was founded, fights around housing, transportation, and land were seen as separate by many of the organizations that gathered in Los Angeles in early 2007. Not any more, according to several of the Alliance’s cofounders. Gihan Perera, executive director and cofounder of the Miami Workers Center, says the city today is seen as the factory that produces social relationships that uphold or challenge capitalist power. How people are put into social classes, how race relationships play out, and the way cities work in the global economy—that is the main game, not a side issue to how capitalism changes and adapts and renews itself.

Gilda Haas, founding executive director of Strategic Actions for A Just Economy (SAJE), says that the importance of spaces in building movements that can scale up while remaining faithful to working against the root causes of capitalism, colonialism, imperialism, and racism requires that we continue to build “trust, alignment and vision.”

According to leading social theorist David Harvey, a distinguished professor of Anthropology and Geography at the Graduate Center of the City University of New York (CUNY): “Capitalist urbanization and the kinds of cities that got constructed over the last 250 years are a crucial part of the reproduction of a capitalist society. If there is a major challenge to how these cities are built and rebuilt, then that is a major challenge to the persistence and reproduction of capitalism and capitalist class power.”

If our vision for the 21st century city—our city, not the capitalist city—is just, sustainable, and democratic, then the Fannie Freddie 99 and MTA actions at the Los Angeles Urban Congress revealed some additional ingredients for success. Both actions were grounded in the community’s experiences and demands; and they were also prefigurative, confrontational, and creative.

Diana Pei Wu is a long-time organizer and technical assistance provider on issues at the intersection of racial, economic, and environmental justice and a frequent contributor to Race, Poverty & Environment.