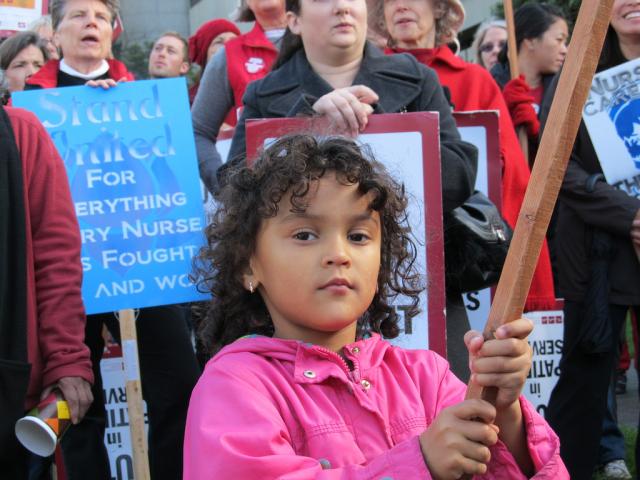 When it comes to organizing for health care as a human right, nurses far more often than doctors, are taking the lead in advocating for their patients. Nurses organizing gave us legislation to protect women who were able to stay longer in the hospital after giving birth; mandated registered nurse-to-patient ratios; improved protections for women survivors of domestic violence; and are at the forefront of many battles for better access to health care.

Every day, at the medical facilities where they work, nurses are first hand witnesses to health care practices that put profit above quality of care. Increasingly, hospital stays are cut short and essential medical procedures denied for cost reasons. Patients are removed for nonpayment of bills and services considered necessary are cut, even as the patient-to-staff ratios rise to dangerous levels.

So, it’s not surprising that nurses are at the frontlines of the battle for a more equitable and fair health care system, speaking out for the people’s right to access quality care and the rights of healthcare workers to do their jobs effectively.

While the reelection of President Obama and the 2012 Supreme Court ruling on the Patient Protection and Affordable Care Act both carry the promise of imminent healthcare reform, it’s not at all clear that it’s moving in the right direction.

Patient Rights Linked to Worker Rights
As a workforce, nurses have found it necessary to link the protection of patients’ rights to their own rights as workers because their struggles within a capital driven system often parallel the struggle of workers in other industries, but the scope of who is affected by their advocacy is very broad. We all need access to good quality health care and a unionized workforce has stronger political power to make those policy changes happen.

The California Nurses Association (CNA) represents over 80,000 RNs in more than 200 hospitals. They have a powerful voice in Sacramento and have been active in campaigns, such as the RN Safe Staffing Ratio law implemented in 2004, which research shows has helped reduce patient deaths and assured nurses of more time to spend with patients. The CNA is currently fighting to expand Medicare and implement single payer healthcare, and is also pushing for a Robinhood tax on Wall Street Trades—estimated to generate $350 million per year in revenue for the state.[1]

“When we say we’re advocates, we take it beyond the walls of the hospital and our patients’ bedside out to the streets,” says Liz Jacobs, communications director of the CNA. “We have to put on our sneakers, pick up the picket signs, and get our voices heard. Shutting down medical facilities and cutting service affects the community at large.” 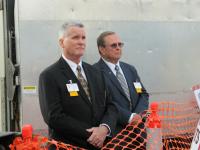 Corporatization Spurs Organizing
Nurses have not always had this kind of political presence. As a predominantly female workforce—although there is a growing number of male nurses in the field—nurses were among the lowest paid professionals just over a generation ago. But the CNA has been able to turn that perception around and nurses today are recognized as public service workers. Licensed nurses—both Licensed Vocational Nurses (LVN) and Registered Nurses (RN)—constitute the single largest occupational group in the health care industry.[2]

“It used to be that unions were all about Teamsters and blue collar workers, but nurses are out there protesting as well,” says Jacobs. “We are an activist organization, even though patient care never stops.”

In the mid 1990s, large corporate hospital chains began buying out local community facilities, eliminating the local hospital boards that were accountable to the community. The corporatization of health care meant that hospitals were now accountable to stockholders[3] and suddenly, the length of a hospital stay became contingent upon an insurance company’s willingness to pay instead of on the patient’s need. Looking to boost their bottom line, hospitals began to view workers as a cost in need of cutting, and massive layoffs ensued, followed by restructuring. And more and more, health care facilities—hospitals, labs, outpatient facilities, and elder care institutions—were staffed by foreign-trained nurses with temporary work visas.

“The nurses that were left were responsible for sicker patients who were in the hospital for less time,” explained Jacobs of CNA. “RNs started leaving hospitals because they couldn’t provide safe care. They were going against their profession and what they were trained to do. So you had a perfect storm for nurses to organize.”

Medical Redlining
St. Luke’s Hospital in San Francisco’s Mission District is a classic example of a nonprofit being run on a for-profit model. It was purchased by California Pacific Medical Center (CPMC), a Sutter Health affiliate, which subsequently announced plans to shut it down at its current location and open a new 555-bed, 1 million square foot facility at Van Ness Avenue and Geary Boulevard on Cathedral Hill for an estimated $2.5 billion. Advocates for St. Luke’s want to know why the hospital is moving to north of Market Street where there are already seven other facilities.

The answer is fairly straightforward: the majority of St. Luke’s patients are the working poor on Medi-Cal and don’t have a voice. (Studies show that hospitals catering to Medi-Cal recipients have reduced inpatient care and increased outpatient surgery to cut down costs.[4]) Like San Francisco General Hospital, the only other South of Market facility, St. Luke’s caters to an underserved population, specifically the Spanish-speaking population of San Francisco, which it has been serving since its inception.
Sutter Health has a reputation for buying up hospitals, closing them down, and reopening them as ‘boutique facilities’[5] in the more affluent neighborhoods.

It’s a form of medical redlining, according to Jane Sandoval, an RN at St. Luke’s for 27 years.[6] A Filipina American raised in the Mission, she was catapulted into advocacy over the fight to keep St. Luke’s open. Sandoval sees the hospital as a vital part of the neighborhood and considers the patients an extension of the community at large. Cuts in services and ultimately, the shutting down of the hospital for more affluent aspirations would mean that the patients—who are also Mission residents—have once again been discarded in favor of an affluent clientele.

“There is an assumption that as Asian women, we are not going to speak up, but we need to speak for the unspoken,” Sandoval says.

Also, in the current economic climate where many in the trades are out of work, Sutter Health has been pairing up with some of the more male-dominated trades and pitting them against the female-dominated nursing profession, she claims.
“[The trades] have argued for the project to be built,” Sandoval says. “They say they need their jobs. Well, we need our jobs too!”

St. Luke’s Failure Means Success for Sutter Health
CPMC had an agreement with the San Francisco Mayor’s Office that it would spend $300 million to rebuild a reduced but updated version of St. Luke’s on condition that its operating margin for the hospital not drop below 1 percent for two consecutive years. But documents leaked just before a San Francisco Board of Supervisors vote on the matter revealed that Sutter was considering an option to purposely drive down the hospital’s bottom line to trigger the escape clause and close St. Luke’s earlier than expected.[7]

“It’s a common tactic when they are running numbers,” notes Sandoval about the clause that incentivizes failure. “People’s lives are affected by the commoditization of health care.”

Sutter Health calls itself a not-for-profit organization and claims that unlike investor-owned health care systems, it reinvests money left over after employees and bills have been paid into health care.[8] What it does not reveal on its website is how much it pays its top level employees. Both CNA and the National Nurses Union (NNU) have noted that Sutter profits have reached $3.7 billion since 2005. Based on its 990 filings for 2009, Sutter paid CEO Pat Fry $39,992,642 and Vice President David Drucker, $2,535,081.[9]

As of last summer, San Francisco Mayor Ed Lee has put CPMC on notice that if Sutter Health does not keep St. Luke’s open in the Mission for another 20 years as originally promised, there would be no deal for the new development.

Nurses Keep Hospital Open, Sutter Retaliates
When the nurses secured their first major political victory in forcing Sutter Health to keep St. Luke’s open, the hospital chain tried to retaliate. Chris Hanks, a former director of Critical Care Services at CPMC, said in a declaration that he was told on a number of occasions, “not to hire any Filipinos.”

In 2010, a class action grievance was filed against Sutter/CPMC on behalf of the nurses, and CNA held a press conference where nurses and former nursing supervisors spoke about their first hand experience with the issue.[10]

A U.S. model of nursing in the Philippines has a long history. Western medicine’s so-called “power to heal” was used in part to justify colonialism. In the terms of the day, it was the “white man’s burden” to address the “suffering” among Filipinos (labeled as unsanitary and diseased), warranting U.S. colonial medical intervention, and giving the U.S. “righteous purpose” in the surveillance of their island.[11]

The fact that, among nurse-sending countries, the largest outflow of nurses is from the Philippines cannot be disconnected from this history. Today, as U.S. corporate wealth accumulates, push/pull migration factors remain steady. Nurses trained in the Philippines and here on temporary work visas face an even greater risk of exploitation.

Nurses have fought hard to have their voices heard. They, along with the LVNs, nurse’s aides, and other health care workers have been doing the heavy lifting in terms of keeping health care in the community.

On November 1 this year, over 3,000 RNs, along with several hundred respiratory, X-ray, and other technicians, held a one-day strike against seven Sutter hospitals in Alameda, Contra Costa, and Solano counties in response to reductions in patient care protections and nurses’ contract standards.[12]

Nursing, even though better paid than it was in previous generations, still remains women’s work. In many ways, the profession and its unions give a foretaste of what a caring social order could look like.  But sadly, under U.S. law, the bottom line remains the “terms and conditions” of employment, and the nurses’ power to set the agenda for a larger debate about health care and worker rights is an uphill struggle.

The fight goes on.

Karina is a freelance writer and political director of Mujeres Unidas y Activas.