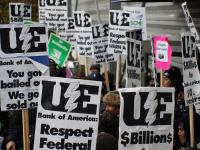 In December 2008, the Republic Windows and Doors Company of Chicago announced that it would be closing its factory because Bank of America had refused to extend a loan. Faced with the loss of their jobs, 200 workers occupied the building and refused to leave.

As Lalos, one of the workers explained: “Bank of America has a lot to do with the problem we’re having now. [It] is one of the banks that received billions of dollars from the government.”

The workers—members of the United Electrical Workers Union (UE)—did not have to go it alone, however, because while they occupied the factory in shifts, outside in the snow, other trade unionists showed their support.

Six days into the sit-in, Bank of America agreed to extend the loan to the company and following a unanimous vote to end the occupation, the workers left the factory through the front doors—declaring victory.

At the union’s headquarters in Chicago recently, Ricky Maclin, vice president of UE Local 10, looking back on the successful occupation, pointed out that in 2008, there were many abrupt plant closures in Chicago and all over the country.
“What made us unique was our decision to fight back,” he said. “After we won they tried to make it a victory for union workers, but it was much more than that, it was a labor victory.”

Labor Wins, Workers Dream, A Coop is Born
Soon after the occupation, the owners of Republic Windows sold the business to California-based Serious Materials. In February this year, the new owners announced their intention to close the factory down and once again, the workers decided to occupy the factory. They demanded that it be kept open for 90 days, to allow time for another company to buy the business and within hours, the owners agreed.

Armando Robles, president of the UE, supported the idea from the start saying: “If no one buys the company we could create a cooperative.” The idea being that a cooperative would not only conserve jobs, it could create new jobs and help the local communities.

The idea was very exciting to Denis Kelleher, executive director of the Center for Workplace Democracy, because Chicago does not currently have a manufacturing cooperative of that size. The Center began classes for workers from the factory on how to run a cooperative business where one of the most important skills is knowing how to make decisions as a group.
In May this year, the factory was incorporated as a cooperative under a new name: New Era Windows LLC.

“Through the unions we learned we had more control over our jobs, safety, wages—things that matter to our family,” said Maclin, who sees the cooperative as the next step for the labor movement. “Now, as a coop, we will be owners as well as workers. We will have that perfect model we’re looking for that’s not there yet.” 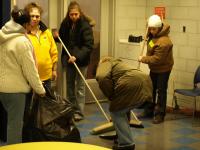 Workers Buy the Means of Production
Setting up the new cooperative, not surprisingly, has not been easy. After the second occupation at the factory, Serious Materials had agreed to sell the equipment to the workers if they could come up with the cash. That was the first obstacle. The other, was overcoming the general perception that the workers could not run the business.

Contrary to that perception, Maclin points out that most jobs actually run just great without bosses and supervisors. “Most of your supervisors don’t know as much as your [less educated] workers on the line!” he says.

But can they make a successful business out of a factory that’s already closed down twice? Kelleher believes that worker-controlled businesses are uniquely suited to handle challenges that often bring down the traditional business model. Because the business is owned by the workers, it’s more likely to try and cut operating costs before laying people off.

New Era Opening for Worker-Owned Businesses
New Era Windows would be the beginning of a new era—the first in a long time—for worker-owned businesses, Kelleher hopes.
“Chicago has a very rich history of worker cooperatives,” he explains. “Back in the late 1800s, much of the union organizing also involved worker cooperatives. When the Knights of Labor disappeared many of the coops disappeared with them. But the history is there. Right now, there are few coops in Chicago and that’s what we’re working to change at the Center for Workplace for Democracy. We want to help develop a more cooperative economy in Chicago.”

After the first factory occupation, Maclin took part in a victory tour of the country, giving talks in different towns and cities, encouraging other workers to take similar action. Now he wants to encourage others to follow the Chicago workers’ lead in taking control of their workplaces.

On his victory tour, Maclin frequently told the following story:
“Years ago, as a small child, I used to go to the circus [where] I saw this humungous elephant held in place by this small chain and peg [attached] to one leg. ‘How is that small chain holding that big elephant?’ I asked.

[And I learned] that they put that chain on the elephant when the elephant is small—so he really can’t move. So, you have this elephant who is able to move buildings but will not try to move this peg!

I look at that now as an adult and see that we the working force, the workers, are this huge elephant. And we’re being held down because we’ve been told that we can never win and that we are powerless. Well, the elephant in the room has awakened and is no longer going to be held down by these idiotic preconceived notions. We know in reality that the workers are the ones who make the world move.”

This story is based on a piece that aired on Making Contact, a radio program of the National Radio Project. George Lavender is an independent journalist based in Oakland, California. A producer for Making Contact, he also reports for Free Speech Radio News and Radio France International. Follow him on Twitter @georgelavender.