To have any hope of solving the twin crises of accelerating environmental degradation and growing economic inequality, we have to reimagine some fundamental assumptions in both the domestic and economic spheres: What is work? What is leisure? What is labor performed in our homes? How, as a society, do we organize our domestic and work lives so that we can meet our fundamental material and cultural needs?

Cooperative work places have long experience in organizing democratic governance for the means of production, but we need to move beyond industrial-era understandings of social relations. Democratizing the means of reproduction—the social sphere in which we meet the needs for education, health care, and domestic work—is an urgent task that can make another world possible.

In this issue of Race Poverty & the Environment, we feature the dreamers and the doers who are already reshaping our world and preparing for a more just transition. Here’s a sampling of the issues they are raising: 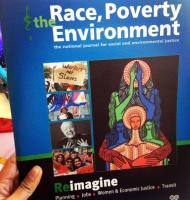 ing them out.. Can we imagine equity at the center of urban planning processes? (Rein, Saldaña and Wykowski, Castro)

Unionized public sector workers are under direct attack in the former industrial heartland of Michigan. Can the social movement unionism of the teachers in Chicago create new connections between community and labor strong enough to turn back corporatization? (Weiner, Fletcher)

Women’s legal right to contraception, health services, protection from job discrimination, and equal pay were established in the 20th century. Now the right wing is conducting a reactionary assault on those rights. Can we imagine how resisting exploitation of women in the domestic sphere can build new alliances that transform our lives at home and at work? (James, Kidd, Joaquin)

The typical corporate workplace is dominated by an unaccountable hierarchy that takes neither community concerns nor workers’ rights into account when making decisions that shape people’s lives. Can we imagine cooperative workplaces where goods are made, food is grown, building materials are constructed, and social justice organizing is conducted under the direction of the workers themselves for the benefit of the communities where they work and live? (Lavender, Casares and Mata)

In the wake of women’s entry into the workforce, an enormous industry of caring professions, including childcare, elder care, in-home health services, cleaning services, food preparation, and social services have become a substantial part of the gross domestic product. Can we imagine hospitals, home care service companies, and nonprofit organizations where the practices of the workers emerge from their direct connection to the population being served? And where unionized workers negotiate with boards elected from among the people being served? (Campbell)

In cities and states across the country, local governments are going bankrupt or deeper into debt paying exorbitant interest rates to banks to shore up core services because of a broken tax system. Can we imagine a government where the power to create the money supply is not used to capitalize for-profit banks that turn around and lend the money to local governments and homeowners at marked up interest rates? (Bond Graham, Clark)

In California, an untested cap-and-trade system has been adopted as a central strategy to reduce greenhouse gas emissions and create a revenue stream directed by the state government. But the program as it is being implemented has loopholes and pitfalls that may exacerbate the broader problem of toxic emissions and increase the environmental impacts for low-income people. Can we imagine a taxation system based on harm to the environment that actually benefits poor communities and increases their resilience? (Truong, Conant)

Neoliberal economic approaches are starving investment in sustainable development, education, and social services at the same time that capital reserves and the stock market keep climbing. The absence of transit-accessible affordable housing, the failure to transition to renewable energy, and the incessant drive to corporatize public service stem from a perverse incentive for speculative economic investment over development directed at meeting the survival needs of people and the planet. More deeply, the division of labor which separates work in the home from work in the economy is part of a centuries-old system of social control that has subsumed the commons—the natural wealth of the world—and the natural processes of human reproduction to economic imperatives that only benefit a narrow elite.

Women’s rights to equal pay, health care, and contraception were under attack in the 2012 election campaigns. The political conversation about &quot;legitimate&quot; rape and God's intentions around a raped woman’s pregnancy are outstanding instances of a misogynist ideology that has a deep commitment to women as servants in the domestic sphere—doing the unwaged work of social reproduction—while leaving the highly paid and powerful positions in the economic sphere in the hands of a tiny fraction of white males (with a sprinkling of women and people of color willing to collaborate in a system of economic and social domination).

The neoliberal system is simultaneously shifting debt into the public sphere, privatizing public goods and services and commodifying work that was done in the community. Women in traditionally female-dominated jobs, such as teaching, nursing, and domestic work are leading some of the best organizing campaigns in the labor movement. (Weiner, Muniz, Joaquin) And movement thinkers, such as Grace Lee Boggs, Sylvia Federici, and Selma James are challenging all of us to look beyond the last election or the next one to the roots of our social and economic organization. As Boggs puts it in her speech excerpted on page 44: “We have to re-imagine work and go away from labor. We have to reimagine revolution and get beyond protest. We have to reimagine revolution and think not only about the change, not only in our institutions, but the changes in ourselves.”