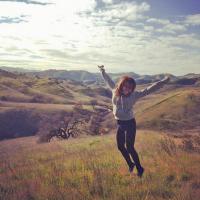 About five years ago, more than anything, I wanted to be a journalist who truly represented the voice of the people. A job at a corporate, mainstream publication never appealed to me. Today, I’m honored to have worked as the web and design editor for Race, Poverty & the Environment, a journal that has mirrored my passion for a myriad of issues in the realm of social and environmental justice. And it’s also great being able to say, I worked for Urban Habitat, “an organization that builds power in low-income communities and communities of color.“

But for 2013, I want to do more. It was Grace Lee Boggs that said, ”How we change the world and how we think about changing the world has to change.”

Another world is possible: a world that exceeds the confines of corporate institutions, the non-profit sector, and the current political system. A world that puts the needs, and the basic rights of ALL people at the forefront—no matter race, class, ethnicity, religion, or sexual orientation. From the rights of domestic workers, immigrants, women, people of color, and low-income people, to LGBT, teachers, students, workers… and the lists goes on. Selma James (p. 68) observes that our current model of work, “the activity women and men are forced to perform in order to survive… saps our time our energy and our life.“

As far-fetched as it sounds, we must create something new and do the impossible to make the world a better place. We must truly want it and then act on it, and be willing to sacrifice for what we believe in, even if it means quitting your job. I don’t believe a system structured for the sake of productivity, monetary gain, and capital can ever truly be transformed.

A few months ago, Urban Habitat held a communications/branding training workshop for its staff. We were asked to find words and phrases that define Urban Habitat’s vision, such as “change” and “transform.” But asking the powers that be to “change” or “transform” a system that’s doing exactly what it was established to do—a system built on the backs of slaves, corrupt institutions, imperialism and exploitation—negates our own power to imagine a new way of organizing our lives. Instead, we often find this power unattainable.

Gandhi, Martin Luther King, Dolores Huerta, Malcolm X, Gabriela Silang, Rosa Parks, were all just ordinary people who were passionate about what they believed in and made things happen against all odds.

Nonprofit corporations, funded by the 1-percent, did not lead the victories of the Women’s Suffrage movement, the Civil Rights movement and other social struggles. A common analysis, a collective will, and unity in action were the key ingredients in those movements, which inspired millions (Joaquin). And while the nonprofit form has a role in serving our communities, it clearly is not enough.

As I leave Urban Habitat—I have been laid off—I am saddened, and will miss all the great co-workers who have offered me encouragement and friendship. I want to especially thank my editor, B. Jesse Clarke, for being one of my great inspirations. Thank you Jesse, for everything you’ve taught me about life, production, design, publishing, politics, liberation, and so much more.

But even as I leave this job with its paid vacations and benefits to face an uncertain future, I am also grateful because I’m forced to do nothing but make my dreams a reality on my own terms and do good in the world. For those of you who want to be in touch or learn more about the next steps in my journey, visit me at eyesopenedblog.com.

Christine Joy Ferrer is the web and design editor of Race, Poverty and the Environment and founder and editor of Eyes Opened Blog.