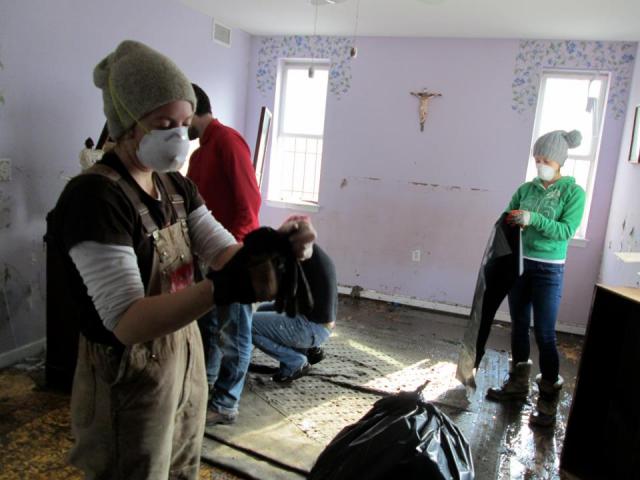 After months of silence on the presidential campaign—preceded by years of denial by big industry—climate change was forced back into the national political conversation last October by Hurricane Sandy, which swept across the northeastern U.S. A New York Times opinion piece entitled, “Is This the End?” ran with a photo of the Statue of Liberty underwater;[1] and a front page story in the San Francisco Chronicle noted that “water levels in San Francisco Bay could rise 16 inches or more by 2050, inundating shoreline habitat and infrastructure.”[2]

Meanwhile, 14,000 public-housing tenants in New York were left for weeks without electricity or running water in the wake of Sandy.
After President Obama’s reelection, California Senator Barbara Boxer predicted that several of her colleagues would be quick to introduce climate legislation in the new Congress—a move that had been considered political suicide since the Waxman-Markey bill was killed by a Republican Senate in 2009.[3]

But will legislation considered politically realistic be enough to address the scale and urgency of the climate crisis? And will it address the equity crisis? Imara Jones wrote in Colorlines, “Sandy smashed into the world’s wealthiest city but hit its poorest neighborhoods the hardest.”[4]

Climate change has been called the “greatest market failure in history,”[5] but as with all market failures, those most affected have historically been excluded from the benefits of the market.

“The reality of ecological disruption is that instability and unpredictability, not just in the climate, but in the economy itself, are the new normal,” says Gopal Dayaneni, an organizer with the Bay Area-based Movement Generation Justice and Ecology Project. “We have to innovate on our organizing strategies if we are going to navigate these changes.”

To that end, as organizers in New York set up emergency relief efforts following Sandy, Movement Generation released a statement calling for a focus on community resilience in the age of climate disasters.

“There will be many more shocks—acute moments of disruption, such as extreme weather events—and slides—incremental disruptions, such as sea level rise—that play out over longer timeframes in devastating ways, if we are not prepared,” they wrote. “The question is how can we prepare to harness these shocks and slides to win the shifts we need in favor of people and the planet?”[6]
The statement went on to cite the work of organizers from New Orleans to Haiti to New York and beyond, who offer both practical solutions and a larger vision of a “just transition” to “new economies defined by public transit, zero waste, community housing, food sovereignty, wetlands restoration, clean community-owned power, and local self-governance: all efforts that foster community resilience and to cut the carbon emissions and change the economic system that is driving global warming.”[7] 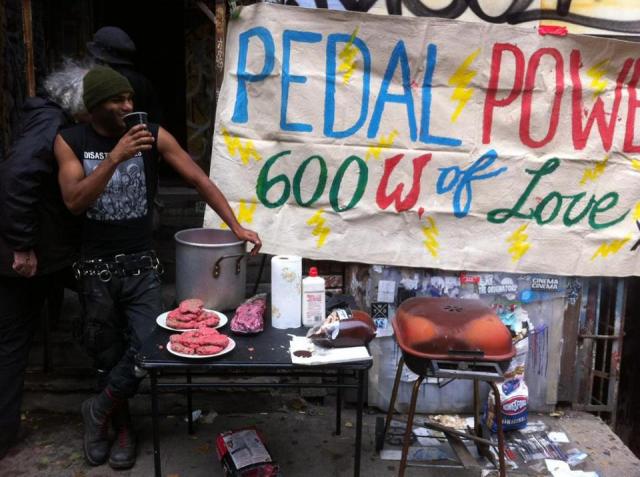 Frontline Communities Demand Real Solutions
“Communities on the frontlines of the climate crisis have never been silent about the solutions that will save our planet and our soul as a society,” says Cecil Corbin-Mark of WE ACT for Environmental Justice in West Harlem. “We have advocated for bus rapid transit, affordable safe housing and resilient communities, green jobs through public investment, and policies that cut and eliminate carbon.”
But resiliency-based responses to the climate crisis are nowhere on the mainstream policy agenda.

On November 14, as communities in New York and New Jersey were still shivering in the dark without electricity, food, or gasoline, one of the nation’s most closely watched efforts to regulate climate pollution—an auction of carbon emissions allowances—was launched in California as part of the state’s new cap-and-trade system.

More than 70 companies submitted bids for the price they were willing to pay to continue releasing greenhouse gases, with the price for a ton of emissions swinging as low as  $10.09, just above the $10.00 floor price set by the California Air Resources Board (ARB).[8] Of the total number of emissions allowances distributed, 10 percent were sold and 90 percent given away, in an effort to maintain a comparative advantage between California companies and out-of-state businesses, and to appease utilities.[9]

ARB Chair Mary Nichols declared the auction a success.[10] Groups, such as Environmental Defense Fund, agreed, noting that the demand for credits was a market signal that the cap-and-trade program was here to stay.[11]

Bill Gallegos, executive director of Communities for a Better Environment, rebuts those assertions. “The cheap price of credits in the recent auction came as no surprise—they follow the pattern that [occurred] repeatedly in Europe and offer an ‘out’ for big polluters like oil refineries to buy their way out of cleaning up local and global pollution without providing an environmental benefit. This system could even allow big polluters like Chevron’s Richmond refinery to refine dirtier grades of crude oil.”

Cap-and-trade means putting a declining “cap” on total emissions, while allowing trading of pollution permits. Regulators in California will set a ceiling on CO2 emissions from utilities, oil extractors, and fossil fuel-burning factories and require them to pay for their pollution by buying carbon allowances in quarterly auctions. In year one, the program is expected to generate between $660 million and $3 billion in auction proceeds. By 2020, cap-and-trade could send $8 billion into state coffers annually.

But will it reduce climate pollution?

Cap-and-Trade: More Loopholes than Benefits
Although environmental justice groups rallied to keep the fossil fuel industry from overturning AB 32 in a referendum in 2010, they have been deeply critical of cap-and-trade.

“Cap-and-trade has not been shown to actually work to reduce greenhouse gas emission,” says Sofia Parino, senior attorney with the Center on Race, Poverty and the Environment (CRPE).

Many cap-and-trade critics believe that the untested system is packed with loopholes and dangerous possibilities for financial gaming.
“CRPE and our communities are opposed to a trading scheme because of the inherent inequities for communities of color and low income communities, and the missed opportunities for real localized emission reductions,” Parino says.

These concerns led CRPE, along with Communities for a Better Environment, to take the Air Resources Board to court in 2011 to challenge AB 32’s cap-and-trade provision. The lawsuit eventually lost, leading some environmental justice groups to push for legislation directing a percentage of revenue from carbon allowances to vulnerable communities, enabling them to receive some benefit from the state’s new carbon market. (See story on SB 535 and AB 1532).

“The recent auction did not change our position on cap-and-trade,” Parino says. “A cap-and-trade system will not succeed in addressing the problem of superstorms. And, even if it were to reduce emissions, the reductions would not be enough to affect the changing climate.”

The most problematic aspect of the California system is that it allows greenhouse gas reductions to be made through carbon offsets rather than actual reductions in production.

Offsets are reductions in emissions made in one place or sector in order to compensate for emissions elsewhere: for example, a landowner is paid not to cut down his forest so that it can continue capturing CO2 from the atmosphere. Purchasing this offset allows owners of a coal-fired power plant to burn extra coal. While such offsets are considered indispensable to keeping cap-and-trade affordable, experience in Europe has shown no net reduction in greenhouse gases. By permitting burning above the cap for a given source, the likely result of a carbon offset is not a decrease in emissions, but an increase.

Overcoming the Fatal Flaw in Cap-and-Trade
Many of the climate policies promoted at state and national levels seek to tinker with the symptoms of the crisis without addressing root causes. Contrary to such approaches, Michelle Mascarenhas-Swan of Movement Generation says, “Our social movements need to be ambitious and bold—to articulate what is truly materially and culturally necessary to tackle the crisis at hand.”

A few bold organizing strategies that Movement Generation cites as key to building grassroots resilience include WE ACT’s fight for bus rapid transit and public sector jobs. There is also the work of groups—such as Right to the City, Grassroots Global Justice Alliance, Picture the Homeless, and Make the Road—to end displacement and economic inequity, which they see as integrally connected to climate change. The New York City Environmental Justice Alliance, for instance, works to protect communities from the compounded burden of toxic inundation when hit by storm surges like Hurricane Sandy.

There are widespread efforts to reclaim vacant lots for community gardens and build regional food systems by groups from Detroit to Haiti. “Zero waste” solutions are promoted by Ironbound Community Corporation, the New Jersey Environmental Justice Alliance, and the Global Alliance for Incinerator Alternatives, to create recycling and composting jobs while drastically reducing climate and toxic pollution from landfills and incinerators. And, as a direct alternative to the false promise of cap-and-trade, the Indigenous Environmental Network works to free indigenous lands and communities—and our collective atmospheric space—from fossil fuel development, such as tar sands and the Keystone XL, Kinder Morgan, and Enbridge Northern Gateway pipelines.

Such efforts do not fall in line with conventional legislative approaches, rather they mirror direct action strategies that are more common internationally—the land takeovers of Brazil’s Movimento sem Terra; or La Via Campesina’s international peasant farmers’ movement with its  slogan, “Peasant farmers cool the planet.”

“Social movements must be unafraid to put forth a holistic vision and real solutions, and build and model them in the world in a way that contests for power,” says Mascarenhas-Swan. “This means transitioning out of an economy that lets some populations and communities profit at the expense of others, toward an economy that works for people and the planet.”
That’s a far cry from cap-and-trading our way out of the crisis.

Jeff Conant is a freelance writer based in Oakland,CA and a frequent contributor to RP&E.