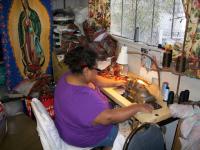 By Viola Casares and Petra Mata

Fall 2012 marked 20 years since the signing ceremony of the North American Free Trade Agreemhent (NAFTA) in San Antonio, Texas. The city held a two-day conference in November to commemorate the signing. It’s also 22 years since San Antonio’s Levi’s factory closed—throwing 1,150 women out of work. A 2011 report by the Economic Policy Institute estimates that almost 700,000 U.S. workers were displaced by NAFTA.1 In San Antonio, the workers fought back. –Ed.

On November 17, one day after the big NAFTA conference in San Antonio’s Northside, we at Fuerza Unida (Strength Together) were in the Southside, celebrating our first line of denim clothing, including “Jeans with Justice.” These aren’t just important because they represent our newest cooperative enterprise, but because our organization started when we lost our jobs making blue jeans for Levi Strauss.

We are two of the 1,150 women workers who lost our jobs when the Levi’s factory closed on January 15, 1990. We were laid off without notice and without fair compensation. When we worked in the factory, our eyes were closed. We knew nothing of politics. We didn’t know we had rights as workers, nor did we know how to organize. But when the plant closed, we began to organize together with other workers and allies to demand fair compensation from Levi’s and better conditions for workers in other plants.

Our campaign served as an example for workers in the same situation across the country. Most of us were Mexican immigrants with little education and limited English. But our story helped other women understand that they can organize and fight. We worked with women in factories from San Antonio to San Francisco. Thanks to our efforts, Levi’s provided a much bigger severance package to the workers laid off from plants that closed after ours.

Part of our response was to form Fuerza Unida, a membership organization that empowers women workers and their families to achieve social, economic, and environmental justice. We aspire to a world where workers, especially immigrants and women of color and their families, can take back their voices and live full lives with dignity and respect for their traditions and cultural values.

In the late 1990s, we got together and decided to organize all workers, whether or not they were Levi’s workers. We also began to concentrate on problems outside the workplace, responding to a variety of needs in our community. We currently do voter registration work and citizenship counseling, and hold workshops on domestic violence and immigration. We also provide health services, have a food program, and work with San Antonio’s youth. These initiatives have come out of our monthly meetings with community members who come to tell us about the needs and problems they face.

In our struggle, solidarity with groups both inside and outside the U.S. has been very important. This work cannot be done alone; we need to connect in order to help one another. The talks we’ve had, not just here in San Antonio but also in Albuquerque, Washington, D.C., and other cities, as well as in other countries, such as South Africa, Brazil, and Canada, have served to tell our stories. This is another way we resist and struggle against injustice.

In 1996, we started our own sewing collective with ex-Levi’s workers and other women from the community. We made pajamas, recycled handbags, scarves, and sweaters, and did alterations. Now we’ve started making denim jeans. With the collective we have a lot more control over our work. But we’re not just producing things; as we work, we talk about politics and anything that affects our community.

Through the sewing collective, we provide work and raise money for Fuerza Unida. We’ve developed plans to grow from six to 10 workers in 2013, and to 15 in 2014. We’re in the process of buying our own building. Our board of directors, made up of our members, continues its development for our joint growth. 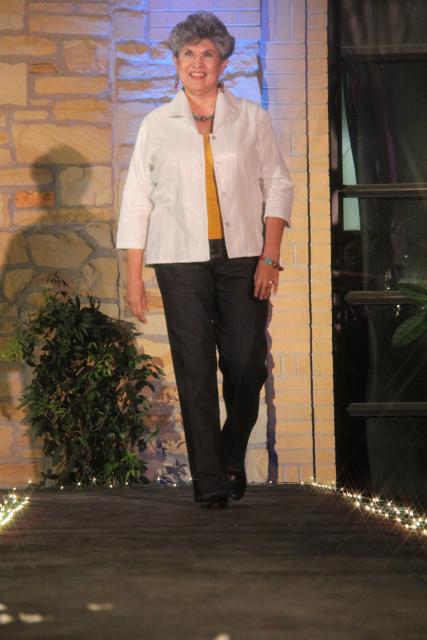 Fuerza Unida is maintained by its members; this is a key part of our process. Members pay an annual fee to receive educational workshops, access to the food program, plus a voice and a vote on the organization’s mission and programs. This organizational model, similar to a union, does not just build member involvement, it also helps members find ways to support themselves economically and guarantees them the right to guide the development of the organization. We’re all in the same boat and have the same vision of struggle.

Nelson Wolf, the mayor of San Antonio at the time NAFTA was signed, talks about all the jobs that NAFTA brought to the city. At the same time, across our nation, we hear about high rates of unemployment and how the middle class is suffering. People are talking about the struggle to retain Social Security, to provide health insurance to people who can’t afford to purchase it. They’re talking about the lack of plans and resources for retirement. We ask ourselves every day: “What will it be like for our kids?”
Some so-called leaders say that NAFTA created a lot of jobs, but that hasn’t been our experience. Since we announced that we’ll be making blue jeans many people have called looking for work . The workers who call us talk about the way they’re treated at their jobs, which means that there are no good jobs. The only jobs that NAFTA brought are the poorly paid jobs with no benefits.

It will take a lot of work to achieve our vision of justice and human rights for all. We need to continue the struggle if we want to live with dignity and solidarity. Having the right to vote is very important but voting is not the only way to get involved in social, political, economic, and environmental struggles. This is a constant struggle. It’s a way of achieving justice and hope—the hope that one day our people’s rights will no longer be violated.

Endnote
1.    Robert Scott. “Heading South: U.S.-Mexico trade and job displacement after NAFTA.” Economic Policy Institute. The report estimates 682,900 U.S. jobs have been “lost or displaced” because of the agreement.