Atlanta: Unsafe at Any Speed 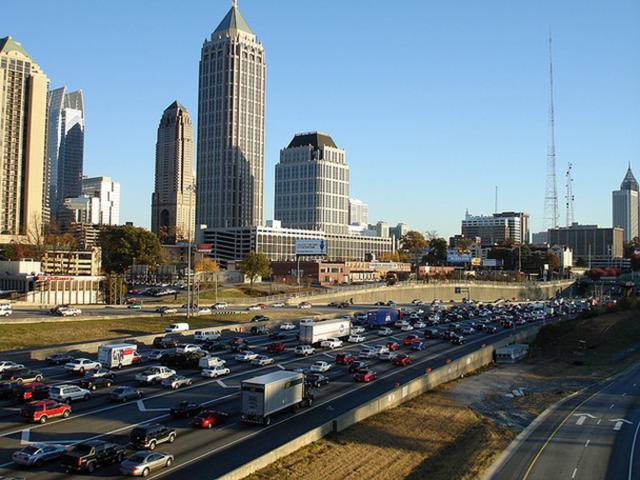 in July 2011, an all white jury in suburban Atlanta convicted Raquel Nelson, an African American single mother of three, of second degree vehicular homicide for the death of her four-year-old son in a hit-and-run incident on a busy thoroughfare. She was also charged with reckless conduct for crossing a roadway other than at a crosswalk and faced a three-year jail sentence.

The story is tragic and seemingly incomprehensible, especially when you learn that the driver of the vehicle was eventually caught, admitted to driving under the influence of alcohol and prescription drugs, had two previous hit-and run- convictions, and was blind in one eye—but received just six months in jail under a plea bargain. However, taken in the context of Atlanta’s history, the incident does not seem so strange and is a good illustration of the challenges Atlanta faces going forward.

Tragic Story
Nelson and her three children lived in an apartment complex in a northern suburb of Atlanta. Since she did not have a car, grocery shopping entailed catching two buses to the nearest WalMart with three kids—aged nine, four and two—in tow. On that fateful day (April 10, 2010), the bus was late picking them up from WalMart, which caused them to miss their connection. It being a Saturday, they had to wait an hour for the next bus and only arrived at their stop—located along a busy five-lane arterial where vehicles travel at 50 miles per hour—after dark.
The nearest traffic signal with a crosswalk being a third of a mile up the street, bus riders routinely crossed the street near the stop, and that evening was no exception. As Nelson, carrying the toddler and the groceries paused at the narrow median, four-year-old A.J. darted into the road. When Nelson attempted to pull him to safety, a van hit all three, killing A.J. and injuring Nelson and her youngest.

A few months later, the grieving mother was arrested and charged with vehicular homicide because, according to the county prosecutor, she had caused her son’s death by illegally crossing the street. Fortunately for Nelson, on July 26, 2011 a judge agreed to give her a new trial and she has since filed an appeal to get all the charges dismissed.

Atlanta’s History Shapes Present Realities
A.J. Nelson was killed on Austell Road, a state highway that cuts across suburban Cobb County, carrying around 40,000 vehicles per day. The traffic signals are spaced over half a mile apart to provide the least delay for drivers; and sidewalks, if they exist, are an afterthought. Whoever planned, built and expanded the road to carry an increasing number of cars never imagined the needs of people like Raquel and her children because suburban Atlanta was built for the car.

When the civil rights movement succeeded in integrating public facilities in Atlanta—schools, transit, parks, and pools—the white population responded by fleeing to the suburbs to create enclaves of private space. In the 1960s, about 60,000 whites moved out of the city of Atlanta while the population of Cobb County increased by 83,000 or 72 percent. Rapid economic growth in the region and subsidized mortgages made the suburbs—with low-density housing connected to commercial destinations by high speed arterials—affordable to middle class families. And post World War II investment in transportation infrastructure made the suburbs more accessible—but only if you had a car.

In 1965, voters in Cobb County—which was 94 percent white—rejected an option to join the newly forming Metropolitan Atlanta Rapid Transit Authority (MARTA) because they did not want the poor African Americans they had fled in Atlanta to be able to reach their communities. Similar decisions were made by two other suburban counties, which is why the heavy rail network is limited to the two counties containing the city of Atlanta. 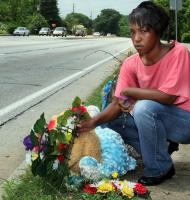 A Landscape Determined by Race Shifts
In 2010 when Nelson was staying in Cobb County it was only 56 percent white. After decades of white flight the demographics of the region changed; the poor and people of color were pushed and pulled out of the city. The majority of the economic growth in the region took place in the northern suburbs.  Despite the lack of public transit, workers were drawn to the job prospects. Middle class African American families left the city to escape failing schools and high crime rates. Immigrants from Latin America and Asia settled along a major arterial out of northeast Atlanta. The poor quality housing stock built immediately after World War II transitioned into affordable housing. By 2010, 85 percent of Atlanta’s poor lived in the suburbs.

In response some white households moved farther out to the second ring of suburbs or in some cases back to the city. In the 1990s the white population in the City of Atlanta started to increase, in part attracted by the public amenities of living in the city. Intown neighborhoods were gentrified and poorer residents forced out. In the run up to the 1996 Summer Olympic games, Atlanta began demolishing all of its public housing projects. The city is still majority non-white, but in the last census it lost 30,000 African American residents and gained 22,000 white ones.

The vast majority of low-income and minority residents have cars, as evidenced by the fact that only three percent of all trips in the region are taken on public transit. For the six percent of households that do not have a car, getting around is very hard because buses are infrequent—averaging once every 30 minutes during peak hours—and only about 12 percent of the region is accessible by transit. Like Raquel Nelson, transit riders in the Atlanta region tend to be the poorest of the poor—making only 37 percent of the median income of the region—and are overwhelmingly people of color. (Fewer than 20 percent are white.)

Transit is systemically underfunded in Atlanta and recently, one suburban county to the south cut bus services entirely. Owing to race and geographic politics, the state of Georgia does not contribute to transit operations, making MARTA the largest transit system in the U.S. without state assistance. The only dedicated source of transit funding is a one-cent sales tax in the two counties containing the city of Atlanta.

Transportation Choices, but not for the Poor
Nelson was riding on a Cobb Community Transit bus the night A.J. was killed. In response to the shifting demographics, Cobb and two other suburban counties started their own bus service and are now pushing plans to have rail service extended to them.

Historically, transit has been seen as a social service, a way to get poor people to the most basic of destinations, and not vital transportation infrastructure. But now, a coalition of environmental and business groups and elected local officials view rail as critical to Atlanta’s ability to compete globally and a way to relieve congestion on the freeways. They are pushing for a new sales tax measure to fund transportation projects in the region, half of which are transit.

Previously the transportation problem in Atlanta was defined by elites as congestion but the discourse is shifting towards providing more choices. Choices not for people like Nelson, who have to depend on infrequent buses and walk on unsafe roads, but for automobile users who cannot easily access public transit.

Although the discourse around transit is changing, none of the jury that convicted Nelson had ever been on a bus in the region—except for the special MARTA bus that shuttles fans to the Atlanta Braves games from the nearest rail station. (That service continued uninterrupted even when service for everyday riders was cut by 11 percent.) From their perspective as automobile users, the jury members could not understand the choices Nelson had to make or the risks she had to take on a daily basis, navigating the transit system with her children. They apparently believed that the onus was on her—the pedestrian—to avoid the intoxicated driver and that she should have walked the extra two-thirds mile to use the crosswalk.

Sadly, A.J. Nelson is part of a growing statistic; currently Atlanta has an average annual rate of 1.6 pedestrian fatalities per 100,000 residents. The increase is partially due to the mismatch between the transportation infrastructure and the needs of a growing population of low-income and immigrant residents in the suburbs. Families with children trying to cross busy multilane highways is a common sight, as are dirt paths paralleling roads where no sidewalks exist.

Infrastructure and Institutional Solutions Needed
Not much has changed on Austell Road since A.J.’s death. The transit agency put up a sign at the bus stop warning people to use the crosswalk up the road. But it is routinely ignored by area residents.

Atlanta needs to undertake a serious retrofit of its auto-oriented land use and transportation infrastructure to avoid repeating this tragedy and to accommodate or even encourage transit use. It is especially important now that the poor and carless are increasingly residing in the suburbs. The current push for new transit is focused on creating options for drivers, especially rail. But transit that focuses on serving peak hour trips or requires car access does not help the carless mother trying to get her groceries on a Saturday afternoon. Instead of choices, the solution needs to be accessibility for everyone.

In order for this to occur, the empathy gap between someone like Nelson and the members of the jury has to be bridged. Although they live in the same community, they have no concept of each other’s lives. Changing perceptions about transit as a mode will require changing the perceptions of people who use it. This means not ignoring Atlanta’s history of race and class divisions.

The ending of this story is yet to be determined; Nelson gets a new trial and Atlanta has the ability to change its path. Recognition of the institutional structure of inequity and a commitment to reversing this legacy in transportation and regional development policies can reshape Atlanta’s future.

Laurel Paget-Seekins has lived in Atlanta for seven years without a car and works with the Partnership for Southern Equity to develop and advocate for a just transportation and development policy. She has a Ph.D. in Civil Engineering.

Related Stories:
Transportation
Tweet
‹ Selma to Montgomery March: From Voting Rights to Immigration 1965-2012 up The Road Ahead for Atlanta ›