The right to vote is under attack all across our country. Conservative legislators are introducing and passing legislation that: (a) creates new barriers for those registering to vote, (b) shortens the early voting period, (c) imposes new requirements for registered voters, and (d) rigs the Electoral College in select states.

Although voter fraud is exceedingly rare, conservatives have been fabricating reasons to enact laws that disenfranchise as many potential voters as possible among certain groups, such as college students, low-income people, and minorities.[1] Rather than modernizing our democracy to ensure that all citizens have access to the ballot box, these laws hinder voting rights in a manner not seen since the Jim Crow laws enacted in the South to disenfranchise blacks following Reconstruction.

It should be noted that these proposals being introduced in states as different as Florida and Wisconsin is no coincidence. Rather, they are drafted and distributed by corporate-backed entities like the American Legislative Exchange Council (ALEC), according to an investigative report by the Center for American Progress.[2] Corporations, such as Koch Industries Inc., Wal-Mart Stores Inc., and The Coca-Cola Co. pay ALEC a fee for access to members of state legislatures, so that the corporate representatives and ALEC officials can work together with elected representatives to draft model legislation. As ALEC spokesperson Michael Bowman told NPR, the system is especially effective as legislators, “will ask questions much more freely at our meetings because they are not under the eyes of the press, the eyes of the voters.” 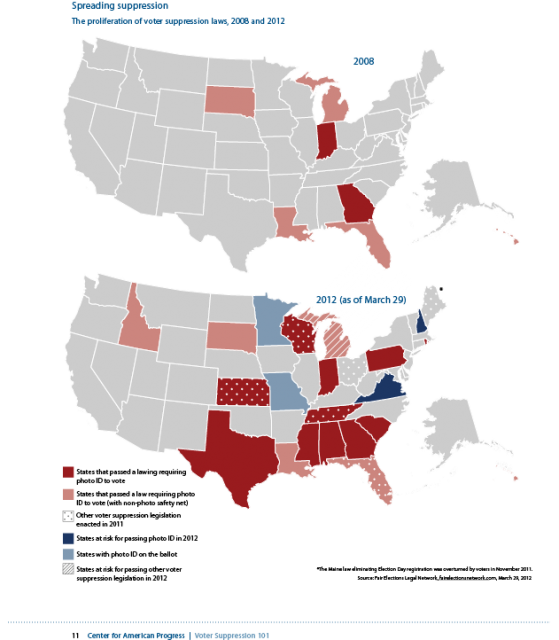 The investigative report also included a leaked copy of the model Voter ID legislation approved by ALEC’s board of directors in 2009. It prohibits certain forms of identification, such as student IDs, and has been adopted as the preferred model by both Tea Party organizations and Wisconsin’s Republican legislators, State Representative Jeff Stone and State Senator Joe Leibham.

Similar legislation had been proposed in Missouri and other states during the early part of the last decade, but it frequently failed to pass. Seeking new avenues, the George W. Bush administration prioritized the conviction of voter fraud to the point where two U.S. attorneys were allegedly fired in 2004 for failing to pursue electoral fraud cases at the level required by Attorney General John Ashcroft. But after three years of scrutiny of the 2002 elections, Ashcroft’s efforts had only produced 95 charges of election fraud. News reports from 2007, however, pointed out that simply “pursuing an investigation can be just as effective as a conviction in providing that ammunition and creating an impression with the public that some sort of electoral reform is necessary.”[3]

Having laid the groundwork, ALEC is now spearheading these antivoting laws anew. A number of nonpartisan organizations ranging from Rock the Vote to the League of Women Voters to the Public Interest Research Group, are challenging ALEC’s efforts. Additionally, the Department of Justice is reviewing some of the new state laws for possible violations of the Voting Rights Act in nine southern states because of their history of voter suppression in the past.

Speaking on the subject at the Campus Progress National Conference in Washington, D.C. on July 6, 2011, President Bill Clinton told the young audience that the reason why laws making it harder to vote were being proposed and passed across the country was that “They are trying to make the 2012 electorate look more like the 2010 electorate than the 2008 electorate.”

Conservatives are scared because more young and minority voters are entering voting age and their collective impact is growing accordingly. In 2008, about 48 million millennial generation voters—those born between 1978 and 2000—were old enough to vote. By 2012, that number will be 64 million, or 29 percent of all eligible voters. According to analysis by the Center for American Progress, by 2020, all of the millennial generation—about 90 million—will be eligible to vote and will comprise around 40 percent of American voters.[4]

Simultaneously, the number of minority voters has increased from 15 to 26 percent between 1988 and 2008.[5] These young and minority voters strongly support progressive staples, such as investing in renewable energy[6] and maintaining Social Security,[7] which affects election results. In 2008, young voters and Hispanics delivered two-thirds of their votes to President Obama.[8]

The growing influence of staunchly progressive voters has conservatives scared to the point of extreme measures. Backed by large corporate donors, they are looking for any proposal or law that will help negate this change in voting demographics. While this is their motivation, the right to vote is an American right that should be protected for those of all political persuasions.

Right now, the protection of anti-voter suppression measures put in place during the 1960s is preventing the enactment of the Voter ID law in key states. In some states, the issue will become a ballot measure whose outcome is decided by the voters, while in others, the laws have already been passed and must be aggressively challenged through legal and electoral measures, so that our system of democratic elections can get back on the right track.

END_OF_DOCUMENT_TOKEN_TO_BE_REPLACED
The Earth Is the Only One Telling the Truth