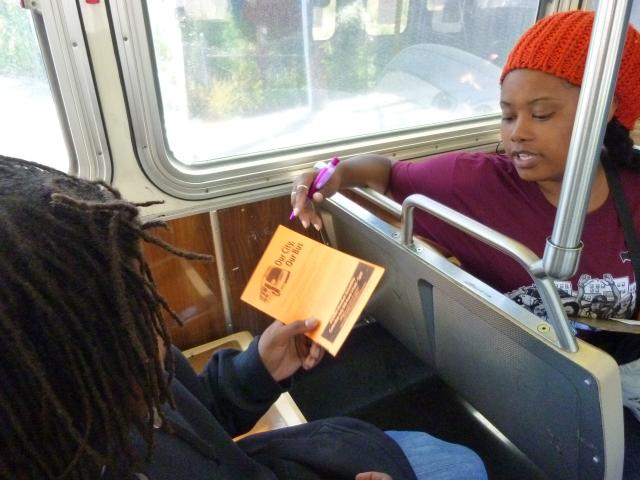 Originally from Bayview-Hunters Point in San Francisco, Yeashan Banks, 22, is an organizer for the Bayview Hunters Point Organizing Project at People Organized to Win Employment Rights (POWER). For the last year or so, she’s also been advocating for free public transportation for youth. In 2010, Banks graduated from the Movement Activist Apprenticeship Program with the Center for Third World Organizing and has volunteered for Congresswoman Barbara Lee and the Black Organizing Project and served as a Youth Researcher for the California Endowment’s Building Healthy Communities Initiative. She has also worked with Oakland’s Youth Uprising.

Christine Joy Ferrer: What motivates you to do the work that you do?
Yeashan Banks: POWER’s environmental justice project in [my neighborhood] is what first attracted me to the organization. The Bayview-Hunters Point toxic shipyard has been making folks in the neighborhood—specifically folks in my own family—sick for years. My grandfather worked at the shipyard and has asbestos-related lung problems. 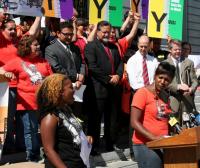 Ferrer: What are some of the issues that young people face through lack of access to public transportation?
Banks: If you have a single parent, or even just a working class family in San Francisco, then you know it can be really hard for your parent(s) to give multiple children a $21 pass or $2 for every ride they take.
A woman I organized with told me that one time her children came back from the bus stop because the bus driver refused to let them on without fares. She lives on a fixed income in public housing and can’t afford to pay. I remember when I was younger and didn’t have the [35-cent fare], I could ask the driver for a courtesy ride. It wasn’t as big a deal.
Now youth are getting criminal charges for not having proof of payment. I’ve seen kids at the Third Street station jump off the platform to get away from MUNI police. They are running straight into traffic. Or you see them hide from police, or not give their real name and address. They shouldn’t feel scared to ride the bus to school. If the city is cutting down the number of school buses, especially in low-income neighborhoods of color, like Bayview-Hunters Point, and your parents can’t afford to get you back and forth from school, it shouldn’t cheat you out of an education. Already, all over the city, they’ve closed down different schools [because of] low attendance.

Community Coalition Wins Key Votes On Transit for Low-Income Youth
On April 17, the San Francisco Municipal Transportation Agency (SFMTA) Board of Directors voted unanimously to make public transit free for the city’s low-income youth. If the Metropolitan Transportation Commission (MTC) votes at its June meeting to supply the remaining funding, the Free MUNI Youth Program will begin in August, 2012.
“The vote was a victory for community organizing and a victory for all the youth who stepped up and made this possible,” says San Francisco Youth Commission President Leah LaCroix.
A broad cross-section of community groups has been organizing since 2010 to make San Francisco’s municipal rail and bus system free for all the city’s youth. The coalition includes People Organized to Win Employment Rights (POWER), the Chinatown Community Development Center (CCDC), the Jamestown Community Center, the Youth Commission, Urban Habitat, and the San Francisco Organizing Project.
Rising transit fares and the San Francisco Unified School District’s (SFUSD) decision to slash school bus service lent urgency to the campaign. The cost of a youth bus pass more than doubled between 2009 and 2012, even as SFUSD planned to cut its fleet from 43 buses to 25 by 2013.
“It’s unfair for people to get kicked off the MUNI because they don’t have money,” Sebastian Alfaro, a middle school student, told the San Francisco Board of Supervisors. A member of the Community Leadership Club of the Mission Beacon After School Program, Alfaro was one of dozens of young people who have stepped up during the campaign—filling hearings at City Hall, sending video testimony when they could not appear in person, rallying, marching, and building support with social media. Their families have organized alongside them.
“As a single mother, the cost of transportation is a huge burden on my family,” says Estela Rosales, a member of POWER and a leader in the campaign. “The youth passes are a critical issue for low-income families like mine. This is about fairness and equal access.”

Ferrer: How is the lack of transit justice impacting young people in low-income and communities of color in Bayview-Hunters Point and other parts of San Francisco?
Banks: Right around the time we started this campaign [for free fast passes], a black male was shot in the back for not having his proof of payment. Kenneth Harding was riding the T-Train, which runs up from Sunnydale through Bayview to downtown. When he saw the officer, he ran. Shots were fired from both sides and he died. During routine fare checks, police are stricter and more belligerent in certain neighborhoods like Bayview and Mission, versus the Sunset. Transit racism happens in this city. More and more bus lines are getting cut in places like Potrero Hill, where public housing is located. When you talk to youth in low-income communities about organizing, they think, “But I need to work on getting a job right now.” Or maybe, their single mom is facing eviction from their home. They’d rather be investing their time into what they need at that moment. It’s a really long process to get a youth to understand the connection between what they’re going through and the system of oppression.

Ferrer: How does POWER organize youth and help them understand the connections between social, racial and economic equality?
Banks: We do a program at Balboa High School where we show youth that we’re organizing for free youth passes, but we also are educating them in movement history. After we win, these youth will feel empowered. [Then], they’ll want to further change things. It’s not just about free passes, it’s about connecting to different global struggles. You wonder, “Why am I fighting for youth free passes? I’m not a youth.” But it’s about getting people to start analyzing the system and thinking about why things are the way they are and what to do to change them. 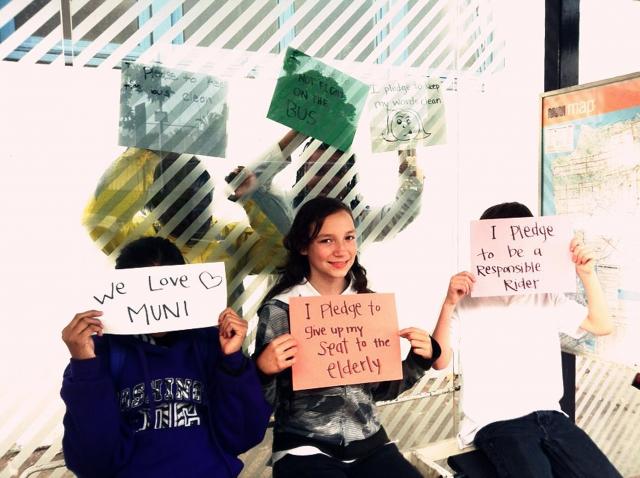 Christine Joy Ferrer is the web and publishing assistant for RP&E and founder of eyesopenedblog.com.